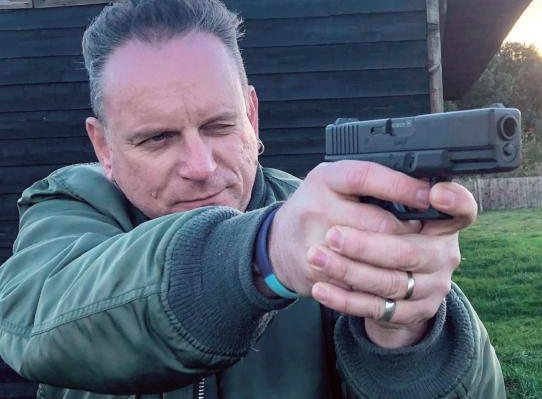 I’ll start by looking at how this 9mm service pistol was designed. Gaston Glock is an engineer from Austria, with a successful business making injection molding parts and components and he founded GLOCK Ges.m.b.H in 1963.

In the early 1970s, he started making products for the military, in the form of grenade casings, machine gun belt links and knives etc. He saw the need for a modern, semi-automatic pistol that could be used by the military, police and civilians alike and set about designing a suitable product. This all takes time and money of course but, in the early 1980s, his semiautomatic GLOCK service pistol was born. It uses a lightweight, polymer frame and was quite revolutionary and caused quite a stir in the media and there were even stories of it being able to pass through airport X-ray machines completely undetected; all rubbish of course, as the barrel, slide and 17 rounds of ammunition would all give the game away!

The Glock also used what was called the SAFE ACTION® trigger system that had the ‘safety catch’ as part of the trigger blade and the gun would not fire without depressing it first, before the trigger finger pulls the trigger all the way back. This has been very controversial over the years, as there isn’t a separate safety catch fitted, to the slide for instance. There are, however, two other safety features, the firing pin and fact that it will not fire if dropped. The Glock, with a round in the chamber, is completely safe, yet it is instantly available to fire at a moment’s notice, if necessary. The Glock 17 did however completely revolutionise the pistol market and several other manufacturers have tried and failed to knock it from its position, as the world’s most widely adopted handgun.

The Glock has a high-capacity magazine, holding 17 rounds in standard form, although there are other versions with shorter grips and in calibres other that 9mm that take less. It is made from lightweight materials and has a hammerforged barrel. The design has as few parts as possible, with an average of only 35 parts, which is significantly fewer than any other pistol on the market, for enhanced reliability; the fewer parts there are, the fewer part there are to break!

All these design and safety features produced an outstanding service pistol that can function is a wide variety of conditions and made it the perfect choice for the Austrian Army and it successfully passed a series of stringent tests to become the standard service pistol of the Austrian Army in 1983 and, in 1984, also passed the NATO durability test; this resulted in it being selected by the Norwegian Army as well. This really set the ball rolling and this quite remarkable pistol has gone from strength to strength, with huge demand from around the world. Such was its success that in 1986, the company opened its U.S. headquarters, GLOCK Inc. in Georgia. The US civilian market is huge and there was a need for smaller pistol, which was met initially by the model 15 but there are now versions chambered in a variety of calibres, including 45 ACP. The majority of US police department used to have revolvers as their handgun, but the Glock is now used by over 65% of federal, state and local agencies.

When the British Army decided that its Browning Hi Power pistols were getting rather long in the tooth, they also chose the Glock, in the face of stiff competition, as the L131A1; it is also used by a large number of UK police firearms teams.

Well, it’s quite a pistol then; so, how do we get to shoot one in the UK? Our knee-jerk pistol ban put paid to sports shooters being able to use them (on the mainland UK, that is) but help is at hand, thanks to those clever people at Umarex! I was at their state-of-the-art factory a couple of years ago and I asked why they didn’t make a Glock replica but was told that they could not make one, due to Glock being very protective of their design and they had actually sued several companies over the years for copying their pistol. Mr. Glock has a very god legal team, clearly, but Umarex managed to do the deal, probably due to their excellent reputation, and I first saw prototypes of Umarex’ CO2 powered, BB firing version at IWA earlier this year. There are actually a couple of variants but more of that later.

The item I have here is actually based on the compact model 19 that I mentioned earlier, that, in 9mm, has two less rounds in the double stack mag (why they didn’t call it the Glock 15 I don’t know!) than the Glock 17. A Glock 17 replica is also available, should you prefer the full-sized model. At 717 grams empty (1lb 9oz) it’s just about right and ammo and a capsule make it spot on when fully loaded. Just picking it up you can feel and see the quality and having been lucky enough to have been able to shoot real Glocks in the past, it’s really impressive! The moulding is perfect, with finger grooves on the front of the grip, panels of stippling on both sides and ‘chequering’ on the rear. The square trigger guard has a ridged front face and there’s even an extremely authentic looking alloy plate for the serial number moulded into the underside of the frame, just like the real deal.

As this replica is a copy of the latest version of the 19, it has a short section of Picatinny rail for mounting a laser or torch. The slide stop and stripping catch are dummies, as the steel slide does not move but the magazine release catch drops the mag in the usual way. The magazine doesn’t hold 15 rounds of 9mm Parabellum unfortunately, but the ‘stick’ mag, with its authentic base plate has a slim section at the front that houses 16 .177 steel BBs in a spring-loaded column. BBs are loaded by pulling down on the follower and locking it into a notch at the bottom; BBs can then be fed into the hole and, when the mag is full, the follower is pushed gently across to tension the BBs against the spring.

Gas up and go!

The 12-gram CO2 capsule is loaded separately into the back of the grip, by pulling the rear backstrap off. A tensioning screw is on the base of the capsule housing and a wrench is built into the top of the backstrap – neat! It pivots down when required and pushed up when not. Once the CO2 is on board, this little beauty is ready to use. Insert the mag and you’re away.

There’s no separate safety catch, as the trigger unit functions in the same way as the original and if the first, small section of the trigger isn’t depressed by the finger, the main part will not move. I checked (with the gun un-loaded of course) and it really is safe.

The trigger pull is actually quite nice, with a well-defined stop and a ‘click’ before it releases the shot and it’s well worth familiarising yourself with in by a dry firing session prior to actually shooting the pistol. The fixed steel slide is perfect and has all the correct markings, as befits a licensed replica and there’s a fake ejection port and extractor on the right side. The sights are very good indeed, with a nice, square notch at the rear with inset white lines to help with the sight picture and there is a white dot in the centre of the square section foresight. Pistol iron sight don’t get much better than this! The sights are non-adjustable by the way.

I set up some suitable targets and enjoyed blasting them and even some plastic cups left over from my son’s 18th birthday party got roped in as targets too. The sights, as mentioned, are very good indeed and the trigger is very easy to master. I’d much rather be shooting a ‘real’ Glock of course but that’s just not possible (especially in my garage!) but I really enjoyed my range sessions; shooting outdoors at Pete’s Farm was even better against more reactive targets; I do always wear safety glasses though – better safe than sorry. I was getting plenty of shots per capsule, so this Umarex Glock is quite frugal. Power is around 2ft/lbs, so plenty for what this replica was designed for – fun!

The Umarex Glock 19 replica pistol is very well designed and made and the ergonomics really are very good and I can see why the Glock, in its original, cartridge firing form has been adopted so extensively by military and police units around the world. Changing CO2 capsules is really easy, as is loading the magazine. At around £119.99 it is great value. BBs are great fun to shoot, as long as the usual safety procedures are adhered to and it’s well up to the job as a high-class plinker. There is another model available, which fires BBs and pellets and has a blowback slide and I’ll hopefully be testing it soon.