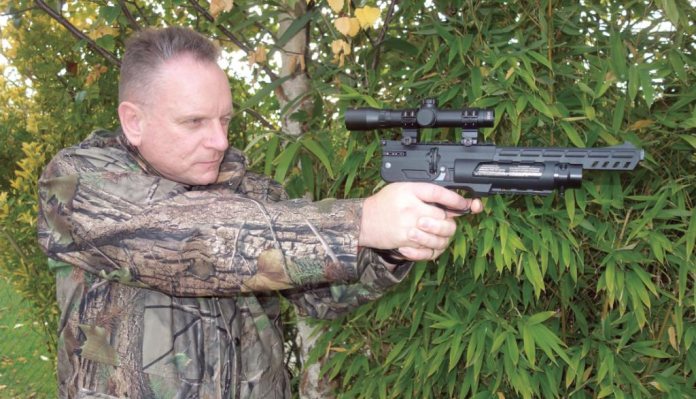 Weihrauch caused quite a stir last year, when they launched their groundbreaking HW 110 precharged pneumatic (PCP) air rifle. It was ground-breaking because it utilised a polymer action block, instead of alloy, which houses the barrel, magazine system, air cylinder, trigger unit etc. The synthetic action is considerably lighter than if it was made of alloy and the overall styling was bang up to date too, with an in-built Picatinny/Weaver rail on top of the action for mounting an optic and the overall look was very stylish indeed! Quite a few airgun companies have produced pistol versions of their PCPs in the past, some good, some bad. However, I can’t think of one that has all of the features of the HW 44 and I definitely can’t think of one that looks this damned good!

The Weihrauch backroom boys had obviously been hard at work since the 110’s launch and the end result is the fantastic looking pistol on test here. As you can see from the photographs, the HW 44 clearly uses the same style action as the 110, with its sidelever and 10-shot rotary magazine. The air cylinder and barrel are obviously shorter than the rifle’s but the ‘look’ is quite distinctive and a ‘family resemblance’ is clear when the pistol and rifle are next to each other. The 110’s stock is rubber-coated timber but the pistol’s grip unit is an absolute work of ergonomic genius! The synthetic grip is moulded in two stages, to allow the grippier material to be over-laid onto the tougher, inner core. This two-part process makes for a very tactile feel and those lovely contours allow for a very secure hold when on aim. The two-tone effect is a nice added bonus from the two-part moulding process.

A palm shelf is incorporated into the grip and the squared-off trigger guard has gripping ridges for a two-handed hold, whereby the ‘weak’ hand’s index finger rests on the front of the guard. Just in front of this is a six-slot section of Picatinny rail, which is just the job for mounting a laser. Above this there’s a section of synthetic that encloses the air cylinder; it’s cut away to reveal the pressure vessel and also to allow ‘HW 44’ and ‘Hull Cartridge’ (the official UK importer) to be seen on the left and the standard Weihrauch safety script on the right that tells you not to charge higher than 200-bar. The cylinder has an attractive black coating and the laser etched wording stands out well in silver. The section above the cylinder is a barrel shroud and once again there are attractive cut-outs moulded in. Weihrauch make their own barrels, so they can keep an eye on quality all the way through the production process and aren’t reliant on outside companies. I’ve seen the barrels made and a great deal of care goes into every one. Right at the front of the shroud, you can just see a blued steel unit with tiny threaded holes – more on those later…

The HW 44’s sights are as impressive as the rest of the pistol, with a blade foresight moulded into the synthetic barrel shroud and the rearsight is fully adjustable for windage and elevation via slot-headed screws. The sight picture is very good, with just the right amount of light around the square section foresight. There’s not a single blemish on the synthetic grip and Weihrauch must have spent a fortune on the moulds for this gorgeous bit of hardware!

No PCP will function without air of course and charging is a doddle. The pistol is charged via a probe and once the filler plug has been removed, the probe is inserted into the port at the front of the cylinder. The blued steel fill probe has a taper to the end, so insertion is much easier than other styles and that’s always a bonus! A fill pressure of 200- bar is specified and only takes a short time to achieve; 105 regulated shots at around 5ft/lbs are available per fill in .177, 125 in .22. An air pressure gauge is fitted to the front of the cylinder, so you can keep an eye on what’s left on-board. It’s nice to see a filling port cover, as some companies still don’t supply one. Dust and grit inside a PCP do it no favours at all, so it’s great that they’ve got it covered- literally!

If a scope or red dot are to be used, the 4½-inch long Picatinny/Weaver rail on top of the action is just the job. The pistol came with the optional silencer, which fits onto the end of the shroud and is retained via small grub screws into the blued steel unit that I mentioned earlier. The silencer, though slim, is very efficient, taming the discharge sound very well and I love the way the rear part is contoured to match the front of the barrel shroud- yet another neat touch.

The 44’s action, being the same as the 110’s, obviously uses an identical, impressive magazine system. Loading the removable magazine is very easy; first, the sidelever is pulled back and the safety catch applied by pushing it down to cover the red dot; the magazine retaining catch, at the rear left-hand side of the action is then pressed up. The magazine can then be pushed from the right and then pulled from the left of the action. The magazine is extremely easy to fill, as the pellets are simply pushed into the holes until all 10 are filled. To fit the fresh mag, the catch is once again pressed up and the wheel inserted from the left, where it is automatically retained when the mag catch is released – it’s a lot quicker than it sounds by the way! Pushing the sidelever forward loads a pellet into the breech and when on aim, the safety catch can be taken off by pushing it up and the trigger pressed. The pistol is set up for right-handed shooters, whereby the sidelever is mounted on the left, allowing the shooter to hold the pistol in their right hand and operate the cocking lever with their left. The HW 44 will however be available from the factory for all those left-hookers out there, with the sidelever mounted on the right. That ergonomic grip is completely ambidextrous, so no modifications are required. The two-stage trigger unit is a very swish affair, breaking cleanly and predictably from the box, although it is adjustable should it be required; I left it as it came.

The HW 44 really shot well and the recoil-free firing cycle makes for a very pleasurable shooting experience. Accuracy is top notch of course, as Weihrauch’s barrels are excellent, and using the supplied FT-Exact pellets, I got tiny groups on target. The open sights are superb but I couldn’t wait to fit the supplied, optional scope to really see how it shot. I obviously used Picatinny/Weaver rings and I soon had the eye relief sorted. The discharge crack is really muted by the optional silencer and I’d recommend it to all those who buy this fabulous pistol – it really adds to the overall styling too.

One thing I did notice, was the slight ‘clunking’ sound when the pistol is not cocked. This is the hammer moving slightly, as the HW 44’s internals are so finely tuned, the hammer spring can be relatively weak compared to other PCP pistols, so the internals aren’t under any stress at all - another indication of how well these pistols are designed and set up at the factory. I used the HW 44 a lot on my garden range and in the garage; I can’t wait to extend the ranges though and really see what it can do! The HW 44 could form the basis for a really neat little carbine with a longer barrel and air reservoir and an extended stock.

I own many, many pistols – spring, CO2 and pre-charged – and I can honestly say that, apart from true ‘Match’ pistols, the HW 44 is the best pistol I’ve ever shot! No exaggeration, it really is that good!

The ergonomic grip, sweet trigger, easy to load magazine and smooth sidelever make for a very pleasurable shooting experience and the regulated action provides a huge number of shots per charge and they’re bang on for consistency. I’ve probably spent far too much time lately shooting this little gem but I’m sure you’d understand why once you’ve had a go! At £620, they’re obviously not cheap, but for the air pistol connoisseur, they will be very popular indeed.