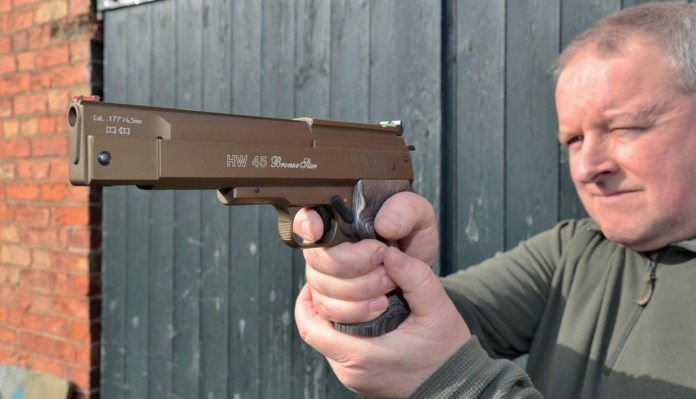 The HW45 has been highly successful for Weihrauch, so it’s hardly surprising that they produce several versions, all aimed at the enthusiast that appreciates quality and clever design. The very latest HW45 ‘Bronze Star’ builds on much the same spring-piston power plant as its ‘45 stable mates, but also comes with semi-target, grey laminate grips.

The model name is neatly laser etched in white across the left side of the action. It looks brilliant and contrasts perfectly with the bronze-coloured satin finish. But hold on. Do we still have to have that act of industrial vandalism, with a warning telling us to read the owner’s manual, also laser etched in white across the right side? It’s something we just accept on many airguns, but it somehow seems ultra crude on a gun as classy as this ‘45! OK, mini moan over! Back to the visuals. The overall look is classy, as that subtle bronze hue combines with the laminate of the grips. The result is a pistol that can’t fail to impress.

As someone who was lucky enough to be invited to the Weihrauch production facility in Germany a few years back, I’ve seen first-hand the level of care and attention that goes into the famous brand’s products, and it’s the build quality overall that sets them apart from many of their rivals. This HW45 isn’t exactly cheap, and it may even seem a tad pricey, but as has been pointed out to me on various occasions, all the same manufacturing processes go into producing a pistol, as goes into a rifle, only it’s all obviously scaled-down, so why should production costs be any different?

So, we’ve established that this model is aesthetically pleasing, but for those unfamiliar with the mechanical wizardry of the ‘45s, let me enlighten you. For those clever boffins at Weihrauch have devised a system where the action can be half-cocked for low power and fully cocked for high power. It’s fairly simple, yet brilliant in its execution. The action utilizes the up-and-over style of cocking, in much the same way as old Webley classic pistols, and we first need to pull back the hammer to release the top carriage. As for the dual power system, it works as follows. For half power, grip the top section of the action in a reverse hold, then pull it up and back to about 90º, until the trigger engages. Push a pellet home into the lip of the barrel, then close down the action until you feel it engage and seal. For full power, keep pulling all the way back, through about 140º. Then, chamber a pellet as before, close down the action, and you’re ready to go.

You don’t shoot a Weihrauch and expect a third-rate trigger, and the HW45 Bronze Star doesn’t let the side down, since it sports the standard unit used through the range. It’s impressive too, given that the 2-stage mechanism can be set with a fairly light first stage, and a commendably precise second stage release. The broad trigger blade is a big help, and everything just works well. The safety catch is ambidextrous, as in there’s one on each side of the action, and the good news is that it’s manual.

Another great feature with this pistol is the fact that there’s effectively a ‘dry-fire’mode, where you can feel the trigger trip without actually cocking the action or firing the pistol. For this, just pull back the large rear hammer, thus allowing the top carriage to spring up. Then, simply close the action together again, and you can now operate the trigger. Maybe not a truly representative trigger weight at this stage, but a nice training detail nonetheless.

In the aim, the weight of 2.7lbs feels just right, with a satisfying amount of front bias, helping the Bronze Star sit on target. Fibre optic open sights are fitted here, with a red element comprising the foresight and twin green elements forming the rear notch. The rear sight is fully adjustable for windage and elevation, but you do need a screwdriver for the task. As for the sight picture, it works really well. Sizeable dovetail rails run along the top of the action, so a compact pistol scope or red dot sight can be bolted on, as and when deemed necessary.

So, what of performance? Well, shooting on half power, the energy levels were around 3.6 ft/lbs, which is healthy. However, put in the extra effort to fully cock the action, and Weihrauch’s claim of this HW45 being amongst the most powerful pistols available looks about right. 5.5 ft/lbs on test against the legal limit for air pistols of 6 ft/lbs in the UK, certainly backs up that claim. But having now shot HW45s for some years, let me point out at this stage a fundamental observation. Namely, that shooting these pistols on low power is just a more pleasant and relaxed experience. Fully cock that action and there’s a significant kick (which I’m sure will appeal to many), but also more noise. Stick to low power and the corresponding cocking stroke is just so much easier, plus the shot release is slick and muted. Consistency was better on test and accuracy is probably easier to come by on lower power too. 7/8” groups over 10 yards was a good start, using AA Diabolo Field pellets, and from experience, I know I could improve upon that over time.

Of course, however you decide to use this pistol, just having the choice with the dual power system is a brilliant feature. It brings real versatility.

So, shooting this tasty little number was a pleasant experience all round, but it shouldn’t really come as a surprise given the pedigree of the maker behind it. Traditional engineering runs alongside CNC booths inside Weihrauch’s Mellrichstadt factory, and it’s this evolution and willingness to embrace technology where it best can be utilized, that has enabled the famous old brand to refresh and improve its products along the way. The HW45 Bronze Star is a prime example. It’s a satisfyingly clever design and a worthy addition to their range.