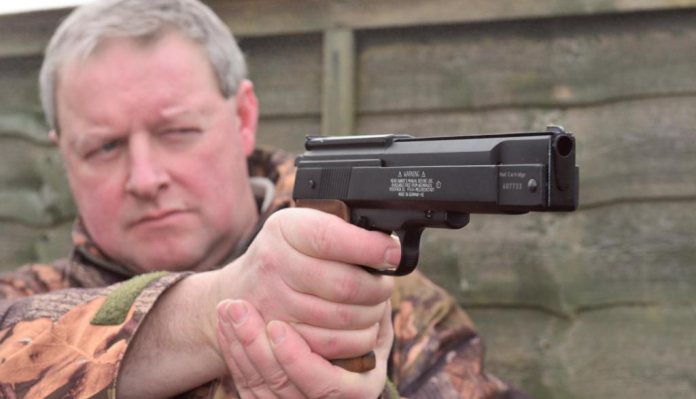 Admittedly, Weihrauch are one of the more traditional brands, with a very familiar lineup, which has largely stood the test of time with the company ethos more ‘slow evolution’, than any radical product development programmes. Why change things for the sake of it though? Indeed, work through their specific models and it seems that they have just about every base covered; all offering that unique Teutonic take on traditional gun making.

So, let’s remind ourselves why the HW75 remains such a successful model for this great German airgun brand. Aimed at the middle sector of the market, it has much to offer the serious pistol shooter, who doesn’t want to spend a fortune on top flight match kit, yet still wants a well-made, accurate performer, that rewards good technique and hard graft.

Externally, the HW75 looks similar to its spring-powered stable mate – the HW45 – yet what lies at the heart of the ‘75 is a near recoil free action, making it comparatively easy to shoot. My favourite singlestroke pneumatic system is utilised, and this gives this model a head-start over many rival mechanisms.

Lovers of the replica pistol will appreciate how the HW75 loosely follows the profile of the American Government Colt 45 service pistol, with that stylish squared off front section and integral trigger guard all playing along. This model has its own styling though, with the inclusion of those smart and highly functional walnut target grips, and these help to differentiate the 75 in a crowded market. Finish is up to Weihrauch’s usual high standard, with a particularly attractive matt black applied to the action, perfectly complimented by those attractive wooden panels.

Open sights come as standard, and whilst the 45 now gets fibre optics, I’m pleased to say that the HW75 gets simple, traditional metal irons. I prefer them, and whilst a minor criticism, would highlight that no finger wheels are offered, and that windage and elevation requires intervention with a small screwdriver, in practise, once they are set, there’s little to gripe about. A long sight line is afforded with this model, which helps maximise accuracy, but the addition of extensive scope dovetail rails along the top front section, is a real bonus, allowing for a variety of additional sighting systems to be toyed with. The specification also includes a 2-stage trigger and manual safety catch, and with these features being near identical to those fitted to the HW45, it’s difficult to criticise.

Okay, I can be a little tiresome on the subject, but I just love the whole single-stroke pneumatic concept. It really is the Holy Grail for me, in airgun terms, since it delivers recoilless shooting characteristics, yet in a selfcontained format. Generating full power in a rifle has proven the tricky part over the years, with guns such as the Titan Mohawk, Parker Hale Dragon, and Webley Paradigm coming close. I know it works in principle at full power, but getting a working prototype into a format that can be mass produced, has proved the stumbling block time and again. Full power projects have suffered, but no such problems for low powered pistols, and at around 2.5-2.7ft/lbs energy, the HW75 works perfectly.

To prime the action ready for a shot, first cock the hammer at the rear. Then press the small serrated catch just to the left of the hammer, and lift up the hinged top section at the same time. Now take hold of the top section and extend it all the way up and forwards. You’ll hear a small hiss as the arc of travel is completed, and this is the air being sucked inside the compression tube at the end of the stroke. Take a firm grip of the top section, and slowly but firmly close the action. It’s this return journey that compresses the air, and the 75 is now ready to fire.

One golden rule to remember with any singlestroke pneumatic is that it’s vital to extend the cocking arm to its absolute limit consistently, as this then guarantees an identical volume of air is being compressed each time. Do this, and the advantages of the system are obvious.

A 2-stage trigger is a big help, but given the lack of poundage to hold back, compared to a spring piston design, it should come as no surprise that this one trips beautifully. A light first stage and a pretty light, highly predictable second is just what the doctor ordered. The blade itself is nice and broad, with subtle grooves in the casting, and with a manual safety catch each side of the action, the ambidextrous credentials are maintained throughout. Adjusting the sights is irritating, as mentioned, given that a screwdriver is required, yet all worked well in practise, and is not a task that will be continuously necessary, once set up.

As for the feel in use, the firing cycle feels quick and slick, with little movement on firing. Obviously there’s no spring inside the ‘75 to bounce around. Instead, just a quick pulse of air expanding, which all feels extremely refined. Over the chronograph, the targetorientated HW75 displayed a superior air, with a total spread of just 7fps over 10-shots, equating to around 2.9ft/lbs energy. Reasonable output given the legal limit of 6ft/lbs, but let’s face it, power is largely irrelevant with air pistols. Of far more importance is accuracy, and here, I can confirm my test example managed 3/8-inch c-t-c groups using the open sights, and a ragged, enlarged single hole, once I had fixed a pistol scope in place for a thorough evaluation. Impressive then, and with that subtle trigger, great firing cycle, and the near recoilless feel, all combining well, it’s not difficult to see why this model has survived in the Weihrauch product listings, and continues to prove an easy best-seller.

Single stroke pneumatic airguns remain among some of the most enjoyable to use, and the efficiency of the system never fails to excite me. The HW75 is simply excellent- easy to use, and capable of very good performance, all in a very civilised, well behaved format. So yes, this truly timeless classic comes highly recommended. On that note, let’s hope that someone cracks the riddle of full power in a single stroke pneumatic RIFLE sometime soon! I, for one, can’t wait!