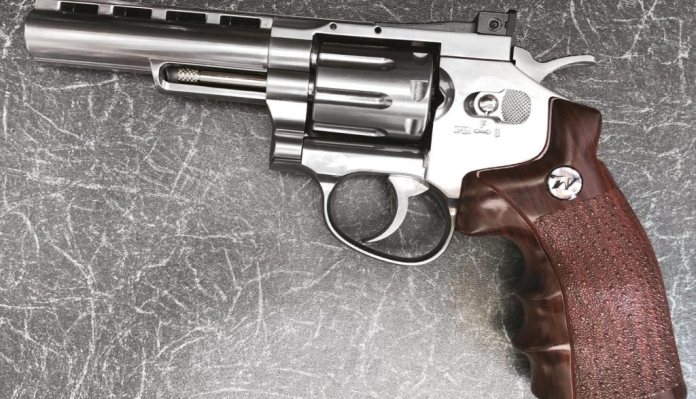 Ever since CO2-powered guns became widely available after the handgun ban, I’ve loved shooting them and new models seem to appear on the market every month! OK, that might be a slight exaggeration but there’s certainly a steady stream of new designs and styles to test, often based on real firearms, either semi-automatic pistols or double and single-action revolvers. This example caught my eye (and why wouldn’t it, it’s very shiny!) on the BSA Guns stand at the recent British Shooting Show. BSA now bring in a range of Winchester airguns and I’ve also got a couple of break-barrel springers here, but more about them next month.

The pistol in question, the Winchester 4.5 Special, is what I’d call a proper handful and the design and manufacture are simply stunning! The machining and finish on the frame, barrel and cylinder is better than some real firearms I’ve handled. And, at 2 pounds and 3 ounces, it has the authentic heft and feel that discerning airgunners desire these days. A lot of CO2 pistols of yesteryear were really quite shoddy in comparison and the mini ‘arms race’ in this sector of the market has been absolutely fantastic for the end user! You only have to look at Umarex’s Glock 17 Gen 4 that my fellow Editor (Pete Moore) tested last month to see what I mean. I’m not sure what the sales figures are for this type of gun, but they must be considerable, especially in countries like ours where ‘real’ pistols are almost entirely prohibited.

Looks-wise, the 4.5 Special is very much like the vast-majority of modern double-action revolvers from companies such as Smith & Wesson and Taurus, with a polished, stainless-steel ‘bull-barrel’ look and a ventilated top rib. It uses a swing out cylinder that is released via a chequered catch on the left of the frame; this component is actually a double function control, as it is also the safety catch. Pushed forward, against spring pressure, it allows the cylinder to drop open and then springs back into place once the thumb releases it. However, if you press it to the rear, it blocks the trigger and hammer, completely disabling the gun in its cocked or un-cocked position. Clever idea!

The trigger mechanism is single or double action, so the hammer can be cocked manually and the trigger then pressed to release the shot, or, the trigger pulled to cock and then release the hammer in one motion; the latter is harder to do obviously, as it is cocking the hammer and rotating the cylinder, as opposed to simply releasing the hammer. For more accurate, deliberate fire, single action is best, but for the sort of action this gun is made for, plinking and can mangling, double is perfect!

Before any shooting can begin, though, the pistol needs power and that comes from the good old 12-gram, CO2 capsule, available just about everywhere. This mini power source is housed, as is normal with this sort of pistol, in the grip frame butt and it shows some rather nice grip plates too. They may look like wood but are in fact plastic, or ‘synthetic’, as we’re all supposed to say these days! But the stippled rear portion and grooved front provides a great, hand-filling hand position and it’s as though the grooves were carved for me.

To load the CO2, It’s best to first apply the safety by pressing the catch to the rear. The rear of the grip is pulled up and back and a capsule is placed into the appature and the thumbwheel tightened until the payload is pierced and sealed. As always, there’s a hiss and a slight leak of gas, as it seals, but this is nothing to worry about and you soon get to know when it’s about to need a further quick turn. The rear of the grip is then pushed forward into the shooting position.

Press the release catch forward to put the pistol into FIRE mode and another press releases the cylinder and the ejector rod (housed beneath the barrel in a shroud) is pushed back to remove the inner, 8-shot pellet ‘wheel’. After a while, this becomes one fl uid movement. I guess that you could load the .177 pellets into the inner wheel in situ, for a more ‘authentic’ feel but it’s much easier to remove it completely. Once all chambers are loaded, the cylinder is closed and the safety re-applied. A pair of safety glasses are a good idea, as, even though this revolver fires pellets not BBs, ricochets can still happen, especially when shooting at reactive targets.

Initially I used paper targets to shoot at and was impressed by this little beauty’s accuracy, especially in single action mode, but then I set up a series of targets, tin cans, empty plastic drinks bottles etc. and set about having a thoroughly good time! I did have to move the rearsight over to the right quite a bit but that’s the whole point of having adjustables.

In single action, the broad, curved hammer was easy the cock with the thumb of the firing hand and the grooved trigger released the shot quite sweetly and, in double action, it’s possible to pull the trigger halfway and then let it trip, instead of just yanking on it. Accuracy in double action is much better this way and is only slightly slower than if it’s activated in a less refined manner. The sights line up perfectly, with just the right amount of gap between the foresight blade and rear U-notch.

This type of pistol only produces a couple of foot pounds of energy, but that’s perfectly OK for some informal target shooting and I was getting around 80-shots per capsule too, so simply replaced the bulb after 10 reloads. I found that flat head, or ‘wad-cutter’ pellets worked best and were easier to load than round heads and hopefully spare ‘wheels’ will be available soon. This cracking little pistol should sell extremely well, especially at the price and it deserves the ‘Winchester’ logo on the grip, as the build quality, handling and general performance are like you would expect from one of their firearms.