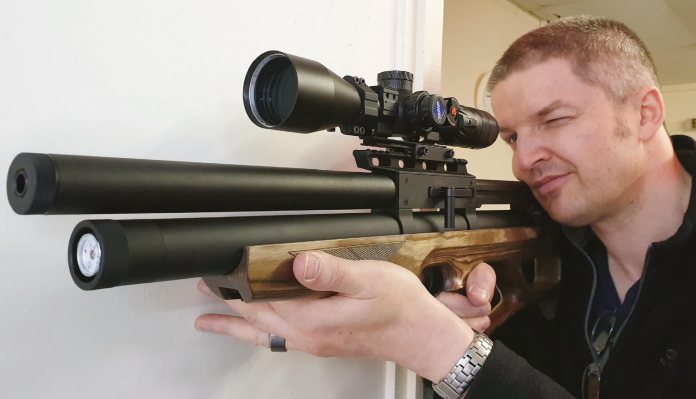 Russ Douglas reviews a new PCP Bullpup air rifle from the Czech Republic Ilove Bullpups, always have since long before my disability made me virtually dependent upon these extra-portable and practical designs. My fi rst was a converted Daystate Huntsman, courtesy of B&M Modifi cations in Staffordshire, a heavy beast intended for FT competitions.

A relatively new manufacturer to me is Airgun Technologies, or AGT. Based in the Czech Republic, they’ve been around since 2013. I’ve noticed their excellent products in both my YouTube and Instagram feeds. Several UK companies sell AGT rifl es, and they are imported by Regael.

Upon handling their latest full-size and weight PCP offering, the Vulcan 2, I was immediately taken by the chunky ambidextrous grip, which nicely fi lls my large hand. It’s 30” long, so rucksack or gun slip friendly and has a long, comfortable, grippy cheek-piece. The laminate, thumbhole stock is fi nished with thermal varnishing, includes neat chequering on both sides of the forend, plus a weight-saving cut out in the butt. This furniture is also available in a very attractive walnut and more tacticallooking black synthetic fi nishes.

The metalwork is immaculate throughout, with a fine crackle-finished, all hard anodised, including the cheek-piece. The chunky-looking, under-barrel reservoir is 37.8mm diameter and 290cm long and is cold to the touch but the cheek-piece feels less-so, suggesting alloy not steel. There’s a well-positioned, Biathlon-style sidelever making in-shoulder cocking a breeze. It’s possible to place it either right or left, although there are lots of fi xings to retain in the process, which is a really great feature.

I was lent the boxed review rifle and pleasantly surprised by the accessories included. First, a decent gun slip without a sling, although with ‘shopping-bag’-style handles to assist shouldering. Next, two, solid feeling, alloy, 12-shot magazines (previously plastic on the original Vulcan), a fi ll probe attached to a threaded dive-bottle adapter via microbore hose and semi comprehensive instructions too. I say this; as there’s nothing about fi lling the magazines, but that didn’t take long to get right, sussing the few quirks along the way.

Being a loaner rifl e, I didn’t want to use a spanner to tighten the fi ll-adapter on my air tank and there are no spanner-friendly surfaces to tighten with, but I was able to fi ll to 250BAR easily enough.

With a chunky Discovery HD34 3-18x50 FFP scope fi tted to the 17cm Picatinny rail, everything felt very positive there. The offset line of sight to bore was 72mm, which is fairly standard in my experience for Bullpups. Despite fi rst impressions suggesting that the gun slip wouldn’t have room for a kitted-out rifl e, it easily took the resulting combo. There was room to spare too, should you want to tote the rifl e with a bipod attached. With the HD34 mounted, all up weight was 10lb, so for dedicated pest control work I’d mount the lighter PARD008LRF day and night scope, to save half a pound and make this a true 24/7 machine.

This 8lb rifl e may be nicely compact at 30” overall, but it houses a full-length (19.7”cm) CZ barrel. A renowned manufacturer whose reputation offers reassuring kudos towards the accuracy department. The tube’s embedded within the action, then shrouded to 32.2mm diameter for the last 12” of that, slightly fatter than the original Vulcan. It proved reassuringly quiet on the range, so I’m confi dent it would be an excellent pest control tool, as well as a capable bench rest rifl e.

That chunky reservoir is slightly larger than the original Vulcan’s of 268cm, although the overall length is shorter, increasing the rifl e’s portability. Although I prefer the fl atter-shooting .177” calibre over .22” (in non-FAC form anyway), the latter are more air-effi cient with PCP actions. This regulated rifl e is listed to give 210-shots per (250BAR-110BAR) fi ll in .22” and 180 shots in .177”. A generous supply in anyone’s books and after-all nobody can carry that many rabbits! The almost as chunky barrel shroud has a removable end cap, (threaded M14 x 1.25mm) allowing addition of extra moderation if required, although I can’t see this being required, except of course for FAC versions.

Speaking of FAC, that chunky reservoir led me to enquire about air-hungry, high power variants. Chris from Regael said it’s also available in .25” and .30”, FAC versions are available as follows:

My dream compact FAC rifl e is currently the FX Dreamline Bottle-Pup, but that still has a basic/skinny Wildcat-style pistol grip. With its more comfortable handle, this rifl e is challenging that; so, the even more compact and lighter AGT Uragan might take the lead. The Vulcan 2 feels superb in the shoulder and cheek and the ambidextrous pistol grip feels wonderfully chunky; very nice indeed!

The rifle’s safety is just in front of the trigger, it slides back for SAFE and reverse for FIRE. Being manual, you can fl ick it ON and OFF as you wish; much better than an auto system. Plus, it’s near silent and smooth in operation, always a boost for we hunters. It doesn’t indicate the rifle’s cocked status, but at least it can be safely de-cocked, albeit leaving a pellet in the barrel. Frustratingly, there’s no anti double-load mechanism, although at least the side-lever cannot be returned to battery once the mag’s empty.

The alloy magazines feel solid and well made, with the backs of the pellets partly exposed once loaded. To load; rotate the central drum anti-clockwise against spring tension, while holding the mag upright and leaning slightly to the left, so the pellets are retained and don’t fall straight through the front port. If you release the drum at any point, it stops against the last pellet loaded. Insert by opening the action and leaving it to the rear, then slot it in from the left, where it’s retained with a gentle click by a sprung, brass, detent ball. It can only be inserted one way, thanks to a recessed keyway.

The cocking effort is a gentle 6 lbs, rising to 9 lbs for the last few mm of travel, at which point the cocking lever stands at 90o to the action block. There was one temporary jam at the range during testing, perhaps caused by the fi rst pellet protruding slightly; a plastic coated .177” cleaning rod, gently inserted from the muzzle quickly cleared it. Get in the habit of pressing the tip of the fi rst pellet in the front of the mag, just before you insert it to avoid this.

That chunky air reservoir isn’t just for show. Together with the regulated action, it produced 16 mag’s-worth of shots between 245 and 110BAR! (maximum fi ll pressure is 250BAR). That 192-shot count is almost buddy-bottle capacity, so hopefully enough to last anyone during one session. It’s set up to 11ftlbs (558fps) before leaving the shop, with single-fi gure consistency for most of the testing between 550-559fps. This dropping temporarily to an average 545FPS between shots #49-#96 (mags #5 to #8), perhaps due to my impatience cycling the action rapidly while chronographing. Incidentally, the maximum legal velocity with these 15.89-grain JSB Exacts is 583fps, so nobody should concern themselves with that blip. Having the manometer in the forend isn’t my preferred location, but at least it’s large face is fi nely graduated, promoting confi dence when checking the reserves.

I zeroed fi rst at 10m then 25, using less than one mag, aware this calibre’s trajectory isn’t as fl at as the .177” I’m more accustomed to. It was sadly too windy to extend the range shooting outside, but one furry hole at 25m regardless of who was behind the trigger, is testament to excellent accuracy potential. Speaking of trigger, there’s an excellent 2-stage unit, with a sweet pull of exactly 14oz and a very crisp release.

The underside of the forend includes a recessed Anschutz-type accessory rail. To this, I’d added a Harris #6a sling/bipod stud, to neatly avoid drilling the stock’s smart woodwork. Also available to fi t more extras is a 55mm length of Picatinny rail, which slots in and is tightened via two Allen bolts. With no hands free to sling a rifl e conventionally when roaming permissions, I’m 100% dependent upon ‘wearing’ my rifl es slung from my neck. The addition of a rear sling swivel stud will tick that box nicely. I’d also order a twin laser muzzle mount, designed by yours truly for close range ratting, these can be purchased from Stuart Waudby of smwengineering.co.uk to suit any shroud or moderator diameter, 32.2mm in this case. At £13 plus a pair of Picatinny lasers for £8 each from Amazon, this handy rifl e will be very capable from point-blank range out to at least 40m, conditions-permitting.

A superb rifl e, which might have nudged AGT ahead in my ‘dream FAC-rated, compact pest control wish-list. Thanks to Lloyd/Sean at BAR for the kind loan of the Vulcan 2, plus Chris at Regael (AGT rifl es UK Importer) for answering my questions. Thanks also to Bill, Bri, Scott, Emma and Colin for opinions and Bri for the photos at GARC’s indoor 25m range. I’ll hopefully have the even more compact/portable AGT Uragan to test and compare soon. Wish me luck and enjoy your shooting.