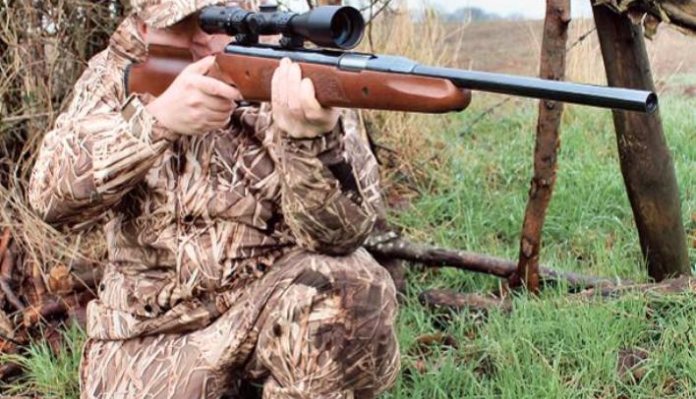 UK airgun manufacturers Air Arms has a long reputation of producing award-winning air rifles and the unique underlever action Pro-Sport being no exception. Its very stylish design is often termed as having the appearance of a ‘centrefire stalking’ rifle. That’s hard to argue with and although its sleek lines are undeniable it’s quite a chunky chappy, but even so, this man-sized sporter isn’t overly heavy. There’s also no denying its user-friendly handling characteristics are largely due to the very well thought out stock design, so where better to start the tour than from here.

The rifle tested is in beech furniture but a walnut option is available having the same profile, dimensions and features. The main sections that stand-out at first glance are its high, righthand rollover cheekpiece, thick ventilated rubber butt-pad and of course a sleek, full forend with a stylish ‘fluted’ tip. Upon handling the rifle, it shows its true colours, especially just how well proportioned and designed that right hand (left-hand available) roll over cheekpiece actually is. The reason I highlight the design is that although angled upwards and to the rear along the top – at the side it’s curved in such a way that it allows the user to mount a low-profile, compact optic or even large objective lens model (requiring high mounts) and still give correct eye-scope alignment, while offering a comfortable head position. This is particularly noticeable when looking from the rear, where the cheekpiece can be clearly seen to sweep over from the shooter’s perspective in quite a long ‘smooth curve’ until it reaches the top high-angled back peak. The drop down pistol grip has a rosewood end cap and white wood spacer, while the slim neck at this section is quite narrow in comparison to the rest of the stock, making for a very comfortable hold. The forend is quite substantial, relatively lengthy with a smooth profile and does a fine job of holding that ‘flush fitting’ under-lever. For grip, a generous amount of high definition laser cut ‘skip line’ chequering is applied on the pistol grip and forend – decorative floral cut borders cosmetically compliment the overall look of these grip aids.

We’ve become spoiled by the modern high-tech ease of a PCP, especially a multi-shot. Once a magazine is in place, you cycle a bolt or sidelever action and that’s pretty much the mechanics of the matter. Now, a spring gun is a completely different animal altogether. You have linkages, pins, catches, sliding unavoidable metal-tometal contact – there’s a lot of mechanical shenanigans, even for just the cocking stroke. So what have Air Arms done to ease the burden? Simple, they’ve re-jigged and modified the linkage lever from underlever to piston head, so that the cocking stroke is not as strenuous. There’s a lot more to it than that but just look at the detail picture of the linkage arm and you can clearly see how well engineered it is; then again, this goes for all components of the rifle.

To operate the under-lever, you first need to put your forefinger into a gap in the front underside of the forend at the very front of the underlever, so that you can release the alloy lever from where it sits neatly in a full-length recess in the underside of the stock. The lever flicks down approximately three-inches, so you can now get a solid grip on it to draw it down and back to fully cock the rifle, which has quite a lengthy travel. Upon engaging with the sears, this operation also automatically sets the trigger safety and anti-beartrap mechanism.

The Pro-Sport’s piston runs on a set of synthetic bearings positioned at the front and rear, whilst another set are installed on what is known as the compression slide. This results in a very smooth cocking and firing cycle but it still takes a bit of ‘heft’ to cock, needing that final tug at the end of the cocking stroke to engage the trigger sear and safety mechanisms previously mentioned. The sliding breech will also now have slid back, exposing the very roomy loading bay, upon which you can also see that the underside of the stock at this point has a generously sized cut away slot, so that a dropped pellet will fall through the woodwork to the ground and not into an inaccessible area, to potentially cause a problem.

The trigger on any full power spring gun is a high stress component, yet still needs to operate smoothly and release shots cleanly and consistently, time after time. As many other airgun writers have said many times in the past, the CD (Computer Designed) trigger unit is definitely one of, if not the best found on any spring-powered air rifle currently in production.

The 2-stage adjustable unit has a well curved, setback gold-plated trigger blade and combined with the grip position and slim neck design, a high level of shot release is soon and easily achieved. The automatic safety button as mentioned previously pops out to the left of the action when the rifle is cocked and is ideally positioned just above and to the left and rear of the cylinder and can easily be disengaged by the side of the thumb of your shooting hand.

The Pro-Sport has lengthy dovetails along the top of the cylinder, with three arrestor stud holes, but they shouldn’t be needed as recoil is minimal due to the smooth firing cycle and much of the mechanical action of the piston hitting the front of the compression cylinder is deadened by the weight of the rifle.

I scoped up with an MTC 3 - 12 x 44 Mamba Lite, and, as mentioned previously, the design of the cheekpiece allowing for such a low-profile optic to be used for those who like to mount scopes as low to the barrel bore as possible. Pushing the tape to 41.25-inches and weighing in at 9.5lb un-scoped, the rifle feels heavier than it is but balances perfectly on aim.

This more than proved itself in accuracy, as in the .177 calibre here on test I was producing ragged ¼-inch groups at a 30-yards set zero. Also, muzzle report is surprisingly low due to the full-length steel barrel shroud that conceals the 9.5-inches long Lothar Walther barrel internally holding baffles and expansion chambers.

Although the Air Arms Pro Sport has been around for quite a while now, and even though many other under-lever action rifles have come along and some gone since its launch, it’s definitely not showing its age. Undoubtedly the unique styling, very high-quality of engineering and superb overall performance have resulted in it attaining ‘classic status’ and in my opinion it’s a springer that will always be at the head of the pack.

Thanks to T & J. J McAvoy Ltd. for supplying rifle on test