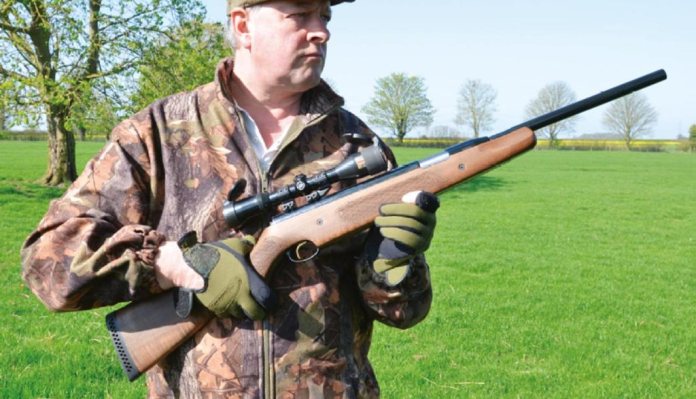 New models come and go, some are quietly dropped, yet others possess that magic ingredient, that marks them out as a ‘classic’- earning a permanent place in the product catalogue. We’re talking ‘enduring appeal’ here, and the Pro Sport from Sussex-based Air Arms, has it in spades!

Based on the specialised TX200 internals, more of which in a moment, the Pro Sport offers a fixed barrel configuration, recessed under-lever, gold plated 2-stage trigger and shrouded barrel. Adding to this, is a chequered factory walnut stock (beech is available), automatic safety catch, built in silencer, and an internal safety system around the cocking mechanism.

That’s a quick listing of the on-board features, but of course, what really sets the Pro Sport apart, is that delicious profile. For unlike the TX200, where the lever is up front, the Pro Sport sees it set further back and completely recessed underneath the forend. The lever is deliberately left ‘in the white’ so to speak (bare aluminium), and this contrasts nicely with the deep, rich chemical bluing of the action. Add in that oversized shrouded bull barrel, and the stylish sporter stock, and we have a super slick looker, with possibly the cleanest lines of any airgun currently available. I have often likened this model to a properly made Airsporter, and that’s praise indeed, given the sublimely graceful lines of that classic old BSA.

Build quality overall is indeed top class, with finely engineered CNC components, socket heads throughout, and a level of finish to rival anything on the market.

Industry favourite, Minelli, manufacture the stock in Italy, and the precision of the operation is excellent. However, I must say the quality of the walnut sporter on test was fairly bland compared to many examples I’ve seen, and the chequering seemed a little shallow. Wood to metal fit however, is faultless.

In the aim though, the combination of that extended forend, fluted tip, and prominent cheek piece, all play a part in perfect shot placement and ultimate control. The grip is quite large, but I have large hands, so all felt fine. As for the rosewood cap and thick rubber butt pad, they look the part and do their job perfectly. The stock is right hand dedicated incidentally, and for the record, Air Arms famously are one of the few manufacturers that will cater for lefties.

Moving to the action, Air Arms shroud the barrel on the Pro Sport, and the last few inches at the front are a small expansion chamber, so what small muzzle report there is minimised! But there is so much more to this model than meets the eye. Top airgun designer, Ken Turner was famously drafted in to devise a spring-powered action that could operate with minimal friction, and stress, and effectively offer a ‘factory- tuned’ feel straight from the box. The result was an ingenious system, whereby the compression chamber and piston are fully supported on synthetic bearings. This, in conjunction with a balanced mainspring and spring guide, eliminates metal to metal contact, and of course makes for a far smoother cocking stroke and firing cycle.

Shoulder the Pro-Sport, and it feels every inch the pedigree piece of machinery that it is. I’ve always loved a matt Walnut stock, and the understated subtlety still has enormous appeal. But of course, it’s the technical ingenuity, coupled with engineering integrity, that really impresses here. Just flip out that perfectly recessed under-lever, and it flicks into position. Now, with the butt firmly supported in the groin, the lever can be cocked all the way, until that satisfying crunch is heard at the end of the stroke. This signifies that the safety button at the rear left of the cylinder, has engaged and popped out. Now, whilst keeping a safe grip on the lever, a pellet can be pushed home into the barrel; and at this point, it’s worth highlighting a clever feature. Of course, being able to load directly into the lip of the rifling is ideal, as we can sense if a pellet is too tight or too slack. But the Pro-Sport also features a machined out slot in the bottom of the breech area. Fumble a pellet, and it just drops away, out of harm’s way, instead of jamming up the mechanics.

On the negative side, fail to cock the lever hard enough, and the mechanism is still set, but the safety catch doesn’t engage. If this happens, the lever will not return all the way- which is irritating. So, the moral is of course to be bold with the cocking stroke and ensure it goes all the way, every time.

Because of an internal safety system built in, around the cocking mechanism, the Pro Sport can dispense with that slightly annoying Safe-Lok bar, required on Air Arms TX200 series. Cocking effort is significant with the Pro Sport, and the fact that that lever is mounted lower, makes for a slightly more awkward stroke, than when using an HW77/ 97K or TX200 models for example, where more leverage is afforded coming down from the front. That said, technique makes a difference, so mount the support hand higher on the action, get into a regime with this model and it all falls into place. Flipping out that under-lever (there’s no catch) and allowing it to spring up under its own steam at the end of the stroke, never fails to bring a smile. Over-centre engineering is apparently the term, and until you encounter a Pro Sport, and play with that lever, it’s perhaps difficult to appreciate the subtlety involved. Maybe I should get out more!

The CD (Computer Designed) trigger unit fitted to these rifles is another great feature; and easily a rival for Weihrauch’s famous Rekord design. Making it gold plated adds a real touch of class too and it looks great into the bargain. Fully adjustable and capable of surprisingly light settings, I was getting ready to play with an Allen key or two, only to find the factory had set it perfectly and ready to trip with the slightest coaxing. Fire the Pro Sport and the slick, super smooth, and significantly muted feel of the action, is simply stunning- with all the ingenuity of the internal set-up instantly laid bare. Quite simply, this is one of the mildest mannered spring-powered airguns I have ever shot, and that even includes those Airmasters Mastersport specials of the ‘80s. Praise for sure; but shoot one, and you’ll get the idea!

And so, to performance figures. Interestingly, I did find that this specimen benefited from a quick warm up. Ten shots into the session over the chrono, and the velocity had climbed by 20 fps and then completely stabilised; so, subsequent 10-shot strings were recorded from that point. Most readings were very similar, but pellets were used straight from the tin. Air Arms’ own Diabolo Fields, made by JSB, weighing 8.44-grain, gave just 12 fps total spread, whilst this dropped to just 7fps using JSB Exact RS Diabolos (7.33grain). Accuracy with AA Diabolos was as expected, excellent, with sub 3/8” centre to centre groups over 25yards the norm, when shot from my FT over arm padded sitting position.

In short then, the Pro Sport is a mini masterpiece, and a perfect example of just how far a spring-powered airgun can be pushed and one indeed for the connoisseurs! Before I sign off, here’s a sad tale, that’s a lesson to us all. I used to see Ken Turner, the airgun ‘designer genius’ behind much that you see before you here, on a regular basis around the country, at Field Target events, back in the day. Shortly after the launch of the Pro-Sport, he agreed to hand fettle a fine specimen for me, hand picking the slab of exhibition grade walnut, checking over the action, even fitting a custom made straight blade match trigger, just to my liking. This work of art was subsequently collected, and probably within the year, my temperamental mind had decided that there wasn’t enough weight at the front, and it was sold on. Selling on any super accurate airgun is foolhardy in the extreme, but this was criminal. Dear oh dear; sorry Ken I’ve regretted my terrible mistake ever since! But somewhere out there is an enthusiast with an immovable grin on his face and I hope he’s treating my ex with love!