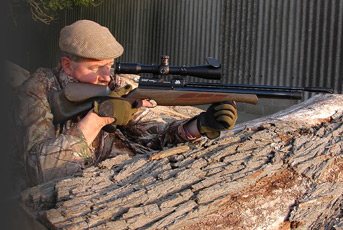 I’m a lucky chap. As a serious airgun enthusiast, getting the opportunity to handle and test a variety of the latest kit is always a pleasure. I get the full range: from basic plinkers to the very best pellet launching machines on the planet, and they clearly all have their place.

My fascination though, has always really lain with outdoor competitions, and to this end, the pursuit of ultimate accuracy has been the governing factor. Many rifles don’t make the grade in this demanding arena; just falling a little short where it matters, but the company behind my test rifle here, regularly feature when the silverware is being handed out.

Sussex based Air Arms, have a flagship model for this task of course, in the rather attractive shape of the EV2, yet since its inception, the upstart that is their s400 model, just keeps punching well above its weight.

The 400 series in general has been hugely successful for Air Arms, and despite being designed primarily as a hunting rifle, it has become a firm favourite with shooters across the board. With three times World Field Target Champion, Nick Jenkinson, on the original design team, the 400 was always likely to be an impressive piece of kit, but as the blueprint has slowly evolved with some clever tweaks here and there, this compact little PCP continues to charm.

The S400 spec then is fairly conventional, being a barrel over cylinder pre-charged design. Where it scores is with the use of high grade components. A subtle satin finish bolt has stood the test of time, along with an integral pressure gauge to keep the shooter informed of all-important residual pressure. The Lothar Walther barrel is held within a soft ‘o’ ring and a figure of 8 clamp at the muzzle, and whilst I would favour a thicker, more rigid, totally floating barrel, the system undeniably works.

My test model is the very latest incarnation- the S400F Classic Superlite, where ‘Classic’ denotes the standard length action. As usual, a carbine version is available, but shot count will correspondingly fall with the shorter air cylinder.

The ‘F’ spec includes all the latest largely cosmetic upgrades, but trigger tweaks are here too; all helping to improve an already great design.

What really grabs the eye with these new variations though, is the new woodwork fashioned unusually from poplar. Whilst I was initially thoroughly confused by the listed rifle weights (it doesn’t take much!) it transpires that the SuperLite spec manages to trim the weight of the woodwork by 25 percent (not the whole rifle). The end result means the new poplar variants tip the scales at 6lbs against the beech model, weighing 6.6lbs.

The rifle supplied came dressed in the rather smart Hunter Green livery, although two other options are available - Traditional (lacquered over grain), and Deluxe High Gloss, which is much darker. By scalloping all unnecessary wood away from the butt, these fully ambidextrous stocks become lean, yet still offer a good degree of support and function where it matters. Of course an ambidextrous grip is unlikely to match a dedicated wrap around spec, yet this SuperLite still feels reassuring in the aim.

Aesthetics do matter, and these stocks certainly look the part, where the laser-cut chequering contrasts nicely with the rest of the finish. These stocks, in keeping with the bulk of their listed products, are made for Air Arms by Minelli in Italy, and the standard of finish is extremely good. The final touch comes with the inclusion of the Air Arms logo on the grip and a rosewood pistol grip cap.

Moving to the action, this new S400F sports several cosmetic improvements, and the looks of this all time favourite are genuinely enhanced with the addition of fluting in several areas. Firstly the screw fit valve cover is now the same as that used on the company’s flagship EV2, and with matching flutes on the new muzzle finisher, the overall impression is sleek and purposeful. That muzzle fitting incidentally, now sports a slightly enclosed tip; yet it could hardly be considered a silencer by virtue of its size. It does seem to slightly mute the muzzle report however, which can only be a good thing. Further changes are definition applied to the front ‘8’ clamp, and the addition of a small fluted barrel link from the breech end.

The trigger fitted to the s400 series has always been a genuine 2-stage design, whereby the sears actually begin to move slightly apart as the first stage is taken up. An improvement was implemented at the factory a while back, with the addition of a third sear; yet criticism was levelled from certain quarters with regards to the fact that the trigger blade would remain floppy until the unit was cocked. I’ve shot 400’s for the last eight years, and never expended an ounce of energy mulling that one over, yet given the bleatings of certain parties, and Air Arms’ willingness to please their ever expanding fan base, the remedy has arrived.

A return spring now sits just behind the blade itself, keeping tension on the trigger, even when not in use. The spring is visible mind you, and I have to say, looks a little …er …like an afterthought…which of course, is exactly what it is. Does it detract from an otherwise excellent rifle, or matter a jot? I should say not.

These triggers also sport a safety catch button actually in the trigger blade, which isn’t dangerous; yet probably not ideal. In fact this is the only criticism I have of these rifles.

Many of us are familiar with these rifles, yet let’s just confirm what the average punter can look forward to with S400 mechanics.

That means firstly getting some air onboard; which given the superbly safe ‘T’ bar valve, utilized by Air Arms for their rifles, is a relatively stress free operation. All these guns are supplied with the female adaptor which just needs to be fitted to the the air supply system, be that a diver’s bottle or dedicated hand pump.

With companies such as Best Fittings now producing neat little kits to simplify the process of charging different makes of rifle, PCP ownership has never been more hassle free either. The principle of the Air Arms design is simple - the small slot cut in the adaptor, pushes over the ‘T’ bar on the rifle, and once turned is totally locked in place. Given the concerns when using high pressure air, having safe procedures such as this to follow just smoothes the path.

The S400F’s mechanism is unregulated, which means the velocity can vary dependent upon the initial fill pressure. From the factory recommended 190bar charge, I began the arduous task of checking the cycle over a chronograph. This stage may seem a terrible waste of good pellets, yet for peace of mind, and a full picture as to the performance of your particular gun, properly evaluating the output, in tandem with an electronic power monitoring device, has to make sense, highlighting the power curve and optimum fill pressure, just for starters.

In the case of my SuperLite test rifle, that 190bar fill, returned 125 shots with a total spread of 49fps, which is quite a wide fluctuation admittedly. Fill to a more sensible 170bar, and the spread has already closed to 33fps over 105shots. However, unless a huge shot count has become a mild obsession, fill this particular rifle to a mere 150bar, and 70 shots come in within a total spread of 25fps, which is perfectly acceptable.

For close range work and informal use, fill pressure isn’t so important; yet once finely balanced performance is required, that’s where knowing the optimum pressure begins to pay dividends.

I’ve shot enough s400’s to know just what they are capable of, but for the record, this Superlite posted quarter inch groups (ctc) at 35yds with Air Arms Diabolo Field, and 3/8inch clusters with Falcon Accuracy Plus. Groups were shot from a rest, but the raw potential is undeniable.

The s400 in all its guises continues to be a top class, ultra compact PCP, offering devastating accuracy, and adequate consistency- straight from the box. I take competition seriously, and still use two s400’s in national competitions, when I could use any rifle I choose to be fair. The British Bench Rest airgun team use 400 actions, and the list of general Hunter Field Target (HFT) titles that have been won with these guns continues to grow.

The ‘Lite’ treatment just gives Air Arms yet another tool in their ever expanding armoury.  The company never rushes to introduce brand new models; preferring to upgrade, and subtly improve upon their existing, proven hardware. In the case of the 400 series, who can blame them?

All things considered then, this S400F Classic SuperLite has to be a top contender for an ultra compact sporting gun, where serious performance matters, whether hunting or competing in target sports.