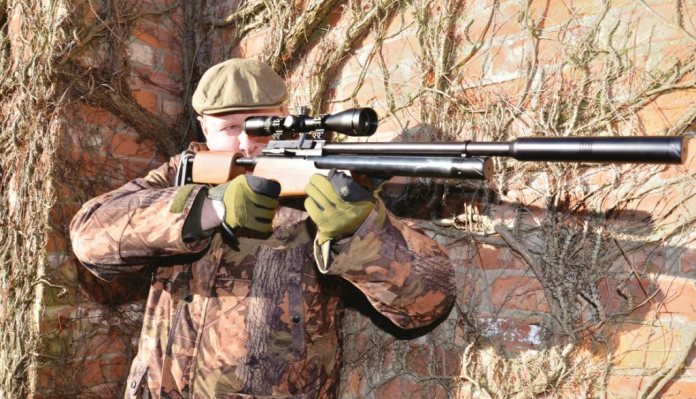 For those unfamiliar with the term ‘take-down rifle’ (TDR), it refers to a gun which can be dismantled quickly into just a few constituent parts, (or assemblies) and then stowed away into a compact case. Several companies have tried their hand at this concept over the years, but most have disappeared without trace, with their products being either overly complicated, or fairly Heath Robinson in their execution.

One notable exception is the S410 TDR from Air Arms, which was such a clever design from the outset, that it’s been a regular model in the company’s product line-up ever since. The original model was based around their award winning S410 bolt action, and all importantly, offered full functionality from that model, yet with take-down capability.

So, when Air Arms announced that they had carefully listened to customer feedback, and were introducing a new version of the TDR, based on the S510, there was understandable excitement in certain quarters, since it meant a sidelever version was imminent. On test here is that new model, and the first obvious change is the padded case in which the TDR comes packed. It’s significantly larger than the original, yet open it up, and it soon becomes obvious that the action can be packed with the silencer in place, rather than keep having to remove it after each session, as with the old. Areas are pre-cut into the thick padding, so that the two main sections of the action are held securely and can’t move around in transit. There’s also a gap relieved for the scope, so the rifle scope combo can all stay assembled, maintaining zero.

Specification wise, the S510 TDR comes complete with two x 10-shot cassette magazines, filling adaptor, Q-Tec Silencer, and a threaded shroud end, if you don’t wish to use the silencer. The action is based around the S510 side-lever multi-shot model, so that means a better cocking handle movement and position, 2-stage trigger, and a two-part walnut stock with accessory rail.

With the Q- Tec Silencer screwed in place at the muzzle, the new TDR is effectively just two sections, and to join them just requires the three small rods on the rear stock section to be located into the receiving holes within the main action assembly. Hold the two sections together, whilst gently twisting the small aluminium wheel at the top of the butt pad clockwise. Once the threads bite, you’ll see the gap between the sections slowly close. Just keep tightening, until all is snugly joined. In practise, due to the precision of the design, it works perfectly, and takes no time at all. The clever bit is that, once assembled, the S510 TDR operates just like it’s full sized stable mate, with no compromise in performance.

Consider some of the overly utilitarian contenders in this sector of the market over the years, and the S510 TDR looks positively luxurious. The stock, as standard, is in two pieces, with a short forend completed at the rear by a drop-down pistol grip. It’s an ambidextrous configuration throughout, with stippling applied to the grip, and a top thumb/ finger groove for added comfort. Everything feels good, but I would still extend that forend by a few inches, just to accommodate the longer reach. The extra weight would be minimal, and that recessed accessory rail under the forend, a handy feature if you want to connect a lamp or laser device of some sort, would just sit further forward. The rear wood work is a simple cheek piece section that affixes to the butt tube and works well. Pleasingly, Air Arms now offer the option of a black soft touch in place of the standard walnut, all at no extra cost.

Charging the cylinder is easy with the TDR. Just unscrew the stylish valve cover at the front of the action to expose the valve. Push the airline from the charging gear onto the ‘T’ bar and twist to lock. This is still the safest design on the market, since the airline simply cannot disconnect during the process. Air Arms fit an in-line 20micron air filter to the valve too, so excess dirt and foreign bodies (the bane of any PCP) should be kept at bay. They still recommend a fill pressure of 190bar with this model, yet whilst this will obviously give the greatest shot count, in my experience, a slightly lower fill pressure will maximise consistency. Some trial and error in conjunction with a chronograph, is the key, and my range report highlights the figures recorded.

As mentioned, this S510TDR comes supplied with two x 10 shot magazines, and the beauty of their own design is that the central drum is free moving in either direction at any point, and a clear lid means you can easily see what chambers are empty. Refreshingly simple, and in practise, extremely reliable. Just drop a pellet head first into each chamber, pull back that perfectly weighted side-lever, push the magazine into the slot within the breech block until it locates against the side plate, and then close the side lever. The first shot is now ready, and subsequent cycling of the lever will index each pellet in turn.’

Muzzle report is significantly muted with this model, due to a combination of the shrouded barrel, and the Q-Tec Silencer. An all-in weight of just over 6 lbs un-scoped, means the TDR can be carried when out hunting, over an extended period, without being too much of a handful, which of course stacks up more plus points.

I must admit to being initially disappointed that the new case was so much larger than the old version, just conceding a little on the ‘compact’ ticket; but the fact that the silencer can now be left in situ when the action is taken apart, is a huge improvement. And for those occasions when we wish to keep a low profile as to our activities, it’s still miles shorter than a conventional rifle case, at 35.25” in length, so less obvious all round.
A TDR with the new side-lever just feels great, and the subtle weighting, and minimal effort to index the magazine, and cock the hammer for each shot, just brings confidence in the pedigree that sits behind the brand. The 2-stage trigger fitted to this model is the same unit from the S400/500 range, and as such is respectable. It’s not full match spec, but with some careful adjustment, it can be made reasonably light, and trips predictably.

Apparently, the cylinder size for this model is the same as the S400 Carbine, which itself is larger than the original TDR’s specified air reservoir, but the standard size it then adopted, shortly after production began. Shot count wise, I was intrigued, as Air Arms still specify this new S510 variant as 40 plus; but my chronograph readings went way past that!

So here goes; from the factory-specified 190bar, I recorded 100-shots overall, and stopped with 100bar residual pressure left in the cylinder. Initial velocities were admittedly low (around 720 fps), but from 160bar onwards, my chrono showed 67-shots within 24 fps, and average energy around 11.1 ft/ lbs. Great figures from such a compact rifle, but evidence that careful charging, probably to a lower pressure than specified, is required from this type of unregulated gun. As for the shot count, Air Arms are conservative with their figures to say the least!

In terms of accuracy, this brand is normally known for their above average returns, and moving straight to 35 yards, after an initial zero session, resulted in some seriously small groups, arrived at with modest input on my part. Just slightly larger than ¼” centre-to-centre were the norm, and that means live quarry are in serious trouble, when this model takes to the field, which is its natural environment after all!

I’m honestly not on commission, but it’s difficult not to rave about Air Arms products, when they continue to be so thoroughly thought through, and as beautifully executed as the S510 TDR. The original TDR was a mini masterpiece, and with the new revisions and that super smooth side-lever, all incorporated into the design, this latest model should prove another popular seller. Yes, it’s still the ultimate Take-Down for sure!