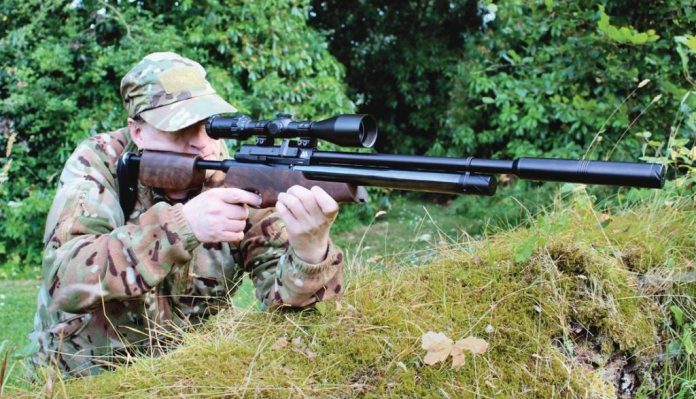 I’ve long had an Air Arms S410 TDR (Take-Down Rifle) in my armoury and it’s served me well for many years in a range of hunting scenarios and pest control duties. I mention this as the roster at the company has obviously grown with progression, in particular and of relevance here, is we now have the side-lever action, S510 family of PCP sporters. So, it follows that the company would and have, in more ways than one, made the model available in TDR format.

Note I used the term ‘in more ways than one’, well, that’s because the TDR is available with a non-regulated (as per rifle on test) or a regulated action. Plus, there’s also an XS version for certificate blessed shooters - rated at 20 ft/lbs in .177 and 25 ft/ lbs in .22 calibre. I’d wager it’s mainly our US cousins who’ll be the main patrons for that very niche gun, so time to get back to the here and now.

The S510 TDR comes in three separate sections. There’s the rear assembly that includes a cheek rest and butt pad, an action/mainframe/forend and finally, a secondary moderator. The latter refers to the company’s Q-Tec sound moddy that comes already screwed onto the muzzle. This is accommodated in the newly designed case the rifle is supplied with, which is now made from high-quality ABS with a thick foam lining.

Assembling the rifle is a very easy affair, as the front of the detachable butt section simply pushes into the rear of the action, behind the pistol grip. Three steel prongs locate into mating holes in the block. It’s secured in place by pushing in against spring tension, then turning the large knurled wheel that’s positioned just forward and at the top of the adjustable rubber butt pad.

When all put together, you can clearly see the high-grade walnut used for the stock. The forend is attached to the barrelled action, while the cheek rest is ‘isolated’ on the rear assembly, which (as previously mentioned), also holds the sliding, adjustable rubber butt pad. And the good news is, due to the very well thought out design, it doesn’t feel alien or awkward in the hold when assembled.

Starting at the rear, the tubular alloy butt section has an ambidextrous, chunky, medium-height cheekpiece that makes for a more than adequate headrest. Plus, before moving on, I must say that the adjustable butt pad is a very thoughtful inclusion, as it helps the shooter to achieve perfect head-eye-scope alignment.

Another neat feature is in the underside of the cheek rest. It shows a large recess, with two spring clips that are designed to retain and store spare magazines. Useful, even if you only use them for storing empty spare mags while the rifle is in the case.

The fore section of the stock has a steep, drop down, full stippled pistol grip, which offers a very solid hold for the shooting hand. The forend is short but quite deep in profile, though quickly tapers sharply upward to run parallel with the slim air reservoir. The forend also has an accessory rail integrated into its underside for fitting a bipod, laser or sling swivel stud.

Once the cover cap at the front of the air reservoir is unscrewed, it reveals the very safe and now familiar fill point that Air Arms uses for all of their PCPs. It is a chunky stainless-steel fill valve housing, with a ‘T’ bar-shaped securing point for the pushover fill adaptor to securely mate up with. The rifle takes a 190bar fill and is specified as giving approximately 55 shots in .177 calibre (on test) and 70 in .22. There’s also a neat but generously sized air gauge deeply recessed into the underside of the stock, so at a glance, you can check your air status.

Bit on the side

Without a doubt, the side-lever cocking mech has more than been accepted by the general shooting public. The ergonomic design as well as the ultrasmooth operation of the S510 TDR’s lever makes it one of the most efficient to use.

In the closed position, it sits very neatly and unobtrusively alongside the rear righthand side of the receiver. To release the 10-shot ‘un-sprung’ magazine or to cock the rifle, you hook your forefinger under the front of the sidelever, which has an inner outward curve for ease of access, and with very little effort, draw it back whereupon it locks fully rearward. To remove the magazine, you have to pull back a tad further, so the probe fully exits the magazine, then the mag can be manually slid out from the left-hand side of the action.

Loading the 10-shot, perspex fronted magazine is a simple affair. Simply rotate the inner alloy drum, dropping a pellet into each empty chamber as it arrives to be seen through the open access hole, which is located bottom right of the cover plate. When all chambers are filled, replace the magazine back into its housing in the action until it butts up to the angled stop block on the opposite side. Once the magazine is back in the housing, you can now return the lever to its original closed position.

This operation has now cocked the rifle and probed a pellet directly into the semi-free-floating, 16” Lothar Walther tube. A noteworthy feature is that the inner side of the cocking lever has a discshaped Delrin buffer, to prevent it from making any noise when you manually relocate it back alongside the action.

The 2-stage trigger is adjustable for first stage pull weight, sear engagement and second stage pull weight. It also has the now familiar, manual ‘thru-blade’ cross- bolt safety button, which is the norm on any modern Air Arms PCP sporter. Simply, push over from the right to engage it and back in from the left to put into live fire mode. The trigger unit is a very precise one and can easily be adjusted to suit all preferences.

The bull barrel shroud isn’t just cosmetic. It holds a primary silencer in the forward section. Air that would follow the pellet on firing is directed down, back inside the barrel shroud, to exit out through three vent holes positioned just forward of the raised action block. However, as the TDR comes with the company’s highly respected, Q-Tec (calibre specific) can already spun onto the screw cut muzzle, you’d be a fool not to take advantage of the very efficient sound suppression properties. The report on firing is reduced to a mere whisper.

I scoped up with an MTC 3-12x44 Mamba-Lite, which during testing proved a very nice pairing. The good news is that you don’t have to worry about your zero shifting, as when broken down and put back in the case, the scope can be left on the action. So, when reassembled you’re still on target.

As for accuracy, do you really need to ask? Just feed the rifle quality ammo and like its full-bodied close relative, it gives stunning results out to 40 yards. Specifically, shooting from a rested position it regularly returned ragged pellet sized groups out to my 30 yard set zero.

Now, although I haven’t as of yet tested a regulated TDR, I must mention that regulators don’t make an air rifle more accurate, they just make them more air efficient. So, I’d say the accuracy speaks for itself and as for shots per fill, I can’t say I was left wanting.

In my opinion, the Air Arms S510 TDR is a serious hunting tool and deserves to be treated as such. It should certainly be at the top of the list if you’re on the lookout for a take-down. If I had one ‘niggle’, it would be the button safety in the trigger blade. However, having said that you do quickly get mindful of how you use it and adapt to suit.

So, to sum up. When it’s all put together, you have a very lightweight, fast handling, versatile sporter that boasts one of the most efficient calibre specific cans currently available.