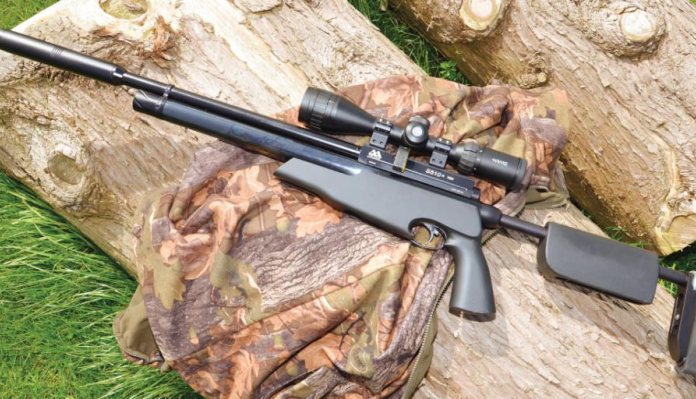 The concept of the AA Take Down Rifle (TDR) certainly makes sense; and, whilst there is undeniably a hint of ‘Day of the Jackal’ about the proceedings, it’s really all about practicality. Like it or not, keeping a low profile is sometimes in our favour, and a shorter box that doesn’t look so obviously like a gun profile, can be a big help.

Of course, you may just want something portable and compact. The latest, revised package from Air Arms now comes in its own dedicated hard case too, and this stretches to just over 36”. Somewhat longer than the original TDR, but we are now talking a quality design. As for those compact credentials, a quick check of most of my rifle cases, reveals a typical length of between 48-50”; so, it’s still bang on its remit, scaling down our kitbag in style.

I’ve been a fan of the TDR, ever since it was launched. For and unlike several rather lame examples from other manufacturers, which proved spindly and rather Heath Robinson in their execution, (and have mainly sunk without trace). Air Arms’ superior design offered the shooter little in the way of compromise from the start, and much in the way of comfort and handling and that’s no easy trick to pull off. On test here is the very latest S510 TDR ‘R’ Tactical, where the ‘R’ denotes a regulated action; so, it will be interesting to see how this compares with the standard version I tested a while back.

As mentioned, the compact hard case provided is quality and its similar to the latest models supplied by Daystate. OK; it does have those slightly irritating pressure locks (plays havoc with your nails darling!), but it’s a serious piece of solid protection! Open it up and the foam-lined interior is cut to hold the TDR in two main parts. These comprise of the main action – barrel, receiver, silencer and a scope in situ, and the rear/butt section, which has an interesting and legal role to play too.

Built around the S510 action, the TDR gets a full length barrel shroud, the latest Q-Tec silencer, side-lever action, two-stage trigger, pressure gauge, accessory rail, and two x 10-shot magazines. As for the two-part build, this Tactical R model gets the Black Soft Touch finish and, for the uninitiated, this type of stock has become rather trendy. It is basically a thin coating of rubber type substance, applied over hardwood, probably beech here. The end result is best described as cosy to the touch, and it feels superb. As for its durability in the field, I’m not so sure; but then this gun is a tool to be used, after all.

Build quality and finish are right up there, and everything we have come to expect from Air Arms. All the metalwork gets a smart black matt finish, save for the main cylinder, added detail could be applied. However, my main gripe concerns the forend and, as I’ve highlighted on previous occasions, I still find my forward reach can easily end up touching the cylinder. Extending this component by a couple of inches would add minimal weight and nothing to the overall length, but certainly improve handling. Moan over!

So, back to the positives, of which there are many. Cycling the side-lever action is slick, requiring little effort and, on test, the magazine function was precise and faultless. The trigger is the tried and tested unit from the old S400 series, so this is a known quantity, and a properly functioning 2-stage design, (sear engagement) that can be adjusted to trip reasonably lightly. However, the safety remains the same in-blade cross bolt design, which not everyone likes. Regardless, the basic foundations of the TDR R are in place.

And so, to the regulated action. Regulators have become increasingly popular over the last few years and, whilst they are often seen as something that only competition shooters should be concerned about, ultimate consistency can be beneficial to all. Obviously, Air Arms have included regulated actions in their flagship FT models for many years, such as the all-conquering EV2 and its replacement, FTP900. But there are now several of their hunting models that sport these precision devices, embedded within the action, with the idea being that they finely meter the pulse of air for each shot.

In the case of the TDR, a hunting machine at the end of the day, maximising consistency and therefore in theory, performance, has to be advisable when we are talking about live quarry. Anything that can shave fps off the variation, should therefore pay dividends where it matters. So, what of the all-important performance figures?

As mentioned, this regulated action takes 250bar and, from that figure, over the chronograph, I recorded 95 shots with a total spread of 12 fps- excellent stuff. This, I might add, was using 16-grain Air Arms Diabolo Field pellets straight from the tin. I shot the TDR R down to a residual pressure of 90bar on the gauge, but that level of consistency in real world terms, compares favourably to anything similar. It also compares well to the last unregulated TDR I tested, in .177, that managed 67 shots within 24 fps).

12 fps is miniscule, and you will be hard pressed to detect any difference in impact, which is after all, what we’re after. And so, with the statistics on paper, it was time for a fi eld test, and after a session to familiarise myself, and get the feel of this TDR R, I settled into a serious session. Kneeling at 30 yards, when I did my bit, returned groups coverable by a 5p coin, no really, which is stunning on its own. But several rested groups over 35 yards, probably the optimum for a hunting rifl e to be fair, returned a couple of genuine, ¼” centre-to-centre clusters, using again Air Arms’ own branded Diabolo Field pellets. Superb groups by anyone’s standards, and testament to the integrity of the TDR R set-up.

So yes, I can’t pretend otherwise, I liked this rifle. I did state early on, that I was sold on the TDR concept years ago, and this latest incarnation has lost nothing of the allure. Indeed, with the subtleties of the S510 action, and now tweaked and regulated internals, Air Arms have well and truly revamped the TDR concept. I can’t think of any serious rivals that offer this particular combination of genuine take-down capability, coupled with a fully functioning civilised rifle in operation.