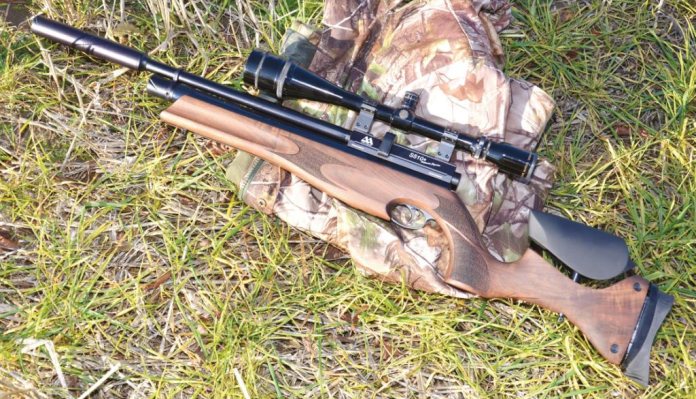 Trends come and go in the airgun industry, as in most other fields, and manufacturers need to respond to those to keep in touch with their target market. Most notably, the Bullpup bandwagon trundles on, and we now have a larger choice of such models, from just about every manufacturer, than there’s ever been. Clamour from across the pond has driven the likes of Air Arms to go down new paths, with exciting models and features that filter through to all. And that rolling development programme gave the company’s Galahad model, for example, a momentum that it may not otherwise have had.

But for now, forget all that, for the very latest buzz word is ‘regulator’. OK; the cynical among us may just view the fitting of a ‘reg’ to an existing model, as a way of allowing manufacturers to get more mileage out of an existing line-up, yet there is of course much more to it than that.

While many shooters are quite happy to keep things simple, and uncomplicated, with an undemanding outlook, many of us are keen to push the boundaries of performance and maximise consistency wherever possible.

The S510 Ultimate Sporter was well received from the outset, and as the name suggests, it’s a hunting rifle bursting with features, that elevate its performance and desirability way past most rivals. But with much of Air Arms’ production going to export, and that demanding US sector clamouring for a regulated version of the high power XS variant, the wheels were truly set in motion for the company to expand their offerings with factory regulators as standard.

An un-regulated PCP needs careful charging to a specific pressure level, otherwise the power/trajectory curve can be too marked. With a basic knock-open valve setup, as the main reservoir pressure decreases over the charge, the valve finds it easier to open, creating possible high velocities at the start, a mid-band, then progressively lower velocities, as residual pressure drops. Fit a regulator, which will carefully meter the output for each shot, separately from the main cylinder, and the level of consistency should be improved over the charge, but all importantly, the usable shot count should increase too.

The original Ultimate Sporter sported laminate woodwork, but this new regulated version can now be specified with three different stock options: Walnut, Laminate, or Black Soft Touch. Take a look at my test model, and you’ll notice that the Walnut version also comes fitted with that distinctive Black Soft Touch cheek piece, and I reckon that adds distinction, and really looks the part. The process sees a thin layer of rubber-type compound applied over wood, so everything feels solid. Of course, on a practical note, this finish may prove slightly irritating if it gets scratched in any way, but in use, it feels wonderfully cosy. As for the quality of the timber on this rifle, my test model displayed some truly beautiful grain patterns all over, culminating in those mouth-watering swirls and colours around the reverse of the butt. I’ve always loved walnut, and the quality, supplied by Italian stock maker Minelli, as usual, is extremely high. A matt oil finish, for me, trumps gloss any day, and this S510R looks particularly good in this spec.

Part of the attraction with this model, is the full-on adjustable elements of the stock, and it really does pay to spend some time with a few Allen keys, to get everything perfectly set up. The large bolt on the reverse side of the butt just needs to be slackened off, then the cheek section can be raised or lowered to suit, to get eye/scope alignment spot on. Slacken off and pull out the cheek on its pillar, and access can then be gained to the small screws on the underside. These allow for the cheek to be slid to either side on its axis, allowing for an offset position. Then set the height, and the sight picture should fall into place.

Do all this in conjunction with the fully adjustable butt pad assembly (via a screwdriver at the rear), and you should be amazed at the end result- a shooting position that fully supports the head, free from stress and over reaching in any way.

Being a multi-shot PCP, we first need to fill the 10 shot (irrespective of calibre) magazine, before the action can start. Filling is simple- just pull back the side-lever, cock the mechanism, and pull the magazine from its slot within the action. Drop a pellet head first into each chamber, as you manually rotate the inner drum. Now insert the full clip until it snaps flush against the side plate, close the side lever, and the first shot is indexed and ready.

Unusually for Air Arms, this regulated model needs to be charged to the higher pressure of 250bar, via their safe T-bar valve at the front. As always, charge relatively slowly, so as to get a full on-board pressure. Fill too quickly, and the air will rapidly heat up, and then settle eventually to a lower pressure than intended.

Given this model’s main selling point of the regulator, my first port of call was to be the chronograph, as I was eager to see how the new valve setup would behave under scrutiny. From that 250bar and using Air Arms’ own Diabolo Field 8.44-grain pellets in .22 calibre, I returned 115-shots within 13 fps, which is pretty superb, and it has to be said, with that level of consistency, you’d be hard pressed to notice any difference in trajectory down range. For the record, this compares favourably with the 70-shots recorded in my previous test of the standard model. I’m not sure at what pressure the regulator would be set to, but I stopped over the chrono when velocities were dropping off. At that point incidentally, the gauge on the gun showed a residual pressure of 80bar. At this point, it’s worth mentioning an interesting detail in that the gauge on this ‘R’ version does show residual main cylinder pressure, and not just the reg pressure, as is usually the case.

On test, I did encounter a problem with one of the magazines supplied, in that it intermittently failed to rotate when the lever had been cycled; notably during the faster cocking sequence when I was power testing over the chronograph. In its defence, this rifle had been out for other reviews admittedly, and in my experience of products from this premium brand, any malfunction is an extremely rare occurrence. Switching to the other mag restored perfect performance, but I was still surprised, at my apparent bad luck.
Accuracy with the AA brand is normally a given, and this S510R didn’t disappoint on that score, with ragged clusters printed over 30 yards, opening up to ½” over 40yardspretty damn good for a hunting machine! But, as with so many products from this manufacturer, it’s not so much the end performance that impresses, more, the way in which it gets there. Slick, effortless cocking courtesy of that neat side-lever, and a muted muzzle report, soaked up by the beefy Q-Tec can at the front, all set the right tone. But with the superb stock all set correctly, and the excellent 2-stage trigger doing its thing, there really is an upmarket feel to the proceedings with this model, that sets it apart from many notable rivals.

As stated at the start, many enthusiasts are in the KISS camp: keep it simple stupid, and there is undoubtedly more to go wrong with any regulated airgun. But if an added level of sophistication/consistency appeals, then this new S510R just has to make sense. Opting for the Black Soft Touch stock overall will trim £100 off the asking price too, which, having handled this stock, seems like a bargain to me. Whichever route you take, this new regulated pedigree is unlikely to disappoint.