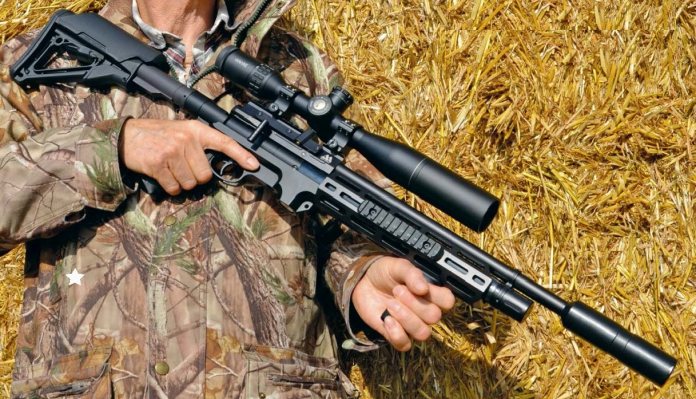 Detectable trends in the airgun market make for interesting reading over the last decade or so, with Bullpup style airguns, in particular, seeing an extraordinary rise in popularity. But in case you hadn’t noticed, there’s been another mini-revolution going on - that of the Tactical airgun. Whilst undoubtedly this area of the market well and truly indulges the fascination with military specification, a wealth of practical application and reasoning underpins this whole approach to design.

Up until now, companies such as Brocock and FX Airguns have largely had things their own way, exploiting the emerging trend and mopping up sales at the higher end. But with the Air Arms S510T Tactical model about to arrive at a gunshop near you, the stakes just got higher. What’s on test here is very similar to the final production gun, but as one of several prototype models prepared by the factory, it should be pointed out, firstly, there’s a few nicks and scuffs, picked up from the media circus that has surrounded this gun, ever since the idea was mooted. Secondly, subtle differences in the spec will emerge with the production gun. More on that later.

Built around the highly successful, award-winning pneumatic S510 action, the new Tactical is dubbed by Air Arms as the ’ perfect blend of usability and functionality’, and with a modular chassis-style stock, and a host of modern features incorporated, versatility is a recurring theme. Fans of this style of gun will appreciate the thinking behind the format, and it’s the level of adjustment and adaptability that holds such appeal for many.

The stock is formed from an aluminium chassis, incorporating the front ‘cage’ section, manufactured by Air Arms, complete with Picatinny accessory rail. Crucially, and in keeping with customer demand with this style of Tactical model, all mounting points are to international specifications, so those are M-LOK slots in the forend. The M-LOK system allows for all manner of accessories to be mounted at the tweak of a ‘T’ bolt. Bipod, torch, laser, or just snap in rubber inserts to enhance grip. The possibilities are huge, which explains the spiralling popularity of this type of tactical hardware.

This style of gun with ‘universal adaptability’ has necessitated buying in some parts from outside, and here, Air Arms was determined to source respected components, so as not to dilute their strong brand reputation. The composite drop-down pistol grip is made by an American company, Magpul Industries, and is AR compatible, as is the stock buffer tube (apparently sourced in the UK), so customers can source their own after-market components further down the line, further customizing fit, feel and appearance.

Look to the rear

OK, so gun fit is a big part of the equation here, and that entire rear Magpul assembly is designed to slide on the buffer tube. Just grip the spring-loaded tab inside the triangle of the butt to release the mechanism, then slide the unit along and set it at any one of five stages. Finally, press the large forward locking clip, and the butt is held snugly in position. In short, snap-fit adjustment that instantly tailors the length of pull to suit the user.

I’m beginning to get the point and lifting ideas from our military friends when ergonomics and practicality head up the remit, can’t be a bad thing. Rifle configurations can be changed in seconds, likewise handling positions.

So, we’ve established that this tactical special is built around the S510 action, and this one comes fully regulated. Look closely and you’ll notice that the side-lever here is now a drop-down biathlon style specification, which allows for even faster cycling. The receiver is dedicated to this model too, with an integral Picatinny rail as standard.

That oversized silencer certainly looks the tactical part, but it couldn’t be removed on my test model. I’m assured by the factory that production guns will feature much the same unit, but here, it will be removable for cleaning purposes. Elsewhere, the glossy chemical bluing of my test specimen (still technically a prototype remember) will be replaced with a far more practical, matt anodized finish, in keeping with the full project remit.

Charging the S510T brings us back to familiar ground, and that means the super-safe ‘T’bar arrangement. Just unscrew the smart dust cap and snap the adaptor/airline over the ‘T’, twist to lock, and gently charge to the specified 250bar fill pressure. There’s a manometer on the underside of the action too, so everything stays slick and efficient.

The magazine is the standard and refreshingly simple, 10-shot Air Arms cassette design. Just drop a pellet in each chamber, twist and keep filling. The trigger on this model is also familiar territory, and that means a genuine 2-stage action that responds to some judicious tweaking when necessary.

So, we’ve set everything up and it’s time to get hands-on. I love the textured rubber feel to the pistol grip, and the forward reach grip adds another dimension to handling. The lack of an adjustable butt pad does seem a bit remiss, but otherwise, it’s hard to fault the level of handling and feel on offer.

It’s normally a pleasure to test AA kit, to be honest, since the company has a propensity for producing guns that are, how can I put it, inherently accurate. High-class barrels so often separate the airgun market, and with Air Arms negotiating seriously good tubes from Lothar Walther, it’s no surprise they so often have the edge over several rivals. Zeroing the S510T proved a simple task and a target card set at 30 yards initially made sense, given this model’s likely hunting duties. Despite a lifetime of shooting sport, I still never tire of the satisfaction that comes from seeing a true enlarged single hole emerge up at the target, and that’s just what the Air Arms Diabolo Field’s produced here. Moving back to a whisker under 40 yards, and much the same result, with easy clusters, admittedly from a rest, of a little over a 1/4” c-t-c. I think the technical term is flipping accurate!

“Shoot it properly”, I hear you cry. Well, I did that too, and in a kneeling position and using the front grip, I had spinners on my practice range bouncing all over the show. Basically, this is one seriously capable gun, whatever you plan to throw at it.

Chronograph results were pretty textbook too, with the specified factory claim of 120 shots in .22 calibre panning out, virtually to the shot, with a total spread of 12 FPS. Take the first 70 shots on test, and the spread was just 7 FPS! The Series 7 Air Arms reg works then. It is possible to double cock the action it should be said, but this only occurred whilst speed cocking for the chrono report if I’m honest.

For the record, if you have the necessary paperwork, there’s a FAC version available, which will work out a tad heavier than the standard model, courtesy of the extended cylinder. Something else that crossed my mind, especially when I noticed how the butt connects to the chassis and not the action, is whether Air Arms will offer the Tactical chassis stock as a complete item, to retrofit, and a word with the factory confirmed that this is very likely further down the line. Given the simple, single fixing point, the retrofit should be possible with any S400 or S500 derivative action produced after 2010, so something to look out for.

As for the S510T, airguns in this sector, of the quality on offer here, don’t come cheap and whether the asking price seems reasonable, is entirely subjective, dependent upon the individual. One thing is for sure though - when a big hitter such as Air Arms enters a particular product area, you know it’s ‘game on’, and with the emergence of the S510T Tactical, the company now has a foothold in a growing sector of the market. As for us punters, we now have all the appeal of the military-inspired tactical blueprint, coupled with the classy performance that comes as standard, from one of the most respected brands in the business. A potent force indeed.

Thanks to Range & Country Shooting Supplies in Sleaford, Lincs, for the kind loan of this rifle for the test.