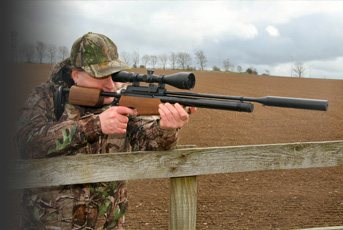 When ‘take-down’ rifles first appeared on the airgun scene, it’d be true to say they were seen by many as gimmicks or a ‘poacher’s tool’ and by and large weren’t taken seriously. These days more ‘quick strip’ designs are being offered; proving that they’ve been accepted and are now regarded as specialised rifles with a specific role in the big scheme of things.

When I first heard Air Arms had decided to produce a take-down/modular rifle based on their very popular S410 it immediately stirred my interest. Called the TDR (Take Down Rifle) it was originally only available in .22 calibre. So enamoured was I by it that I purchased one with the intention of eventually having it modified to .177 by John Sykes at Hydrographics, as at the time he had seen the potential for doing this modification.

Well, Air Arms have finally released a .177” version after ironing out the niggles the smaller calibre would ‘throw at them’ in this format. The main factor was that the shot count would be miniscule, so the reservoir would have to be longer to accommodate more air and of course the barrel lengthened accordingly. However, most other features remain the same and as some design features on standard S400/410 series have moved on these have been incorporated into the new TDR. These include the upgraded fill point and latest 2-stage trigger with manual safety. But first, let’s take a look at what’s in the bag.

The TDR comes in three separate sections; detachable stock, action/mainframe and silencer, all of which fit into a neat, black carry case courtesy of luggage and accessory specialists, Napier. In my opinion Napier knows what they are about, so well done Air Arms for entrusting the ‘bagging up’ of the rifle to them. Opening the zip flap reveals the egg shell foam lining that offers the rifle maximum protection. Two Velcro fastening straps keep the components in their purpose-shaped compartments. The bag has a carry handle and double shoulder harness so you can back pack it too. There’s also a single shoulder strap. The latter two systems are fully detachable.

Obviously the first job is to assemble the rifle. No hardship here, as the detachable butt section simply pushes into the rear of the action behind the pistol grip where three steel prongs locate into mating holes. It’s secured by pushing in against spring tension, then turning the large, knurled edge fixing screw positioned just forward of the adjustable sliding rubber butt pad.

Finally slip the silencer on and secure it with a finger screw. The rifle now measures 40.5”overall and 6.7lb un-scoped. That’s only two inches longer than the .22 calibre version and a measly 0.2lbs heavier. After assembly, it’s just a matter of fitting a scope as usual and zeroing in, but first a closer look at the stock arrangement.

Made of walnut, and as you’d expect of a take down design, the forend is separate and attached to the action/mainframe whilst the butt is simply an alloy tube with an ‘isolated’ cheek piece and full rubber sliding adjustable butt pad. Despite the butt sections rather marginal looks it does not feel awkward or unpleasant when mounted. The cheek piece is of a reasonable height and thickness that allows for a more than adequate headrest. What certainly helps with sighting and eye/scope alignment is the inclusion of the sliding adjustable butt pad. Under the cheek rest is a large recess with two spring clips that can be used to store spare magazines. A clever idea and one that will doubtless appeal to many hunters, if for nothing else than you know where the spare ammo is stashed even when it’s in the case.

Incidentally don’t go thinking you can use this as a high power pistol as the design will not function unless the butt is properly fitted. The forend has a steep, full wrap around pistol grip design with stippling offering a firm hold for the shooting hand. The design is short but deep in profile though tapers sharply upward to run parallel with the air reservoir. Though quite sparse it’s so designed that it affords a well-crafted chunk of wood for the leading hand to hold.

The forend also has an accessory rail in its underside for fitting a bipod, torch or even a laser. Air Arms also includes an air pressure gauge so you can keep an eye on the fill status too. The rifle is now filled like other new models in the range by the super safe, sintered bronze valve that ensures no dirt or grit enters the air reservoir. The rifle comes supplied with a brass, cap-shaped adaptor that pushes onto the fill point. Once attached to the hose of a divers’ bottle - or a manual pump - simply fill the air reservoir to the usual 190bar. Even in .177” the TDR is very air efficient now having a longer reservoir that will give approximately 60 full power shots. That figure should be noted as I remember the main comments of the original in .22 where that it had too low a shot-count.

No surprises the action scores very highly as the rifle is based on the S410 multi-shot so no problems with the 10-shot removable un-sprung magazine, solid ‘railed’ action block and ergonomic alloy bolt. Pull back the cocking lever, take out the magazine and drop in a pellet into each chamber as you manually index the inner drum around, then slip it back into the action and pushing in the cocking bolt has pellet ‘Numero Uno’ ready to go.

The TDR’s 2-stage trigger is the same up-graded version found on other new S400/500 series rifles. If you ever wondered what the milled slot in the underside of the guard was for, then wonder no more, as it allows access to the three grub screws that adjust the mechanism. These sort the first and second stage pull weights and sear engagement. It also has the manual, in-blade, cross bolt safety which is the norm on any new S400/500 series Air Arms sporter.

Solid as a Rock

For scoping up there’s the same amount of rail on the action block, but again a bit short in front of the magazine but there’s usually no problems dropping any scope on this rifle.
I used a Hawke 3 – 9 X 50 Airmax® with Map 6 Ballistic Reticule and even with a larger optic such as this on board the TDR feels solid on aim and still very light and manoeuvrable.

As for accuracy – do you really need to ask?  Feed the rifle quality ammo and like its fixed formed relative it gives stunning results out to 40 yards with thumbnail size groups easily achieved from a rested position. The 15.75” barrel is a top quality, free-floating, Lothar Walther with an O-ring insert strengthening band and the Pro 76 silencer does a very efficient job of keeping the muzzle report nice and quiet!

In my opinion, the TDR in .177 calibre is now even more of a desirable rifle. Even its original detractors must now see this is a serious hunting tool and it really does deserve to be treated as such.

Although I personally like these trimmed, modular-type rifles, there is good reason at times to for anyone to have a TDR, as sometimes ‘discretion’ when carrying and transportation to a shooting area is of importance. Due to the neat, non-threatening nature of the dedicated bag it can be carried easily and discreetly without upsetting the public.

Personally, I could easily find a place in my armoury for this rifle even though I already own a .22 version. In fact, looks like I’m going to have to save my pennies as I’m totally smitten with the new .177” versions as I’m sure others will be.

We Reckon:
In 177 this is a stunner
Discreet carry when needed
Accurate and effective