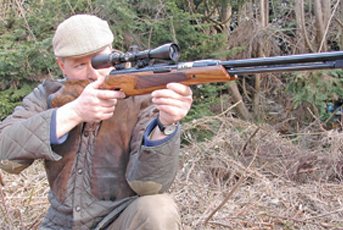 As one of the most successful airgun manufacturers around, Air Arms can be rightfully proud. One look at the hi-tech manufacturing set up of this Sussex based outfit and it’s difficult not to feel a glow of pride. For in these trying times, to see a British company not only competing with the rest, but maintaining their position in a hotly contested market, is both satisfying and heart-warming.

Yes we do still make things, and Air Arms is a fine example of the craft, where clever and imaginative design is executed on state of the art machinery, to a standard, recognised around the globe.

When I was asked to pay a visit to the factory, to basically get a closer look at a special edition version of the TX200, I understandably couldn’t wait. The TX was Air Arms’ answer to the Weihrauch HW77, and with talented airgun designer Ken Turner heavily involved, the project was always likely to impress. Many years down the line, and this fixed barrel, under-lever favourite is still going strong. Now in MKIII guise, the ultra smooth action offers a relatively easy cocking stroke, and heavily muted recoil… and match winning accuracy.

So why the special visit to the Air Arms factory? Why couldn’t they just courier the gun direct to me like any other gun test?

A Great Cause
Well in case you hadn’t noticed, a certain promotion has been going on, and it concerns a very special rifle, more of which in a moment… and a very special charity. Charity first then. ‘Help for Heroes’ has done sterling work over several years now, generating significant funds to help the families of fallen British service men and women, as well as those wounded and disabled as a result of conflicts and incidents around the globe.

Whatever our politics concerning the likes of Afganistan and Iraq (and I’m firmly in the ‘get them home as quickly as possible’ camp), one thing is for sure - our soldiers, by all accounts, are carrying out a thankless task superbly and in extremely difficult conditions. Whilst young and not so young lives may be ravaged and turned upside down, with all the heartache and trauma this brings to their families, ‘Help for Heroes’ just helps to bring some sanity back into the equation, offering hope and support where it’s most needed.

A Great Rifle
Step up Air Arms, and a rather special rifle, which, has been produced solely to generate funds for this most special of charities.

The TX200 has long been established as one of the very best spring powered rifles in existence, so it only seems fitting that this most venerated of guns should be celebrated in style, come its 21st birthday.

What better way then, than a unique, specially commissioned version, with a hand engraved action, dropped into a bespoke walnut, hand finished stock; all produced in aid of our servicemen and women? This one-off rifle could be yours for £5, since that’s the cost of a raffle ticket - on sale now!

Such a special rifle needs cosseting until it finds an owner, so with strict instructions that it couldn’t leave the factory unless it was being escorted to a show in its protective presentation cabinet, an appointment was in order to get up close and personal with this most gorgeous of specimens.

Top Grade Walnut
Special features are many and varied, so let’s start with that stunning woodwork. Manufactured as a special by Minelli in Italy, the TX200 sporter design is this time crafted from exhibition grade walnut, and as a lifelong fan of the stuff, all I can say is in the flesh, it’s simply‘mouthwatering’. The usual fish-scale chequering is applied, but given the luxurious grain pattern, even this is accentuated.

Modern Air Arms stocks are pretty tasty as standard these days, yet the rosewood cap and added ‘AA’ plate, complete with hallmark, that sits at the base of this rifle’s grip, takes the TX200 to new heights. Moving to the action, this ‘21’ special is treated to hand engraving, with superbly cut scrolling covering most of the rear section of the main cylinder; with ‘AIR-ARMS TX200 MADE IN ENGLAND’ set off beautifully in the centre. More engraving sits just forward of the sliding breech, with ‘21st’ taking pride of place in the design work.

A gold plated trigger completes the spec, making this surely one of the most desirable rifles of its type.

Roll Up, Roll Up
If you want to be in with a shout at winning this most exclusive of rifles, and surely one of the most sought after airguns on the planet, not to mention help to change lives along the way, then enter the raffle and set your mind at rest. If you’re in any doubt, take another close look at the creamy swirling grain in that exhibition grade walnut, and tell me you’re going to pass up the offer!

The TX200- 21, 21st Anniversary model is due to be given away to one lucky winner at the CLA Game Fair, held this year at the stunning Belvoir Castle, in Grantham, Leicestershire; where the last few tickets will still be available, before the grand draw takes place! On that note, good luck to all. Of course it will be embarrassing when I win it, but that’s life!

Well done Air Arms, for a fantastic gesture, and happy Birthday to an airgun icon! GM