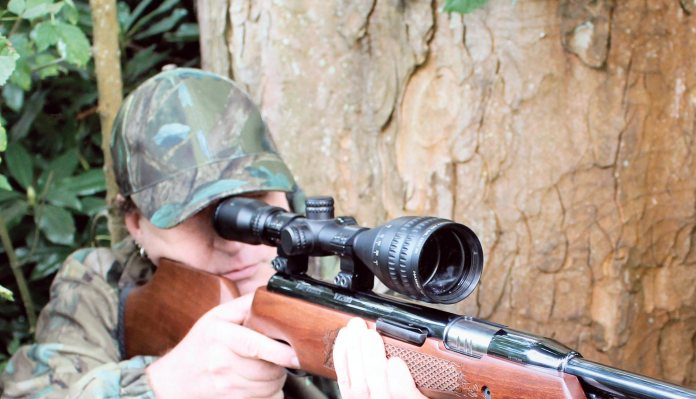 Even though I’ve seemingly always had a ‘TX’ in my armoury, once including the much sought after and unfortunately now discontinued TX200SR (which I will always regret selling), it’s only recently I realised I’ve never tested the standard length rifle version. Strange when you consider I’ve owned, extensively used and tested the TX200 HC (Hunter Carbine) version on more than one occasion, so I feel to do the TX range justice it’s definitely hightime I got my mitts on the TX200 MkIII – a rifle rated by many as one of the best all-round mechanical action air rifles suited to competition and field use.

Though the latest stock design still impresses, it’s actually quite some time since Air Arms re-vamped the rifles in their spring gun roster. However, even now the design doesn’t look dated and is still an impressive looking piece of hardware; so without further ado, time to check out the woodwork and action of this great all-rounder.

The quality beech wood stock boasts a generously sized, relatively high, right-hand roll over cheekpiece and a ventilated rubber buttpad. The neck of the relatively steep drop down pistol grip is quite slim in comparison to the rest of the design which makes for a very comfortable hold. The slab-sided, deep-set forend is quite lengthy but in proportion to the rest of the rifle, so it doesn’t feel or appear out of place. It’s here the MkIII could almost be considered elegant, as the forend displays a very nicely contoured and forward tapered design to end in a semi-Schnable tip.

The stock boasts an attractive and generous amount of checkering that Air Arms term as high-definition. Based on a fish scale pattern, its laser-cut and oil-finish give a well-defined appearance. It’s applied on the pistol grip and forend, plus it even has engraved fleur-de-lis flourishes incorporated into the design that add even more style to the overall cosmetics. These panels are ideally positioned along the forend allowing ‘contact’ no matter how and where you hold the rifle with your leading hand. Another nice touch is that the pistol grip also has a stylish rosewood end cap with a white line spacer. Incidentally the stock is available in Walnut plus there’s a dedicated lefthand option available.

The relatively lengthy underlever is held securely under the barrel by a sprung ball bearing détente, but unlatches quite easily from the rather basic looking yet practical underslung retaining block. While the HC version comes supplied with a cocking aid sleeve, the standard TX has two metal rings machined into the front end of the lever to help you grip it mainly when you ‘unlatch’ it rather than as an aid for the cocking stroke. Slightly set back from the under-lever housing to prevent ‘over-travel’, a hard rubber grommet is installed on the underside of the chunky barrel shroud, which also shows its worth if you’ve fitted a sling as the lever doesn’t rattle around while you’re moving.

The cocking stroke is quite lengthy but very smooth in operation. It’s while undertaking this procedure you hear the familiar three clicks as it progresses back until finally engaging with the trigger sears. As the rifle is cocked the stainless steel breech cover slides back into the action to allow access for loading the pellet. Upon completion of the cocking stroke, the automatic trigger safety comes into play, this is a button positioned at the rear/left of the air cylinder that ‘pops-out’ to show a green colour band visually indicating the rifle is on SAFE. With the loading bay open a pellet can be easily thumbed into the breech of the Lothar Walther barrel. Then the large elongated rocker catch positioned just rear of the sliding breech on the right of the action needs to be pressed inwards to allow you to return the lever to the original closed position.

Another thing worth noting is that the under-lever is attached to an articulated cocking linkage that in turn is attached directly to the piston sleeve rather than any other part of the piston arrangement. This negates the need for the linkage to touch any part of the piston body and in turn helps accuracy, as the piston is free to rotate on firing as the mainspring is unleashed after compression. The company also use internal bearings that ensure the firing cycle stays inline, again resulting in the action on firing staying true. This all might sound like a case of overengineering but fire a TX200 and you can feel the difference, as many agree it behaves unlike any other spring-powered air rifle except maybe for one that’s been custom ‘tuned.’

After mounting a Hawke Sport HD 3-9 X 50AO Mil-Dot IR scope in the lengthy deep-cut dovetails and setting a 30 yard zero using quality ammo, the rifle is easily capable of making ¾-inch groups and even sub one-inch holes out to 40 yards! Granted, this was in .177 calibre, but in my opinion a timely reminder why this rifle has long been an award winner in both Production Springer Class FT as well as HFT.

This rifle deserves a highquality trigger and what better than the highly acclaimed Air Arms CD (Computer Designed) mechanism. After reacquainting myself with this two-stage adjustable gem I still reckon for unleashing ‘spring power’ it’s on a par with the recognised industry standard Weihrauch Rekord mechanism.

The ergonomically curved alloy blade is slightly set back in the metal trigger guard – coupled with the slim neck and steep drop down pistol grip a high degree of control is effortlessly achieved. For a full-power springer the TX200 MkIII has minimal muzzle report and recoil, the latter obviously being quelled due to the weight and balance of the gun. Of course the internal design has to be given credit for the gun’s smooth, predictable and most importantly consistent behaviour during the firing cycle.

When you haven’t been in the company of a TX200 for a while there are initially two factors that will impress: the overall build quality and, equally, the superb high-lustre finish of the metalwork. However this isn’t a rifle that needs to rely on its graceful and stylish cosmetics as it’s a true workhorse that handles well and is extremely accurate.

Even with the undeniable versatility of pre-charged pneumatic air rifles, I reckon every hunter would benefit from owning at least one quality, self-sufficient, spring powered mechanical action air rifle, and with seemingly so many new models of springers available today it’s good to see a rifle with a pedigree such as the Air Arms TX200 MkIII can still stand up to the opposition. My thanks to T & J. J McAvoy Ltd (01257 426129 www.guns.gb.com) for loaning me the rifle on test.