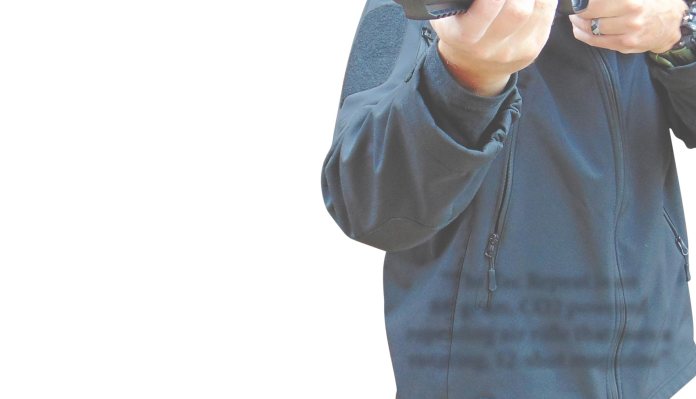 Sometimes, first impressions can be a little deceiving in life and that can certainly be true when it comes to reviewing guns and gear. When I first took the Tac Repeat from ASG out of its box and held it, I thought to myself ‘plastic fantastic!’ but in a bit of a negative way. Why? Well, let’s dig in and take a closer look but let me tell you, all negativity is blown out of the water when you shoot this thing!

So, what is it then? The Tac Repeat is an 88-gram, C02 powered repeating air rifle that uses a rotating, 12-shot magazine. Going from the rear then and looking at the stock as a whole, it is a little plasticky and hollow and I think that is what I first noticed about the Tac Repeat when unboxing it. In fact, there is no external metal on this rifle; so, on the up-side of that I guess that you could say that it is weather proof! But when shouldered, the Tac Repeat does feel really good and weighing in at just over 2.5kg is pretty hefty but in a good way. The buttpad is hard rubber with slats on the face to offer grip in the shoulder.

Moving on to the stock itself, it is ambidextrous with a nice, large cheekpiece on either side. The underside is skeletonised, with the added bonus of a sling swivel stud but with no sign of one anywhere near the front end, which is a shame. The pistol grip is quite chunky and has three sections of stippling on either side with the ASG logo. The whole stock is full polymer and the stock flows from the pistol grip straight into the trigger guard and then flows on to the forend, which is quite hefty and wide as this is where the 88-gram power source is located. There are also three stippled panels on either side of it, to aid grip and right at the end of the underside is a section of Picatinny rail to add accessories, but I would definitely go for a bipod to enhance the fun when tin can bashing!

To open the forend, you just have to press and push the bottom or underside of it where it says ‘press’ on a small button and then the whole forend slides off, to reveal where the screw-in, 88- gram cartridge goes, I must admit, it’s pretty neat and very easy to swap out CO2. Not only that but it locks up solidly when you slide it back on and, with it being quite wide to house the CO2 cartridge, it is also very comfortable to hold.

The barrel is rifled steel and in a polymer shroud, which looks good, especially with the flat rib along the top. The sights are not bad at all, with the rear being a fully adjustable notch type and the front is my favourite, a fibre optic. If you want to fit a scope, then there is plenty of Picatinny rail up top. The safety catch is good and is a manual tang switch on the top of the pistol grip.

Now, the magazines are interesting and are something I’ve have not seen on an airgun before, as there are two different power versions available but worth noting that the rifle only comes with the low powered. The high power one (not supplied with the gun unfortunately) is made from metal and is what you would call a ‘normal’rotary magazine and throws out eight-Joules of power and on my chronograph I was getting an average of 580fps, whereas the low-power one (supplied) is made from polymer and the back of it is covered with just a small hole on each chamber to allow a smaller amount of air (CO2) to propel the pellet at around 240fps; in short, it’s a restricted magazine and this keeps the power at 1.7-Joules.

To load the Tac Repeat, once you have screwed in the 88-gram power source and loaded pellets into the mag, you simply pull open the loading gate and push in the magazine and then close it back up. At first, I was a little confused, because the test gun did not come with any instructions; so, once I had loaded the magazine, I pulled the metal charging handle back that is located on the left-hand side of the forend, then took my first shot. I assumed that after every shot, you have to pull the charging handle back again, but I soon discovered that’s not the case! The Tac Repeat is basically a revolver internally, as the trigger rotates the rotary magazine. This really made me smile, because, once I realised that all I had to do was just pull the trigger for each shot, the fun factor of this rifle really became apparent! 12 shots as fast as you can pull the trigger really makes short work of tin cans on a plinking range I can tell you! Like I said, as it works like a revolver and not like a semi auto (as of course that would be illegal in the UK) the trigger is very heavy; so, don’t expect a match grade trigger! It feels like a double action, with the long, hard trigger pull.

Now the good bit; how this thing shoots on the range! Like I said, the realisation you get when the Tac Repeat shoots like a semi-auto is just awesome. You soon forget the heavy trigger pull when you are slinging those pellets down range! Accuracy was pretty consistent at 25-yards and to be fair, for a CO2 powered rifle, very good. I would even go as far as to say that the Tac Repeat would make a great short range ratter! Safe shooting! Rack