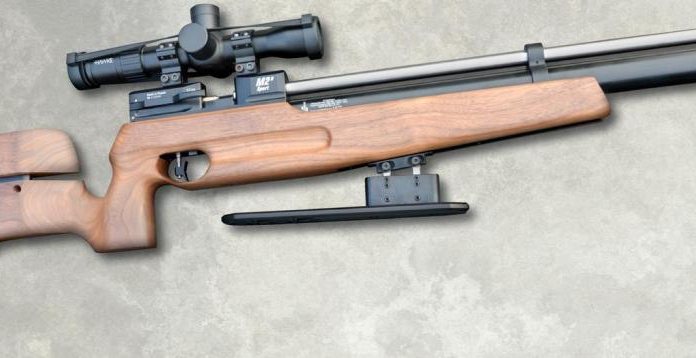 Ataman are a Russian brand that have gained a foothold in the UK over the last few years, and with Sure Shot Airguns the main importer, popularity looks set to increase. They manufacture a variety of models including Bullpup, tactical, benchrest, and FT variants, and their boldly styled and robust PCP actions are fast gaining a reputation.

Where competition is concerned, the old adage of ‘look to see what kit the winners are using’ holds true, and in that respect, two top ten finishes from Ataman in the 2019 FT World Championships, makes a healthy statement. On test here is one of the new MR2 Sport HFT models and this effectively has much the same action, with a shorter cylinder, and a simplified stock; obviously aimed to comply with the rules that govern the Hunter Field Target (HFT) discipline. So, you could say it keeps good company. I say simplified, but the nicely figured walnut, hybrid, sporter/target stock still offers full adjustment around the butt and cheek piece areas. In addition, the burgeoning spec sheet includes an accessory rail, thick stainless steel match barrel, 2-stage match trigger, manometer, regulated action, side-lever cocking, dry fire facility, single shot loading, and probe-style charging. Sounds mouth-watering; so, let’s get started.

First impressions as I ripped open the box, are that this sturdy Ataman is very much my style of rifle. That beefy, over-sized stainless steel Lothar Walther barrel grabs the eye, but the configuration holds much appeal too. A sturdy, floating barrel is the ideal spec in my book and, whilst admittedly this MR2 Sport does come fitted with a barrel support bracket, which doesn’t hold it tight, however, the inner ring can be removed, or the whole thing dispensed with altogether with no ill effects. This is the route taken by most competition shooters in my experience; just for peace of mind, knowing there’s no interference whatsoever going on up front.

Get past that gleaming steel tube, and the eye soon wanders to that rather pleasing walnut stock, complete with satisfyingly deep tapered forend, integral trigger guard, and that nicely shaped ‘no compromise’ target pistol grip. The finish has the appearance of being matt oiled, but either way, with plenty of delicious grain pattern on show, it really looks the part. For the record, Sure Shot will be offering a laminate version, but for me, it’s no contest.

I must say that where the rest of the butt joins the grip, the wood does seem unnervingly thin, but one trusts the designers know what they’re doing with regards to inherent strength versus grain pattern. As for the shaping, it just works really well. A long stretch of accessory rail runs the full length of the underside of the forend taper, and this means that a stock raiser/hamster can be used, mini bipod, counterweight bar, or any other add-on accessory for that matter. A dedicated right-hand grip is quite refreshing, given how we’ve all gone ‘ambi’ these days, and the hand just falls into it with ease. A thumb shelf always helps, but add in the adjustable rubber pad, and moveable cheek panel, and final eye/scope and head/ shoulder alignment can be finely tailored to suit the individual, minimising muscle fatigue into the bargain.

Access to two small Allen screws is on the reverse of the stock, and height of the cheek can be altered here by up to 1.25”. The distance between the centre of the barrel to the base of the pistol grip is exactly 15cm, which coincidentally acts as a perfect guide for HFT, since that is the maximum depth allowed for the base of the forend measured from the centre of the barrel. Later stocks according to Sure Shot, should all have the Ataman logo cut into the wood too.

Looking to the action, both the chunky receiver and cylinder appear to be black anodised to a high standard and, with a semi matt finish afforded, practicality is assured if this gun was ever to be used for hunting. Positive dovetail rails run along the top edges of the action, so fitting a scope is pretty straight forward, and with plenty of clearance around the breech area, there’s no concern about fi nger access with this model. Two charging adaptors are supplied, and one just snaps straight into a Foster coupling, which is super neat, and all I needed to get this model up and running.

Ataman fit a manometer at the front of the cylinder, which means residual pressure can be kept tabs on. However, as previously highlighted with other PCPs, this isn’t a safe place for the gauge, since periodically, you do fi nd yourself almost looking down the barrel to check the pressure levels; not ideal! Under the action has to be a safer bet.

Charging the MR2 Sport HFT is done via the probe method, and whilst this can be easy and one of the quickest, just make sure the probe remains properly seated throughout. Ataman advertise the fill pressure with this model as 300bar, which is a pretty high fi gure, compared to many rivals. In fact, stick to this figure and you’ll get far less fills from a diver’s bottle, and you’ll also place all the components under greater stress for their working life. However, unless you’re obsessed with the largest number of shots possible, you simply don’t have to charge to the max. Take the more practical approach, stick to a lower figure of 200bar, and you’ll find it makes far more sense all round. One negative here though, no valve cover comes supplied, so that inlet remains vulnerable to the elements and dirt. Not the biggest problem to sort mind you, but a little annoying.

As mentioned, the inclusion of that accessory rail means that all manner of gadgets can be employed to further the cause. UK importers, Sure Shot Airguns, sent me through one of their fully adjustable Hamster stock riser plates to include with the test, and these are available as an optional extra for £79. They are similar in size to the Air Arms version and come with holes pre-drilled through the base, and the option to attach with the bulk of the length either towards the front or back of the forend. The design allows for the base block to first be slid onto the accessory rail and then tightened into place with Allen screws. Once in place on the accessory rail, the series of screws on the pillar section can be slackened off, and the base lowered or raised and the angle altered as required. All in all; a neat add-on, which can seriously transform handling in the heat of competition. Fancy the full-blown FT adjustable forend, then that is also available for around the £140 mark, although the adjustment won’t be permissible in HFT, remember!

Ataman fit a fully adjustable match trigger to this model and, whilst I’m no expert on setting up such a unit, from reading the instructions, it is possible to make a series of fine corrections, including the trigger shoe position, 1st and 2nd stage travel and trigger stop. Fine tweaking is therefore possible, for those qualified and up to the task.

Look to the left side of the breech, and you may notice the small button marked ‘F’ at the front denoting ‘Fire’, or ‘T’ at the rear, which I assume stands for ‘Test. Pull back the side lever and switch the button to Test, then close it and it will allow you to dry fi re without firing either a pellet or using air, which is a handy feature for training purposes indoors. Cock again and switch back to ‘F’ and the gun is again live and ready.

Side levers have become increasingly popular on PCPs and cocking the Ataman is a slick operation, as it springs open, which minimises effort. Another nice feature is the way it clicks into a held position when open, so will only return on command and its over centre design sees it snap closed on its return. Roll the pellet across the loading channel, nudge the lever closed, and confidence is very much instilled.

Shot count wise, from the lower 200 bar fill, I still managed 95-shots over the chrono, all within a respectable total spread of 20fps, so do you really need that 300bar fill? The regulated action is set at a pressure of 90bar.

And so, to accuracy. The weight of expectation on high class kit can sometimes take away from the pleasure of testing and with inclement weather interfering with my testing, frustration was building before it finally gave in, and my window of opportunity arrived. Serious groups over 38yds began to form, with JSB Exact Premium’s just edging it with sub-1/4”, narrowly ahead of Air Arms Diabolo Fields.

As highlighted, technical performance is one thing, but results hard won at the business end of a top tournament, such as the 2019 World FT Championships shows the brand has clearly arrived. Strong results all round, and evidence that this Russian beauty has what it takes. So, if competition shooting appeals, this HFT special is a contender for sure, being good looking and highly capable.