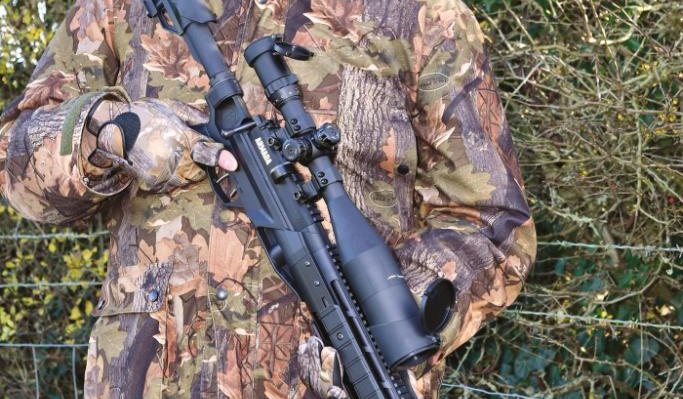 Military styling where airguns are concerned, often divides opinion and our test rifle here, the Benjamin Armada, is a prime candidate. Guaranteed to ruffle a few feathers in certain quarters, yet be warmly welcomed in others, with a huge grin from ear to ear. Each to their own, as they say, and whilst I wouldn’t normally plump for such overtly ‘macho’ kit, having now spent time with this model, I’m left with an appreciation of the design brief, and its slick execution. Crosman, as a brand, seem content to occupy the middle ground, yet there’s something about their approach that I find not only refreshing, but immensely appealing. This style of airgun is increasingly popular, and with a host of on-board features all part of the blueprint, it has to be an exciting prospect for fans of the dark arts so to speak.

For yes, I think we can safely say we are in ‘Tactical’ territory here, and the Armada comes bristling with add-ons and features, all designed to enhance the experience. Sold as a package deal, there’s a 10-shot magazine, (irrespective of calibre) filling adaptor, instructions, bipod, Center Point 4-16x56 scope, and a set of mounts. There’s also an adjustable, 2-stage trigger, full length barrel shroud, Picatinny scope and accessory rails, manometer (air pressure gauge), synthetic AR15 like stock with adjustable cheek piece, and manual safety catch. But there’s more, the bolt is actually reversible, which means that, in conjunction with the ambi stock, the action can be shot left handed. Always welcome, and a measure of the level of detail that Crosman have gone to, with this model.

Pick up the Armada, and it soon becomes apparent that all is not what it seems in terms of materials used. Yes, there is copious use of polymers for the stock, yet all the main, free-float style forend tube is metal, as is the rear buffer tube that accepts the telescopic butt section. Thus, there’s plenty of weight, and impressive balance overall. The entire middle section supporting the receiver is plastic along with the AR15-style pistol grip, yet the quality and precision of the moulding means that nothing feels cheap. My only negative concerns the butt section, where a complete lack of rubber pad, had me thinking something had fallen off in the box!

That aside, the way the length of pull (LOP) can be extended via the simple squeezing of the lever, (inside the rear triangle at the butt) is a very neat piece of design, and a great asset in allowing this model to be used by juniors and smaller shooters, waiting to grow into the rifle. Squeeze it up, pull out and extend or retract to the desired length. It’s that simple, and with three inches of movement, this brings great versatility. Crosman term this design as ‘modular’, which refers to the pistol grip section being compatible with Mil Spec AR15 types, bringing further versatility, again for the more military-minded enthusiasts.

As for the barrel shroud, I couldn’t resist unscrewing the knurled cap to see what lay within, and this is where two plastic inserts end to end have been used to form what Crosman term an ‘integrated resonance dampener’. Effectively, a small expansion chamber, which should tame any muzzle crack, so we’ll see how that works in a moment. The action gets a matt black finish, as does the shroud and ventilated forend, so the end result is nothing if not highly practical.

As mentioned, the Armada is a package deal, so time to assemble the constituent parts. The Center Point 4-16x56 scope is a bit of a beast, and with that whopping objective lens, needs high mounts to keep it clear of the action. All supplied of course, and I soon had the Picatinny style mounts clamped onto the rails over the action. Tightening of the oversized bolts can mainly be done by hand too, making everything very user friendly, but it always makes sense to give a gentle nip up with a tool, or pass a small Allen key through the hole in the mount bolts and gently twist. Set the eye relief, and scope position, advisable over a couple of sessions, and job done.

Now for the bipod, which to all intents and purposes is a fixed (non-canting) Harris 6-9” clone. The individual legs can be snapped down, where they lock out by spring pressure. The lower sections are extendable to offer height adjustment. The problem with copies like this is that things aren’t quite as slick as they should be. Like the original, it uses a scissors clamp to attach to a QD sling stud in the lower forend.

Crosman keep charging simple, and the sight of a Foster-style valve is always welcome, since this is as near as standard as we have in the industry, with everyone, using a myriad of adaptor designs! To charge the Armada to the prescribed 3000psi/200bar, first unscrew the valve cover, snap on the connector, and slowly fill the cylinder. Shut off the air, bleed, disconnect, and you’re good to go.

The 10-shot magazine supplied with this model feels well-made and looks like a mini version of the original Theoben design. Twist the cover clockwise, all the way round until it snaps into a held position, drop a pellet headfirst into the first chamber, which locks the drum - then twist the cover anticlockwise, filling each one as you go. Now pull the bolt rearwards to cock the action, insert the mag from the right side until it snaps into place, close the bolt, and shot number one is waiting.

With the scope and bipod onboard, this combo tips the scales at a hefty 10.7lbs, which is not insignificant! Yet shoulder the Armada, and the design features soon become apparent. The bipod opens up a whole new dimension, whether as a gun rest or shooting aid. As for the angled pistol grip, my hand fell perfectly onto the moulded contours, and the plastic cladding panels up front, mean the forward hand is spared any contact with cold steel, which makes a big difference on a frosty day, believe me!

Cocking the perfectly shaped bolt handle requires minimal effort, couple that with the highly competent and precise trigger, reliable magazine mechanism, and the whole firing cycle has to be seen as a pleasant experience. I love that near straight trigger blade, lifted from Benjamin’s Marauder model, and the 2-stage mechanism is adjustable for pull, position, first and second stages, plus there’s an in-guard, tandem, lever-type safety catch. It’s a rare occurrence for me to have a dabble at adjustment, but the instructions leaflet is so comprehensive that I felt compelled. A very satisfying Allen key twiddling session later, and I had myself something that was commendably light and predictable, always conducive to down range performance.

That chunky scope does its job, and whilst the reticle is a bit lack lustre and it’s a relative budget model at the end of the day, in use, it all comes together nicely, with positive turret clicks and respectable image quality. So, any negatives to report? Well, whilst muzzle crack is largely tamed, the shot cycle generates plenty of twang from the hammer spring, so the Armada is no stealth hunter. Also, and as previously highlighted, the bipod clamp did prove a bit stubborn to adjust on test, although I got there in the end.

Representative groups shot over 25 yards on test could comfortably be covered by a 5p piece, and taking it out to 35, produced groups around 5/8” (roughly penny sized). All fairly encouraging and satisfying to witness over an extended test period. As for shot count, Benjamin seem determined to play it safe with their quoted figures, and on test, there’s no doubt that the best recorded consistency came with the first 30 shots, a count they list in their spec sheet. That gave a highly creditable 15fps total spread on test, which is a level of consistency worthy of competition grade equipment, but not everyone shares my obsession for Hunter Field Target (that’s true, Mark). Lighten up and opt to enjoy the shooting with a more stress free approach, and from a 200bar fill or near offer with Crosman’s prescribed 3000psi, the Armada will comfortably knock out 90 or so shots. My chrono read-out showed consistency here of 39fps over the charge, and admittedly power levels take a dip towards the tail end, but for an extended informal plinking session, or target shoot, you’ve basically got plenty of shots to play with.

With little change from £900, the Armada isn’t cheap, and it’s up against plenty of capable rivals. That said, I was always a fan of Benjamin’s Marauder, and with this model sharing many of the same appealing features, and a similar feel, it’s difficult not to be charmed by the Crosman way of doing things. Those macho looks will strongly divide opinion for sure. But if military-style airguns tick your boxes, then it has the burgeoning spec sheet, and a highly competent level of performance to back it up.