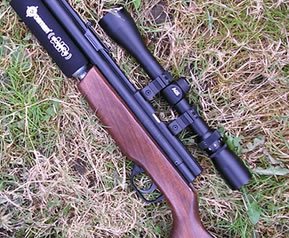 The Crosman Corporation of America are well known for their selection of relatively cheap and cheerful pump-up style, pneumatic air rifles. But with the change in the UK law in 1997, effectively taking CO2 powered guns ‘off ticket’, more and more CO2 models have found there way onto our market.

For anyone not familiar with CO2, it basically relies on metal capsules which come ready filled with Carbon Dioxide in liquid form. These disposable capsules are simply screwed into the rifle, with the power being instantaneous as the liquid vaporises back into a gas as it’s released on each shot. Crosman have been at the forefront of this development, and with their acquisition of the Benjamin/Sheridan Corporation in 1992, have the market well and truly sewn up.

CO2 as a power source, has several advantages, the most obvious being that no effort has to be expended to charge the rifle. The shooter doesn’t have to waste energy cocking the action (other than pulling back the bolt of course), and no pumping up or charging of the system is required at all. A new capsule is just screwed into place, which pierces the seal, and allows CO2 to be released. The action can then begin.

It should be noted that in the extremely precise and competitive world of 10 metre match shooting, many top flight match rifles utilize CO2 as a power source. Despite the fact that the pressure of CO2 can fluctuate in temperature change, possibly causing some small change in impact, it is still selected by some top shots, who set the rifle up early and allow the pressure to stabilize. Under these conditions, CO2 can be extremely consistent.

The rifle on test here is the Benjamin Buccaneer, and as a general purpose rifle, most of its shooting will probably take place at 30yds or less, and for most applications, consistency should simply not be an issue. One of the new breed of CO2 powered rifles, the Buccaneer utilizes the relatively new 88gram ‘Airsource’ canisters, which, despite its name, contains CO2 not air. Traditionally, this type of gun has relied on 12gram bulbs or ‘Powerlets’, as Crosman like to call them; rather similar in appearance to those used in the old ‘Soda stream’ drinks dispenser. These have had their place, but their low capacity has meant that any prospective shooter has needed to have a ready supply of capsules to keep the session going.  Using Airsource canisters shooters can now look forward to between 200 and 300 shots per can, dependant upon the gun being used.

First impressions of the Buccaneer are one of a well presented, predominantly fun rifle for the novice shooter. The no-nonsense approach means some subtleties maybe missing along the way; yet this has to be taken into account, bearing in mind its target customers.

An ingenious little plastic device (the Crosblock), locks the trigger. Probably a result of US safety demands, it’s a welcome addition, and since it can only add pence to the overall price, one wonders why it’s not more regularly supplied with airguns in general.

The most striking feature of this gun has to be that outsized Airsource capsule, which, with its neat little nylon ‘pull-on’ cover, doubles as the forend, with which to grip the rifle. The comfort afforded by the cover should not be underestimated, as that CO2 cylinder takes on the qualities of an ice block on a cold day.

The stock itself is three quarter length and fairly simple, but in keeping with the straight forward approach. Apparently machined from American hardwood, it has the appearance of beech, finished in a satin varnish. There’s no chequering or markings of any kind on the woodwork, yet a pleasant grain showed through on the test rifle. The cheekpiece is very low and rather vague for scope use, yet for ‘vagueness’ you could substitute ‘versatile’, and with many beginners getting pleasure from this rifle, the absence of any angular more defined features, maybe no bad thing. I have to say I found the butt pad disappointing, in that the plastic serrated strip is rock hard, and hardly adds comfort when taking aim. Surely the addition of a thin piece of rubber in this area would add peanuts to the price, yet a disproportionate increase to the overall appeal. A nicely thinned out pistol grip completes the shaping, and as a general purpose product, I think the stock is a reasonable compromise.

The metalwork on the Buccaneer is treated to a matt black coating, best described as a parkerized finish.  A 19 inch rifled barrel runs the full length, above what looks like a conventional compressed air cylinder. This is in fact a ‘dummy’ cylinder which remains empty, but lends the rifle a purposeful look nonetheless.

The barrel itself is extremely thin, but it’s anchored to the action along it’s full length, so it cannot be bent in any way.  Both barrel and cylinder go into a casting at the muzzle end which is threaded to accept a silencer.

Benjamin fit rather nice open sights to this gun, as standard, and quite a long site line is possible due to the dimensions. I think on this type of rifle, where the CO2 system lends itself so well to fast fire, informal target and fun shooting, it would be a shame not to experiment with the iron sights.

The 2 stage trigger is quite a chunky affair, surrounded by a solid cast guard, incorporating a push button safety catch. The pull could hardly be described as light, yet a few pounds in weight is acceptable on a rifle of this type, and necessary to satisfy the American safety laws. The wide trigger blade does help to spread the load on the finger, however.
Scope rails are cut into the top of the receiver, but because of the layout, care should be taken to position any scope mounts so as not to foul the bolt handle.

Another clever feature of the Buccaneer is the built in dual power option. When the bolt is pulled back to the first stage, velocity will be around the 520fps mark.  However, if higher power is required, the bolt can be pulled back completely, clicking twice in the process and effectively increasing the hammer stroke; thus the amount of CO2 allowed to vaporise on each shot.  This then returns an increase of a further 50fps.

Once shouldered, the Buccaneer feels a very pointable little rifle, although because of the relatively light weight, the balance is improved enormously by the addition of a silencer. A Logun example was supplied for the test, which threaded straight on and held the muzzle down perfectly.

Accuracy was fair, and at 30yds, 1inch groups were the norm using .22 Crosman Accupells and the higher power setting.  On lower power, the groups opened up slightly, with an average of 1 ¼ inch.

Whilst CO2 is comparatively expensive when compared to conventional compressed air, the advent of the larger 88gram capsules and the option of the lower power setting (i.e. less CO2 used), means the number of shots available is greatly increased. On test I had 280 shots from the Airsource, having mixed high and low power, so the shot potential is quite impressive. In addition, buying the capsules in bulk can slash the running costs considerably.

The Benjamin Buccaneer offers a novel approach for new shooters to our sport, who want a basic starting pack that offers effortless recoilless shooting, and as such, is well worth considering.