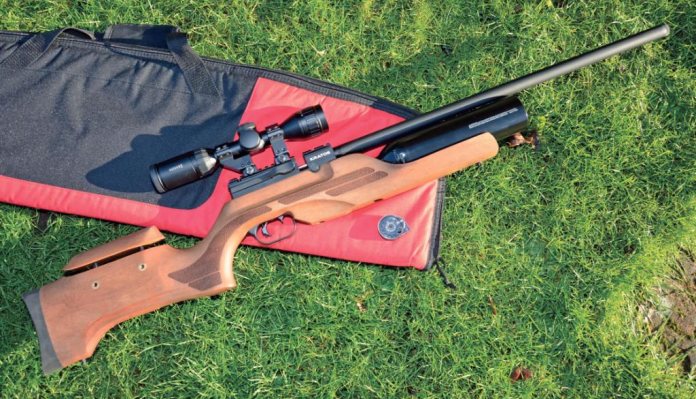 Hands up who’s fed up with intermittent lockdowns? Frustrating, tedious, maddening - many of us have experienced all manner of emotions, over the past year or so. Things will get better, they always do, and much will return to normal. But for now, staying positive is easier said than done, and resourcefulness has become the order of the day, as businesses and individuals strive to keep operational.

The show must go on

For many of us connected with the shooting industry, one of the biggest frustrations has been the temporary suspensions of all the shooting shows. I enjoy getting to see not only all the latest kit and new models before they go on general release, but also old friends and industry associates. Shows and Game Fairs are, of course, in normal times, a showcase for the sport, and a golden opportunity for companies to communicate their intentions, before much of their target audience. So when Range Right contacted me, just before Christmas 2020, to invite me to an online ‘virtual’ trade show, produced by Velocity Outdoors in the USA, I was intrigued and excited in equal measure.

If you’re not familiar with the name, Velocity Outdoors are the huge umbrella group that own Crosman and Benjamin brands, among others and having harboured something of a soft spot for their products since my youth, I was genuinely excited to see what new guns were in the pipeline. UK distributor, Range Right were understandably keen to generate interest, and with the Country and Western star Tim Montana signed up to entertain the captive audience in between lectures - his latest track ‘Do it Fast’ is mighty catchy -, the show, I reckon, went down a storm.

On test here is the brand new Benjamin Kratos (meaning a God of war in Greek mythology), one of the more upmarket offerings, which are produced under the Craftsman Series label. The airgun comes slickly packaged and inside the padded box, you can expect to find the Kratos itself, cloaked in super matt Turkish Walnut, with two cassette magazines, Allen keys, filling adaptor and even a small Picatinny accessory rail for the forend. Buddy bottle-fed, this model also comes fitted with sling swivels, a full-length barrel shroud, adjustable trigger shoe, in-guard safety, adjustable cheek piece, side lever, and power adjuster.

It was Theoben who popularized the buddy bottle format with their super successful Rapid 7, and whilst this style of airgun is often capable of a huge shot count, the rather uncivilized feature of having to grip cold steel up front, has sometimes been a problem. No such reservations here though, and despite my large frame, and naturally long reach, I can grip the Kratos in comfort with the best of them! That sleek, satisfyingly thinned down support up front, feels perfect in the aim, and coupled with the drop down pistol grip and lasercut stippling, control and support have been well thought through.

The cheek piece can be adjusted and set for the desired height by slackening off the twin Allen bolts on the reverse side of the butt. Keep some resistance and the comb can then be slid up or down, then tightened at the desired point. Perfect eye/ scope alignment awaits, after a couple of judicious tweaking sessions. As for the naturally deep forend section just past the trigger, standing shots are well catered for.

This Benjamin is supplied, as mentioned, with sling mounting studs as standard, and you’ll just need to buy QD swivels to snap a sling into place. If you fancy using a bipod, then there is a recessed brass mounting point under the forend. The neat little accessory rail supplied can also be screwed straight onto it, although it’s possible it could foul the comfortable grip afforded by that sleek extended section. Trial and error then here.

Surprisingly, the 2-stage trigger isn’t adjustable regarding pull, but my test sample, I have to say, came with a pleasingly light, and fairly predictable release. That said, given the asking price, it’s a surprising omission. The manufacturers do fit a targetstyle trigger shoe, and this is height and angle adjustable via a small screw on the support rod. So overall, I can’t really complain. However, if you like a harder trigger pull, then you may have something to moan about.

I like Benjamin/Crosman’s approach to PCP charging, as they normally use a Foster link on the valve. The Foster spring-loaded snap-on female end piece is about as standard as we get in the industry, and that’s exactly what fits the valve here. Most pumps and bottles come with this as a starter, so it keeps things simple. There’s plenty of clearance designed in, with that super large recess on the underside of the stock. A clearly marked manometer sits alongside the valve too, so it’s easy to keep an eye on residual pressures at all times. Velocity Outdoors specify a 3000psi fill pressure (209bar I believe) so stick to 200bar and you’ll be fine.

Before we see what this model can do, it’s time to fill the magazine. As mentioned, two well-made mags come supplied, and the cassette design almost mirrors the original Theoben one. To fill, twist the clear spring-loaded cover clockwise, all the way around until the hole in the cover lines up with the inner drum. Drop a pellet in headfirst and this will hold the drum in place. Now drop a pellet headfirst into all the remaining chambers in turn, then snap the cover closed and flush. It’s now full, with 12-shots at the ready, in .22 calibre.

Pull back the side-lever to cock the hammer and set the trigger, and with the lever open, the magazine pushes into the mag well, unusually, widest part first, from the right-hand side. It snaps into place in a satisfying manner, and the side-lever can then be closed, chambering the first pellet. If you feel the need for a safety catch, then this one is perfectly positioned, just requiring a gentle pull back to engage, and a nudge forwards to free the trigger. The fact that its manual means the smooth speed loading feature of the side-lever cocking doesn’t have to be interrupted. And super slick it is too, without a single hitch for the duration of my test.

Chronograph testing, when a magazine is fitted, does encourage me to shoot quite fast, especially to get through a large shot count. This highlight that the Kratos, in keeping with many multishot PCP’s on the market, is capable of loading two pellets at once. Be overly gentle with the side-lever and you’ll possibly cycle the mag but not cock the hammer and trigger. Go to cock the system again and another pellet backs up behind the first. No major problem, as normal deliberate shooting is majorly different to a speeded-up chrono session, but it’s a technicality that needs reporting nonetheless.

As for performance figures, don’t forget there’s a power adjuster on board, and this has a fingerfriendly knurled knob ready and waiting. It isn’t marked up, but look to the right side of the action and there’s a mini scale, with plus and minus for guidance. I dialled to the lowest setting just to get some idea of what was possible, and this generated power around 5.7 ft/lbs. Expect a huge shot count on low power, and if you just want an extended plinking session, where power doesn’t matter, then the power adjuster becomes a brilliant feature.

Set to full power, my chrono tests recorded 240 shots with a total spread of 36 FPS, using the JSB Jumbo pellets supplied. Top power was actually a bit low on my test rifle, with 10 ft/lbs a little disappointing. However, tight ragged clusters at 25 yards and the odd 1/2” group over 40 yards (3/4” more representative) showed that this Benjamin had a satisfying level of accuracy on demand, to back up that burgeoning list of features.

Away from frantic speed chronographing, under normal circumstances, the side-lever is smooth and reliable, with only minimal effort required to cycle the action. Factor in the highly attractive woodwork and userfriendly magazine, trigger, and cheek adjustment, and there’s much to appreciate from this American inspired sporter.

Currently only available in .22 and .25 calibre, the UK distributors are negotiating on a .177 version, so that could yet see the light of day. As it stands, I really enjoyed the slick side-lever action and loved the woodwork. So perhaps time to invest in this old favourite airgun brand, and to quote Tim Montana, ‘Do it Fast’!