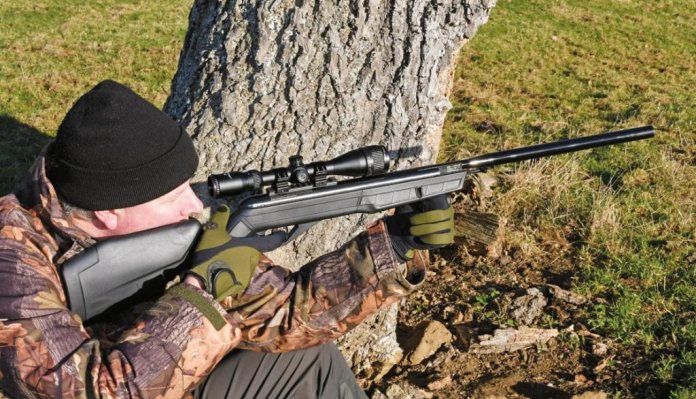 Crosman, in the United States, is a huge concern, and the famous Benjamin brand has now been part of their portfolio for some while. On test here is one of their new breed of break-barrel airguns, and it comes packed with features, and plenty of character.

The Benjamin NP2 Steel Eagle is a traditional, break-barrel design, yet built around the company’s

NP2 power-plant. And here’s what you get; an ultra-modern synthetic sporter stock, 2-stage trigger, safety catch, Picatinny-style scope rail, full-length barrel shroud/ moderator, and sling swivels, is enough to raise eyebrows, yet there’s more. As with several models in their product line-up, the Crosman Corporation supply this rifle as a package deal, complete with a sight and mounts. Their catalogue lists a 4x32 ‘Centerpoint scope as the deal, but confusingly, my test rifle came with a 4x40 AO spec, and mounts. Either way, with everything you need supplied, the action can start the minute the gun comes out the protective box.

NP2 stands for Nitro Piston mk2, and for those unfamiliar, that’s Crosman’s own version of the gas-ram system, where the conventional mainspring inside the cylinder, is replaced with a sealed chamber of air, or in this case nitrogen gas. When the action is cocked, the contained volume of gas is compressed. When the gun fires, it rapidly expands and powers the piston, which in turn compresses the volume of air ahead of it- powering the pellet in the usual way. A succession of manufacturers has tried to recreate a version of this, Theoben’s original design, but with varying success. How a gas-ram model shoots can therefore vary enormously, and we’ll come to how the Steel Eagle performs in a moment.

As mentioned, my test gun came with the Centerpoint 4x40 AO scope already sitting in the split ring mounts. The action is fitted with a Picatinny-style rail system, so the mounts just need to be slightly loosened, then the small cross-bar from each one can be located into the rail. When all is sitting straight and in the right position, gently and evenly tighten up the side bolts. Picatinny spec can be overkill on an airgun, but the scope certainly can’t move on the gun once correctly fitted!

Pick up this rifle, and that black synthetic stock immediately feels right at home. In keeping with current trends, it’s ambidextrous, but the extended and flared forend, complete with those soft touch grey inserts, is both attractive and really comfortable in the aim. The grip itself is nicely raked, and gets soft touch panels, and with a defined cheek piece, and that angular integral trigger guard, this is a bold and attractive design, that handles as good as it looks. The synthetics are a bit ‘plasticky’ and hollow sounding just towards the rubber butt, but overall, feel satisfyingly well made.

Action-wise, all the steel metal work gets treated to chemical bluing, which whilst not overly lustrous, is robust and smart. The full-length shroud is fitted over the barrel, and under a lamp I could make out an expansion chamber and a couple of baffles just past the muzzle, which all helps tame any noise. Finish to the shroud isn’t quite so impressive, and my review period was enough for my test model’s barrel shroud to develop a small scratch on the exterior. Closer inspection revealed a very thin black paint finish, which was clearly not that durable. Of course, deterioration in the finish largely depends on how well the gun is looked after, but I don’t envisage that shroud staying smartly black for too long after extended use long term!

As for the internals, I was impressed with Crosman’s NP2 development in its original form, and this latest incarnation is definitely among the best performers, in terms of firing cycle characteristics for a gas-ram, that I have encountered. Cocking the Steel Eagle is wonderfully smooth and fairly easy, once the breech has been jolted open. There’s obviously no ‘twang’ from a spring, and the resultant firing cycle is as it should be, more of a quick snap, and super smooth. The kick from the recoil is modest too.

Benjamin specify the 2-stage trigger unit fitted to this rifle as an enhanced, ‘Clean Break’ design, and whilst it’s no supersophisticated mechanism, the addition of a pleasant wide blade, and a reasonable breaking point, means that it is above average for this grade of rifle. Yes, you must pull gently through the creepy sears, but it’s no great obstacle to accurate shot placement, and the subtle nature of the action just adds to the enjoyment. Over the chronograph, a 10-fps total spread over 10-shots, using JSB Exact Jumbo, was impressive, and groups just shy of an inch centre-to-centre over 30yards, were the norm. I would expect that to probably close that down a little further, with more time pellet testing, but it’s a reasonable starting point.

In a competitive market, and at the price point listed, this model is up against some classy hardware for sure; scope included or not! That said, this model is a really nicely presented rifle from the Benjamin stable, with one of the very best gas-ram systems available. So, if this style of rifle appeals, then the Benjamin Steel Eagle NP2 is well worth consideration.