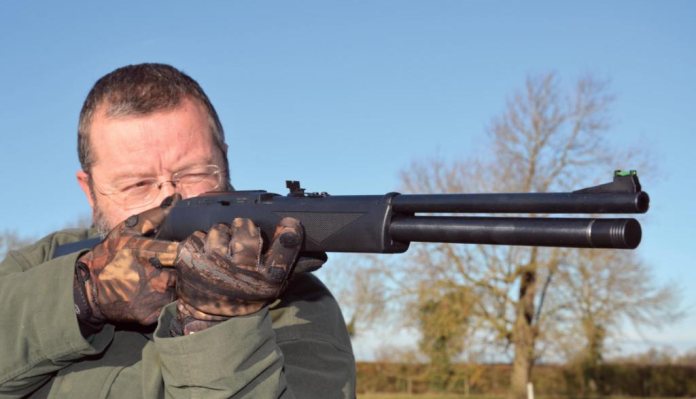 The Crosman Corporation, based in the USA, are best known for manufacturing airguns aimed at the lower end of the market; the fun sector if you will! Millions of airgun shooters worldwide, will have been introduced to the shooting sports via their products. Whilst there are a few up-market offerings tucked away in the line-up, where this famous American brand really scores is in putting a smile on the face of the newcomer and junior shot. Cheap and cheerful options for those discovering the pleasure of airguns for the very first time, has indeed been their stock in trade for decades, and on show here is perhaps a classic example of what the company does best.

Visually, the new Wildfire model is almost identical in profile, to Crosman’s established CO2 powered Repeatair 1077, but with the Wildfire being an aironly, PCP design, it has a fully extended slimline cylinder under the barrel, in place of the CO2 chamber of its stable mate, gives it the look of a hi-capacity semi-auto shotgun. Confusingly, it’s also being marketed as a Benjamin model, (another US brand owned by Crosman) yet my test gun only carries the Crosman name on the breech block. Get past this slightly weak branding though, and the Wildfire is indeed an intriguing gun.

A PCP fitted with a 12-shot, fast-fire, magazine system is an exciting prospect in anyone’s book, and with the design allowing for the mag to be emptied, just as fast as you can pull the trigger, I was understandably eager to get started.

Specification-wise, this model comes fitted with precise, adjustable fibre optic open sights, single-stage trigger, manual safety catch, filling adaptor, and scope rail. Construction is all synthetic/ plastic, save for the barrel, rear sight and cylinder. The moulded sporter stock is ambidextrous, and basic, but that said, quite comfortable in use.

To fully test potential accuracy, I couldn’t resist fitting a scope, but with plastic rails all part of the breech block moulding, it pays to not over tighten the mounts.

The recoilless action of course means that nothing should move during the firing cycle in any case. Charging the cylinder is an easy affair, as this model comes fitted with a standard Fosterstyle valve. The female adaptor supplied, just needs to be connected to an air supply, then charged to a fairly low 2000psi, or 140-bar if you prefer?

Finally, the 12-shot rotary magazine needs to be filled. To do this, first remove it from the action by gripping and squeezing the two tabs each side of the magazine box/ clip just forward of the trigger. Pull the assembly clear, pull the spring-loaded mag retaining catch to the left, and the magazine cylinder can now be released. Fill each chamber with a pellet, drop it back into its slot, close the retaining catch, and snap the whole assembly back into the underside of the action. The Wildfire is now ready to rock!

Shoulder this gun, and the incredible lack of weight (3.7lbs) is immediately apparent. Slow, careful, deliberate aiming does highlight the fairly poor single stage trigger; yet in this mode, and with a scope fitted, I recorded groups of a little over ¾-inches at 20-yards, which for this grade of gun, I thought was quite pleasing. But as Harry Enfield’s annoying Dad character would say; ‘you don’t want to do it like that’! For to try and be methodical and ultra-precise with this gun, is to totally miss the point!

Take off the scope, and look down the satisfyingly long sight line, and those factory-fitted, fibre optic sights are just the job for quick and clear target acquisition. Now take aim, and empty that 12-shot mag as fast as you can, and the Wildfire suddenly comes into its own. Even that simple trigger feels lighter when momentum and speed play their part. I managed 12-shots in 7-seconds that grouped sub-2-inches at 20-yards, which is well within the base of a drink can, which means this gun will take some beating in the pure fun stakes for sure!

From that 140-bar fill, I clocked 60-shots (five magazines worth), before I noticed the residual pressure had dropped to 1000psi. Setting and sticking to a limit of shots is the best way to avoid shooting the Wildfire until power drops off, and a pellet eventually becomes stuck in the barrel. A rod would clear the problem, but it makes sense to avoid the aggravation in the first place! Power is only intended to be low, topping 8 ft/ lbs and averaging around five; and it does tail off quite rapidly, which is no problem, if this gun is treated as pure fun, which is definitely what it is! So, keep a count of your shots, re-charge at the appropriate point, and all should work well. A pressure gauge sits on the underside of the action too, making it easy to keep tabs on power reserves.

If I’m honest, before I had fired the Wildfire, I was initially surprised at the RRP, coming in at just under £300. It sounded quite high given the ‘plasticky feel overall. That said, the no-nonsense, rapid fire element is just great fun, courtesy of the spec, for me to be well and truly won over. Okay, beginners on a budget will find other models, much cheaper and more traditional, to do the job, but for those willing to invest a little more in pure entertainment, the Wildfire is unlikely to disappoint.