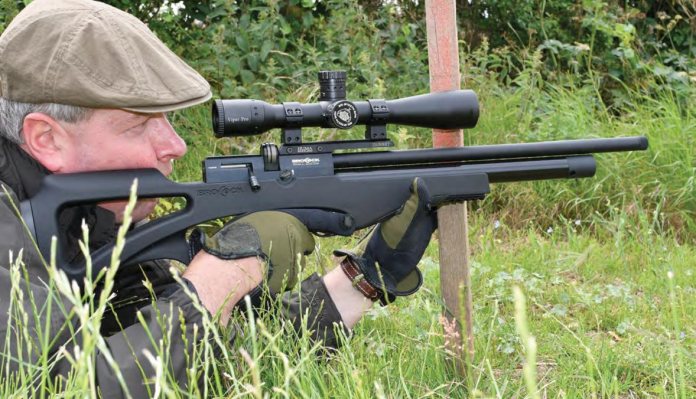 When Brocock introduced the Compatto, it was rightfully seen as a landmark gun; for it not only signified a change of direction for the company, but it also happened to be quite an original idea.

Brocock’s new found bold styling and superior finish over earlier models, was no accident, and the association with Daystate (also owned by the parent company) was clearly paying off. It was of course the Compatto’s configuration that was really causing the stir. Where a ‘conventional’ Bullpup design sees the gun’s action sitting right to the back of the stock, the Compatto sets the action back around five- to six-inches; and it’s this compromise which gives this model an original feel.

The new Compatto Target model on test here, is a further development of the theme, and is aimed primarily at the Hunter Field Target shooter, since it comes pre-fitted with a Huma regulator. Externally, it resembles the standard model, save for the words ‘Target’ and ‘HUMA Regulated’, picked out in gold lettering on the scope rail. I was impressed with the original Compatto, so was keen to get my hands on the Target model, once I heard it was planned.

Huma are a Dutch company making specialist regulators for a selection of airguns. Their regs are available as after-market products and are well-known in airgunning circles, for their dedicated offerings, designed to improve consistency and performance. The regulator fitted to the Compatto Target is a precision assembly, manufactured from aircraft grade aluminium, aluminium-bronze, chrome moly steel, and precision Belleville springs, so quality is born in mind at every stage.

Fitting the Huma at the start is an interesting move, and a sign of the bold thinking that now lies at the heart of the Brocock.

Let’s remind ourselves of the specification on offer with this model, and then see how it shapes up on-test. The pre-charged pneumatic action features the Steve Harper designed and patented Slingshot anti-hammer bounce system, and this has been re-jigged to work with the Huma regulator. A 10 shot, bolt operated rotary magazine is also part of the spec, along with the quick fill probe style of charging, two stage semi-match trigger, synthetic soft-touch ambidextrous skeleton stock with adjustable buttpad, fully shrouded barrel, built-in manometer, threestage power adjuster, manual safety catch, threaded muzzle to take a silencer, and that reach-forward raised sight rail. A comprehensive design then!

Pick up the Compatto Target, and there’s an undeniable quality feel. The soft-touch stock is extremely well done, and of course the skeleton profile helps to shed unwanted weight where it isn’t needed; so, the Compatto Target, at 7lbs, is an extremely pointable gun. The stock is still slightly hollow sounding in places – mainly around the forend – yet the quality of the moulding and overall execution, overrides any minor criticism. Configuration is totally ambidextrous, incorporating a thinned down pistol grip, which allows for good trigger control. There’s an adjustable buttpad too, which allows height to be set by the individual, for enhanced eye/scope alignment, and with this sort of attention to detail becoming increasingly popular, the Compatto Target certainly ticks a lot of boxes!

Finish is impressive, with an ultra-matte anodised look to the full-length barrel shroud, scope rail, and breech block. The main cylinder gets a super gloss mirror finish, which isn’t conventional chemical bluing as far as I can tell, but it’s all very slickly done and all-importantly, feels durable.

With regards to the configuration overall, it should be noted that the Compatto Target doesn’t force the shooter to sight over the top of the action, as with full-blown bullpup designs, so the raised scope rail on offer here is used more as an extension of the scope rail to achieve the correct eye relief, rather than as a raiser block ‘intermount’.

Time to get ready, and the first task is to spend a while playing with the adjustable buttpad, until everything feels right, and sighting and shouldering the gun feels natural. Adjustment is easy, and done by slackening the large Allen bolt at the rear, which allows the pad to slide up or down on its axis. Set it with a small amount of resistance, adjustment will be easier. Make small adjustments over a few sessions, and when the head falls into place naturally on the stock, with no undue strain, it’s time to tighten the pad in place.

Charging this model is easy, and it’s via a push probe system. First, twist the valve cover at the front of the cylinder to expose the inlet valve, fully insert the filling adaptor, charge to 200bar fill pressure, then remove the probe and close the valve cover. Two points to make at this stagealways check that the probe is still fully inserted a short way into charging, and secondly, Best Fittings Quick Couplers make this a simple operation, especially when a variety of PCPs needs charging with different adaptors!

Next, we need to fill the magazine, and this brings me to an interesting point. In my opinion, an ideal competition rifle, aimed at HFT shooting is probably best served as single shot design. This ‘Target’badged Compatto comes with the standard model’s ten shot rotary magazine system, and whilst it looks well machined, there is still a little bit of play between the magazine and its housing in the breech block.

To load the mag, pull back the cocking bolt to the rear, pull the magazine out of its slot from the left side, drop pellets nose first into each chamber, gently seating them before rotating the spring-loaded drum each time. Once each chamber is full, slide the mag back into the breech, again from the left side and close the bolt. The first shot is now ready, and subsequent cycling of the bolt will cock the hammer and index the next shot each time.

Handling-wise, it’s worth mentioning that I have large hands, yet the stock felt spoton, and I didn’t end up holding the bottle! Yes, the fore-end looks compact, but if the dimensions work for my large frame, then I reckon most will be more than happy!

My test gun came supplied by Brocock directly, and came fitted with an MTC Viper Pro scope, which needed zeroing initially. At this point, I was relaxed enough to appreciate the subtle two stage trigger, and with a nice broad blade, and relatively light crisp release, it’s a real asset. The full-length barrel shroud obviously mutes muzzle crack, but adding a secondary silencer, (easily screwed onto the standard half inch UNF thread at the muzzle, makes a dramatic difference.

Okay, it’s time to properly assess performance, and any gun intended for competition needs to be capable of some serious grouping. 35-yards seemed a good starting point to push the Compatto Target, and I soon learnt the importance of adopting a positive bolt action when cocking, as the system will allow the magazine to revolve, yet not cock the hammer, if you’re overly gentle. This obviously isn’t ideal, but it’s still common in this style of multi-shot PCP. Don’t be timid, and all should function correctly.

Brocock have pedigree, and my initial results were pretty good, but an honest assessment has to note the occasional flyer, that ruined some otherwise really good groups. This isn’t a problem I experienced when I tested the original standard Compatto at its launch, so a replacement magazine was requested from the factory. The replacement did the same. Results so far saw Webley Accupells manage a little under ¾-inch and Air Arms Diabolo Field and Sovereigns around the half inch mark on and off- a level of accuracy that would please in most circumstances, but occasional flyers with such a quality gun were still a cause for concern.

Hold on though… with sufficient clearance around the breech block, I soon realised that single loading was on the cards, and with the magazine put to one side, I did just that! Flyers were instantly eliminated, and groupings were nothing short of excellent. Daystate Rangemaster Sovereigns reduced to sub quarter inch c-t-c over 35-yards, and just a quarter inch c-t-c over 40-yards. Brilliant stuff, shot from a fully supported beanbag rest admittedly, but I’m testing the gun- not me! A single shot loader from Rowan Engineering was also utilised, and this returned the same top notch groupings for the record.

Now it was time for the chrono check. Interestingly, Brocock fit the Compatto models with a three-level power adjuster, and my test gun recorded the following: High power came in around 11.5ft/ lbs, medium 9.7ft/lbs, and low power around 6.6ft/lbs. For the record, these figures are a bit higher than the early Compatto I tested, but it’s a great feature, adding even greater versatility.

Time to gauge the effectiveness of the Huma regulator and, of course, having tested the original model, I would get a direct comparison. Over the chrono, using Air Arms Diabolo Field pellets, this Target model produced an ideal average velocity of 789fps, with a total variation of 16fps. Not quite single figures hinted at, but impressive consistency nonetheless. With regards to shot count, I reached 86, before velocities dropped dramatically- less than the factory claim admittedly, but a healthy figure nonetheless. So how does that compare?

Well, looking back at the shot statistics from my standard Compatto test, I managed 80 shots within 17fps with the standard slingshot valve, so a realistic assessment has to conclude that there has been very little discernible difference between the two guns I have tested. Leaving that technicality aside though, nothing takes away from the fact that this Compatto Target model shoots particularly well single loaded, and that for me is probably how I would shoot it.

It’s stating the obvious, but if a gun is suitable for competition, and all the demands in terms of accuracy and handling that that places upon a gun, then it should be well at home in the field, against live quarry, where our standard of shooting needs to be equally high. On that score, this model comes well equipped, and is a sound option for either task.

Truly superb accuracy and good consistency, to the point where I would definitely compete with it; that says it all, believe me!

Have an existing Compatto, and want to play with a reg? Well, for the record, Huma-Air regulators are not available from Brocock as a retro fit for existing models, but existing Compatto owners can contact HUMA directly, and get a special version of the regulator to fit.