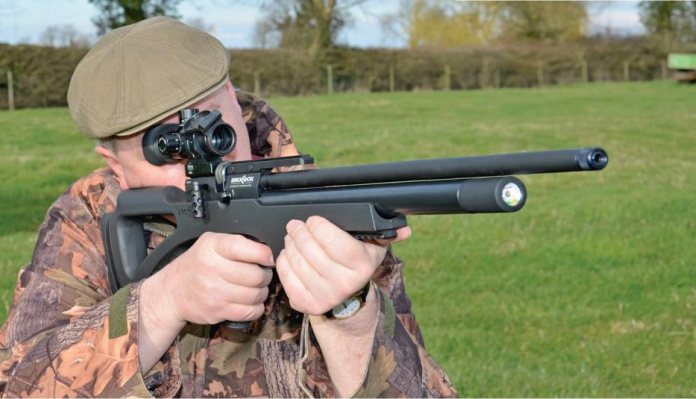 Brocock’s transformation from a quaint but slightly disjointed outfit, to the modern slick manufacturing operation that it is today, has been nothing short of remarkable. Of course, links with the Daystate brand have been hugely beneficial, and the dynamism and forwardthinking approach from the design team is there for all to see. Upgrades and brand new models have dragged the brand well and truly into a new era.

The Compatto model has proved a success for Brocock from the off, and its radical layout has been not only groundbreaking but unsurprisingly copied by a few rivals. Well, it is the sincerest form of flattery, as the saying goes. Their new range of XR-suffixed models includes two upgraded versions of the Compatto, and it comes down to personal choice. The airgun on test is the base model XR, and this comes with an unregulated action. For those who fancy another level of sophistication, there’s the Sniper XR, and this will come factory fitted with a Huma regulator for greater consistency.

So what was all the fuss about with the Compatto when it was originally launched? Well, for those who have failed to pay attention over the last few years, take a close look at its configuration, and it soon becomes clear that the action is set further back than normal. Unlike a full-blown bullpup, however, where the action sits right to the back of the stock, the Compatto takes a half measure. With the action moved between 5 and 6” back, is what’s best termed a ‘semi-bullpup’. Weight and the centre of balance are shifted further back, but subsequent handling isn’t quite so radical as the full measure.

Pick up this airgun and the solid feel and quality finish are immediately apparent. The skeleton profile helps shed unwanted weight where it isn’t needed and the synthetic moulding is pleasingly dense. The configuration is ambidextrous, incorporating a thinned down pistol grip which is a big aid to trigger technique. The forend is a little short for my long-armed reach in the aim, but an adjustable butt pad is a great feature, allowing for enhanced eye/scope alignment.

Finish wise, the matt black of the full-length barrel shroud, scope rail, and action all combine to good effect, with the main cylinder still toned down when compared to traditional glossy chemical bluing. All highly practical in a field rifle, and carried out to the standard we have come to expect from the new Brocock.

Unlike a full bullpup, the XR doesn’t require the shooter to be sighting up over the action, so the raised scope rail fitted just offers a usable extension in order to achieve the correct eye relief, rather than as an ‘intermount’style raiser block.

Fill pressure with this unregulated XR is 200bar, and this is via the probe system. Twist open the valve cover at the front of the cylinder, fully insert the filling adaptor probe, open the airline to the prescribed pressure, close it, then bleed the line. Remove the probe and close the valve cover. For safety, always remember to check the probe is fully inserted whilst charging.

Now to fill the 10-shot magazine. Pull back the Compatto’s side-lever and cock the action, then remove the mag from the left side. Drop pellets nose-first into each chamber in turn, gently seating them with a finger so they all sit flush, rotating the spring-loaded drum to view the next chamber. With each one filled, replace the mag into its slot in the action, and close the lever. The first shot is now indexed and ready. The ten shots can then be fired just as quickly as the lever can be operated.

Brocock fitted one of the new MTC SWAT Prismatic Atom scopes onto the test rifle, which is a radical optic that is shot with minimal eye relief. Pushing the rubber eyecup right against the eye socket is disconcerting at first and the sensation will prove an irritation for some. Truth be told, I couldn’t use one regularly as that startling ‘in yer face’ approach takes some getting used to. I can’t shoot MTC’s Connect either, despite it being super successful in competition, so each to his own as they say! What comes for free with the Atom, is, of course, a huge field of view, and I’m sure an army of shooters will just love this aspect.

On the right-hand side of the Compatto’s action, there’s a small dial with a progressive arrow showing. This is actually the power switch, and this clever feature will allow the user to instantly switch between three different power levels. HIGH power came in on test at an average of 11.3 ft/lbs, and it was on this setting that I ran the full chronograph check. Turning the dial to MEDIUM and the energy came in at around 9.5ft/lbs, while the LOW setting showed 4.3ft/lbs.

It may be stating the obvious, but it’s only when I inadvertently zeroed the gun on the lowest power setting that it dawned on me that the point of zero will be different at each power setting. Zeroing on low power, then shooting on high power sees the point of impact rise substantially. Zero on each setting and make a note of the respective scope settings for each and you have a fantastically versatile feature. Low power will obviously allow for a massive shot count, and if all you want is informal practise or fun shooting then this can be a really useful feature.

On test, using Daystate’s Rangemaster Sovereign pellets in .177, and set to full power, I recorded 104 shots from the 200bar fill pressure. I reckon a total velocity spread of 36 fps is impressive too, given that unregulated action. Experimentation with a lower fill pressure may well produce a tighter band of shots for competition use for example, and this is something I would play with if I invested in an XR. As it stands, there’s plenty of shots and scope to play with.

The Compatto formula throws up plenty of options and that starts with whether or not you fit a sound moderator onto the threaded muzzle. Easy to do, and achieved in seconds, but you will lose that super compact feel in the process. Muzzle report as standard isn’t harsh but a mod does dramatically mute what’s there.

There’s also the dilemma of single-shot or ten shot magazine, as a synthetic moulded single-shot tray is supplied with the airgun, which is an easy slide fit into the magazine housing. With the tray in place, you just need to roll a pellet across and close the side-lever to chamber the pellet. I’ve seen it before with a Compatto, and it has to be noted that on the test, whilst accuracy was perfectly acceptable with the magazine fitted, groups did slightly tighten when the single-shot tray was snapped into place. Using this method of loading, I easily managed 1/2” groups over 40 yards, which is pretty healthy in anyone’s book. It is, of course, the manner in which this rifle delivers the shot though that really impresses. Pulling back the brand new side lever and cycling the shot is refinement in motion, super smooth and about as good as it gets with this style of airgun. The design team deserve special praise for that super comfortable lever, and the re-jigged hammer internals.

The XR is a very enjoyable airgun to shoot, given the ultra-slick firing cycle and operation. For those who do fancy a ‘regged’ version, then the Sniper XR HR option is the road to go, factory fitted as mentioned, with a Huma regulator. The Dutch company manufacturers specialist regulators for a selection of airguns, and they have a big following online for their precision work. Their regs are available directly from them as aftermarket products and are designed to improve consistency and performance.