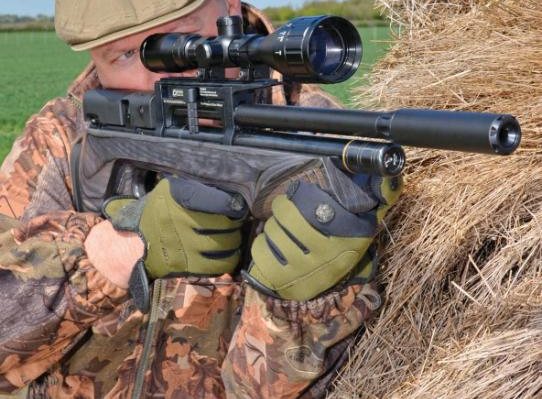 If you think about it, brand loyalty plays a big part in the fortunes of airgun companies. Get a product right, and inspire the customer, and they’re far more likely to return when a new, or more interesting, model surfaces. Indeed, I’ve known plenty of enthusiasts who hold a mini collection of airguns, some of which rarely see the light of day. Pride of ownership is often part of the equation, but an evolved affinity with certain manufacturers also plays a part.

History in the making

BSA are one such company that have the capacity to inspire, and whilst of course their rich history from the war years and beyond, have cemented a place in our psyche, their dynamic approach to airgun production in the last few years, has won them an army of new fans. They’ve rarely been slow in responding to market trends, even setting the pace in certain areas, yet the continuous rise of the bullpup style airgun, was starting to create an obvious gap in their product line-up.

My friend and colleague, Graham Allen, editor of Gun Mart, has long been a BSA fan, and a bullpup nut come to that, and apparently, his continuous badgering of BSA’s affable MD, Simon Moore, may have just done the trick. For this famous old brand has finally thrown their hat in the ring with the stylish new Defiant, on test here.

Pick up the Defiant, and what first hits you is the sheer compactness of the thing; but it’s no lightweight. 31-inches, full stretch, keeps everything neat, but this model still tips the scales at over 9lbs. Everything feels solidly engineered and robust, and bar part of the magazine casing, there’s not a shred of plastic in sight.

I can just imagine the design stage of the Defiant, with BSA’s draughtsman, engineers and marketing team mulling over various drawings, discussing the pros and cons, of what’s technically possible, and acceptable. The brief undoubtedly would have been to keep things highly functional, yet arrive at an acceptable profile, but all importantly, look different!

The Defiant is indeed a striking piece of design work, and the stock, whilst angular and minimalist, cleverly combines form and function. The neat stippled panels on the forend and pistol grip, look great, but also brilliantly aid grip. Excess wood has been trimmed, leaving that thinned out back support for the thumb-hole grip, adding real strength to the stock configuration. Including sling swivel studs ready and waiting, is a nice touch too, and one that will be appreciated by the hunting fraternity, that will undoubtedly invest in this newcomer. An adjustable buttpad is always a great feature, and here, the Wegu style pad is nicely concave, so it properly hugs the shoulder and anchors the gun in the aim. Just slacken the bolt at the rear of the butt, and the pad can be adjusted for height on its axis.

Looking to the action, the silencer and shroud are given a matt finish, which contrasts nicely with the traditionally chemically blued cylinder. The side-lever housing/intermount area all gets a matt finish too, and overall, finish and build feel up to BSA’s usual standards. The ECHF barrel is made in house by BSA and those initials stand for Enhanced Cold Hammer Forged.

Bullpups set the action right to the back of the stock, so we are then resting our cheek over the action. This means that the sight line needs to be raised further, to bridge the action and this is typically done using an ‘intermount’ configuration, as we see here with the Defiant. High mounts are preferable with this model, as is often the case with Bullpups, in order to get the sight line comfortably higher over the action, but personal physique will play a part here.

Charging the action is typical BSA, requiring the filling probe adaptor, (supplied) to be inserted into the front inlet valve, once the revolving cover has been twisted to open. Fill the Defiant to BSA’s usual stated fill pressure of 232-bar, and we are ready to go. Of course, the inclusion of a pressure gauge, or manometer if you will, is a great idea, and essential really with a PCP, to keep a proper check on residual power supply. But positioning it at the end of the cylinder, especially when the cylinder ends right near the forend, doesn’t seem right, somehow. Looking anywhere near up the barrel, to check the gauge, is unacceptable in my opinion, yet many manufacturers persist with this! It’s not just BSA of course! Stick it under the actionand the problem is solved.

Okay, rant over! Now, to fill the 10-shot magazine, and here just drop a pellet head first into each chamber in turn, twisting the drum each time until the spring-loaded mechanism makes the next available hole available. With the mag full, we can get started.

To insert the magazine, first pull back that smart side-lever, which is spring assisted by the way, all the way until the action is heard to cock; effort is minimal. Now, insert the mag from the left side, and here, the mag is felt to be pulled into its slot at the last minute, which is very neat, so I suspect BSA have inserted a small magnet inside the housing. With the mag in position, push the lever forward to the closed position, and the shot is loaded. Subsequent cocking of the side-lever cocks the action and indexes the next shot, and in use, the whole operation is incredibly smooth and satisfying.

One small negative, is that the shot count number on the mag is not easily visible when the mag is sitting within the action. My other minus point concerns the shortness of the forend. Admittedly, I have a large frame and a long reach, but when I mount the Defiant in the kneeling position, my leading support hand is gripping the cylinder end. All’s fine in the standing and prone positions however, but it’s an observation worth making, and I would extend that fore-end by 3-4-inches.

The soft touch cheekpiece feels really comfortable, and on the reverse of that sits the manual safety, for those who feel inclined to use one. Balance is almost bang on for the drop-down pistol grip, which will appeal to many, as will the compact design overall. From the kneeling position, I found the Defiant rock steady, yet standing, as with all bullpup designs I’ve shot to date, I find a real challenge, given the lack of weight at the muzzle. On the range, the Defiant seemed surprisingly noisy, but the firing cycle is pretty dead feeling, with little discernible movement. As for that slick side lever, it’s in exactly the right place, meaning that the Defiant can be easily cycled with the gun still in the shoulder – a key selling point in my book, with this style of airgun.

Trigger-wise, the bullpup configuration will always need a remote linkage, given how the trigger is moved from its usual position within the action. However, whilst a small amount of creep was detected with my test model, as supplied from the factory, it was quite pleasant in use.

BSA quote impressive shot count figures with the Defiant, so I was eager to run my test gun over the chronograph, and see how it shaped up. With .22 Air Arms Diabolo Field pellets, I clocked up 93 shots within 12fps, which is excellent consistency, and proof the regulated action was humming along nicely. I stopped with the red gauge marker sitting at around 100-bar, so the manufacturers claim of 120 would be close for sure. Let’s face, it 93 is plenty in any case.

Accuracy was on the money too, and from a rested position, I managed an initial ragged keyhole at 25-yards around a quarter inch c-t-c. Moving to 35-yards then 40-yards, I recorded 3/8-inch and half inch c-t-c respectively. Pretty text book stuff then, and proof that the Defiant can back up its looks with some hardcore performance where it matters. For the record, the side-lever action/multi-shot system didn’t put a foot wrong either, so a definite thumbs up on the technical side.

So, yes, BSA were rather late to the party, but having toyed with this long-awaited newcomer for a while now, I can honestly say I’m impressed. An army of enthusiasts are hooked on bullpups, and combine that with BSA’s loyal following, and the Defiant could be in for a bright future indeed.

Neat, ultra-compact, well finished, and highly capable just about sums it up, and if bullpups appeal, then the stylish Defiant has to be very high on any shortlist.

I obviously can’t take all the credit for BSA getting with the bullpup programme, as I’m sure that many others asked the company for one but I was rather persistent! I’m obviously delighted to see how the Defiant turned out and I now have one here to test and love it. I’ve also got an accessory for it that will no doubt be very popular and you can read about it I next month’s issue. In the meantime, enter our competition and you could win one of these fantastic PCPs curtesy of those nice people at BSA!