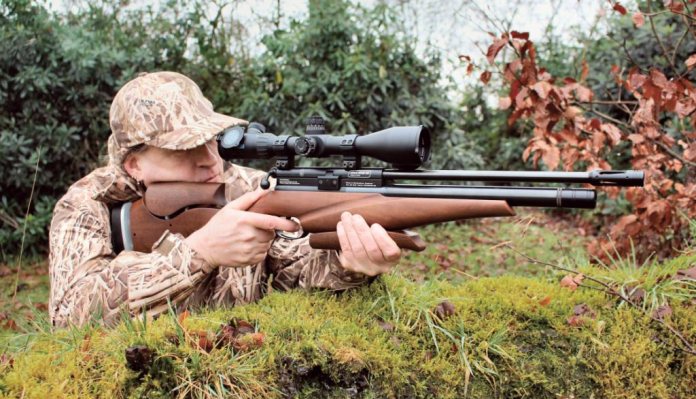 I’m sure many will agree that BSA have one of the most comprehensive ranges of both spring, gas-ram and PCP air rifles on the market. They’re certainly a company who refuse to rest on their laurels and in my opinion offer an air rifle to suit every taste and discipline. Well, it seems that the company has noticed room for one more; in particular, a rifle that would appeal to both hunter and dedicated HFT shooter alike. The rifle in question is the BSA Goldstar SE. A very cleverly designed ‘hybrid’ PCP that’s built to have a universal appeal. Available in three stock options of red/white/blue laminate, black pepper laminate and the walnut stocked model here on test; it’s an air rifle that certainly demands attention.

Obviously, the stock design is the most dominating and distinguishing feature and in my opinion the finest to grace any BSA air rifle, past or present. Manufactured by Minelli, they’ve got (pardon the pun) ‘all the angles covered’ due to the amount of adjustment this type of stock design caters for. And although the overall ‘look’ initially may appear to only tempt the target shooter, upon handling and adjusting the multi-function stock, it quickly becomes apparent that a lot of time and effort has gone into designing what is possibly the most impressive stock on a production air rifle this side of a custom or top line air rifle specifically manufactured for FT use.

The fully ambidextrous stock features a quite substantial height adjustable cheekpiece and a nicely curved sliding full rubber ‘extending’ butt pad. However, not content with ‘the norm’ the buttpad can also be adjusted outwards, as it’s attached to the rifle by two alloy pillars that allow the pad to extend, so that you can set the reach to pull from 14½-inches to approximately 15¼-inches. If that wasn’t ‘nifty’ enough, the butt pad can also be angled in (closer) or out (further) from the centreline of the rifle, so that you can attain perfect shoulder fit. Similarly, the alloy base of the cheekpiece allows you to not only adjust height, but to slightly ‘swivel’ it laterally over to either side, so that every conceivable alteration to the key areas for a comfortable head rest and full eye-scope alignment can be attained. You also can’t miss the generouslysized, nicely contoured palm rest (hamster) that can be lowered from the forend but also ‘shifted’ fore and aft depending on your preference. If, like me, you’re used to a more traditional sporter style forend, it can easily be removed from its alloy base plate, which then gives you a very slim, nicely rounded and tapered forward section, not dissimilar to the design of the company’s Scorpion SE.

All adjustments are allowed for by unscrewing discreetly positioned and well recessed Allen head screws, positioned in the right side of the woodwork. Even though I’m not used to using a ‘hamster’ as a forward hand hold, I must admit I did feel it’s worth setting it up flush to the stock and tight up against the front of the trigger guard. This gave me a chunky grip and gives the rifle a deep solid feel, at what is its natural point of balance when suitably scoped up. The steep drop down pistol grip has also been thoughtfully designed having a chunky fist-filling palm swell and the slim neck is complemented by the inclusion of a thumb shelf, so that you can adopt a thumb over, or thumbs up, hold. There’s little more I can say of the stock, other than twin panels of very fine, sharp stippling are set either side at the grip and overall the walnut had an understated but nicely configured underlying grain pattern.

The rifle’s charged via a Q/F probe inserted into the fill point at the front underside of the air reservoir, that is hidden by a rotating outer cover, just behind the large, forward-facing air gauge. From a recommended 232-bar fill, the rifle gives 75 shots in .177 calibre and 90 in .22, as per rifle on test. The very respectable shot count being aided by the fully regulated action, which also gives a very high level of shot to shot consistency.

The action is, by and large, the same base chassis as used for BSA’s other flagship PCP, the R-10 Mk2. That being a wellsized cocking bolt runs the latest up-graded (6th Generation) 10-shot self-actuating removable magazine. However, a single-shot adaptor is available for HFT use.

To cock and access the magazine for loading, the so called ‘Bolas’ bolt needs to be lifted up and pulled fully rearward. Then, the large serrated edge magazine retaining catch (positioned just forward of the action block on the left) is slid forward and the magazine can be lifted out of the left of the action.

The magazines have a colour-coded, high impact, polymer inner rotor. The colour denotes the different calibres – these being blue .177, and red for .22 calibre. Also at the top, where the rotor is exposed, you can clearly see the chambers are also numbered, so you can keep check on your ‘ammo store.’ It’s ridged on the outer edge for ease of use and indexes around very smoothly and positively. Pellets are slipped into each empty chamber through the hole in the side plate facing you as they appear when you manually rotate the inner ‘carrier’ anticlockwise, you carry on until all 10 are filled. Another ‘indicator’ of the ammo store, is a small, circular aperture towards the bottom left of the magazine face plate, which shows a white dot when you’re on your last shot.

The ‘Match Accurate Adjustable Trigger’ unit, which can be fine-tuned for even the most finicky of trigger tastes, is a very precise and top quality trigger mechanism. Adjustments include angle and height of shoe position, length and weight of pull, with adjustments having to be made with the action out of the stock. Praise also goes to the very practical, ideally sized, wellappointed manually operated safety lever positioned to the left top rear of the action block.

Now, an area of modification on the action is indicated by the ‘ECHF’ designation, pertaining to the barrel, which stands for ‘Enhanced Cold Hammer Forged.’ Here, I have to say, the company’s barrel making expertise is taken a step further, as all I know as an end-user of any BSA air rifle, is the usual Cold Hammer Forged barrels they manufacture are of a very high-quality, so for the Gold Star SE, I presume this is a ‘step above.’ As befits an air rifle that looks ready to hit the target lane, you can’t fail but notice the rifle comes supplied with an air stripper already spun up-front on the ½-inch UNF screw cut muzzle. As a hunter, this is good news, as it can be spun off and a can of choice fitted for sound suppression; target shooters can make use of what is a precisionmade unit, designed to allow the pellet to exit the barrel into a ‘still, un-turbulent atmosphere’, so it isn’t affected by the ‘after blast’ of air on discharge. Not being an authority on the workings of the air stripper, what I can say is that the BSA design is such that the distance the conical internal section sits away from the barrel, but still held within the skeletal outer framework, can be altered. Tweakers will have a field day with this alone; personally, I tested it as it came, dabbling with various cans but on the whole left the stubby ‘stripper’ be.

The action block has the now familiar uninterrupted flat receiver for scope fitting, making this one of the few multi-shot PCP air rifles where you don’t have to bridge over a protruding magazine, so you’re in no danger in having to struggle to fit almost any optic of choice. For the test, I used a Hawke Airmax 30 3-12x50SF, with AMX reticle set in suitably high mounts. Once I’d loosened, positioned re-tightened, loosened again, re-positioned again the various adjustable items on the woodwork, I finally had the rifle fitting like a glove, whereupon it became an absolute gem to handle and shoot. With a 30-yard set zero, I ‘chanced’ my arm out to 50-yards, shooting rested, and the rifle certainly out performed my ability, creating extremely impressive kill-zone groups, or to be precise, potential leader board c-c printed score cards.

BSA have managed to fill a niche in their PCP roster, that until now I personally didn’t notice was lacking but on reflection, the Gold Star SE speaks for itself and will endear itself to airgunners of all disciplines. Take the time to tailor the stock to fit you and you’ve got a rifle that almost feels custom fitted to your build and shooting style. It handles exceptionally well for a rifle with such a substantial looking stock, is very accurate, surprisingly light and is just at home on the target range punching paper, as it is in the field against live quarry.