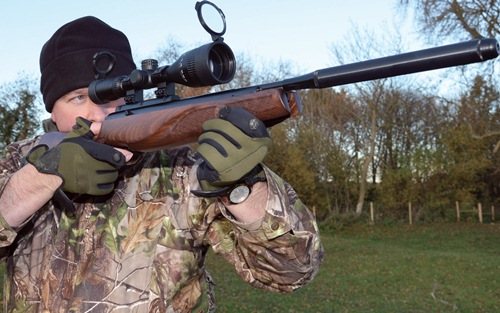 BSA have made quite an effort to revamp their product range in the last couple of years, and the current line-up of rifles, both pre-charged and the more traditional spring powered variety, reflect the company’s forward looking approach. Several models now feature gas-ram technology too, giving this famous old brand further appeal in an increasingly competitive market.

On test here is the GRT Lightning XL SE, and with a rather tasty Italian-made stock fitted as standard, it’s definitely designed to grab the eye. A closer look, though, soon reveals that these guns are about so much more than fancy styling; so we’ll first work through the spec sheet, then see how it shapes up down range.

GRT denotes Gas Ram Technology, and that sees the traditional mainspring scrapped and a gas strut installed in its place. Cock the rifle and you are actually compressing a sealed chamber of Nitrogen. As the action is fired, the gas rapidly expands, driving the piston forwards to compress the air and power the pellet in the normal way. It’s clever stuff, and with the original Theoben patents now expired, few manufacturers are resisting the temptation to jump on the bandwagon and bring out their own version.

So why go gas-ram? Well, in theory, with no mainspring to resonate and wear out, the firing cycle should be smoother and sweeter all round. Having shot several gas-ram models from a wide variety of manufacturers, though, I’m well-aware that increased subtlety and sophistication doesn’t automatically follow.

‘Sleek yet compact’ is a good description of this model, with that carbine barrel housed within a full-length shroud/ moderator. All the metalwork is well-finished, with the main compression cylinder and barrel chemical blued to a good standard. The moderator has a subtle matt finish too, which is, of course, highly practical in the field. Plastic is used for the cylinder end cap and trigger blade, yet since they are both well-shaped and finished, neither look out of place, or detract from the overall feeling of quality.

As for the furniture, BSA deserve much credit for not only the quality of the wood used for the beech stock, but for that superb configuration. Minelli produce these stocks in Italy, and their domination of the higher-end airgun scene is testament to their standard of workmanship. The Italian manufacturer wins many contracts by virtue of their capacity for high unit volumes, yet no one can deny that their quality is well up to scratch.

In the case of this GRT Lightning, the contours cleverly mirror that of BSA’s own flagship R10 PCP, and with the signature ‘flared wave’ passing through the forend, a tasteful profile is assured. Mouth-watering it may be, but handling is also enhanced by such features, and with a generous thumb shelf set to the rear of a well-proportioned pistol grip, this GRT Lightning can boast ergonomic credentials, despite being fully ambidextrous. In short, this is one of the best factory sporter stocks currently available, which is a good start.

Fitting a scope is a stress-free experience, since BSA fit this model with a raised scope rail that’s fit for purpose. 10mm of extra height are afforded, which may or may not be of use, but the rail itself is nicely machined and finished.

Break the barrel open and complete the cocking stroke and the super-refined feel immediately becomes apparent. In fact, my test rifle was easily as smooth in operation as Theoben’s original design; and that, believe me, is praise indeed. An articulated cocking linkage helps the cause, but the slick mechanics can’t fail to impress. Cocking a gas-ram, for those unfamiliar, sees progressive resistance on the downwards stroke, yet technique, including a positive ‘all-in-one’ sweeping motion, really does minimise effort required overall.

BSA have recently upgraded the trigger mechanism featured on this model, and with a super-light first stage, and a nice broad blade helping to spread the load, a precise and perfectly predictable final release is the result. For the record, the safety catch, positioned on the right-hand side of the action, is manually operated, and the GRT can’t be de-cocked.

As for the firing cycle itself, this gas-ram GRT simply blows its spring powered cousin out of the water. To be honest, I’ve never been a great fan of the standard Lightning XL, finding it fairly harsh and a little too lively in the shoulder compared to many of its rivals. The GRT is a completely different animal, being fairly quiet, super-slick and delivering minimal recoil. The gas-ram makes for an incredibly fast lock time too, which is the Holy Grail for some.

Of course an honest appraisal has to acknowledge the slightly low energy levels recorded on test, and at 9ft/lbs this particular model is a bit underpowered. But the famous old adage stands – namely that power isn’t everything, and it is quite simply nothing without accuracy. On that latter score, this GRT Lightning didn’t disappoint.

In fact, in the course of my testing, I had one of those marvellous moments when you just can’t quite believe how good the results are. Walking towards the target to check the group, I still felt some shots may have missed their mark altogether, until it became clear that the first five shot group I had produced with this model had torn a single ragged hole that could literally support the .22 pellet!

On a negative note, it should be said that the moderator did work slightly loose during my tests, but after a quick checkover with an Allen key it stayed tight thereafter.

The fact that the moderator can be easily removed is a handy feature, mind you, especially when bad weather has resulted in an ingress of water. Being able to thoroughly dry out components always helps in the battle against rust.

As for my thoughts overall, having no resonance and spring twang to contend with can make for a more subtle shooting experience, and here this rifle scores. As mentioned, I’ve shot several gas-ram models from a variety of manufacturers and few have shaped up as impressively as this BSA. It’s no cheap option, but for a great-handling, slick- shooting sporter, boasting a self-contained power source, this GRT Lightning XL SE just has to be up for consideration.