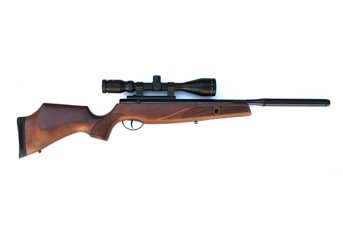 It’s no secret I love the BSA Lightning design, I have a well used and abused .25 XL Tactical which shoots on the money every time and refuses to die despite my abuse. It’s a tried and tested design and is just as ‘at home’ plinking in the garden as it is irradiating rats from around the farm yard and toppling hooded crows in Scotland. Also the price is right, it’s accurate, easy to cock and consistent with the proper choice of pellets. The new version i.e. XL SE has had a makeover regarding stock design, here tested in beech wood, and its actually made a good rifle great in my view.

As a no nonsense springer that anyone can use and rely on it’s a great looking rifle in a very practical but up to date sporter trim. The stock has been revamped with some great styling and you still have the integral silencer and Maxi grip scope mounts as standard.

Action wise the spring piston design is pretty conventional but the overall stroke and cocking is smooth without any faltering, but BSA offer a really good scope mounting system as standard. The Maxi grip rail that gives a full 6 inches of dovetailed grip for your scope mounting also has a built in recoil stud to stop excess rear movement of your scope mounts yet this rifle’s overall firing cycle is quick and smooth.  The barrel is only 10 inches long and is cold hammered with a rifling twist of 1 in 19 inches with the muzzle properly crowned - which makes such a difference. This achieves optimum accuracy although it is all covered by the integral sound moderator. This is over 11 inches long and 1inch in diameter and covers most of the barrel and cannot be taken off. This has two functions; 1/ the large interior certainly mutes any muzzle report well, and 2/ it makes cocking the Lightning very easy.

To cock you just sharply tap the moderator opening up the breech and then complete the stroke with a smooth action until the trigger sear is engaged. Pop in a pellet into the barrel and close up again and you are away, simple. It’s a tight seal and consistently delivers power and accuracy as one would expect.

The woodwork is just what you want from a sporter stock, looks great and better still handles really well, adding confidence so you can achieve some impressive groups on targets.

Beech wood is used and has a matt lacquer finish with the typical ventilated all black rubber recoil pad. What is different is the more scalloped form of the XLSE that has a high comb slant higher to the rear which incorporates a sweeping cheekpiece to both sides. This enables an almost ambidextrous field use, even if you are right handed as sometimes you need to take a shot from the other shoulder so as not to reveal yourself. The forend too is elegant with a tapered and recessed portion adorned with twin cut skip line checkering, duplicated on the pistol grip but in one larger single panel with a nice thumb rest also. Oddly though the sling swivel studs are repositioned the rear one is still on the butt but the front stud now resides on the underneath of the forend and not on the silencer shroud. Personally I prefer it on the silencer, it’s in the way on the stock and makes the rifle sit high on the shoulder.

The plastic tipped safety is situated on the left and rear of the receiver. It is manual in operation and in its forward position the rifle is ready to fire and in its back position the XL is safe. It’s a simple arrangement that works fine and easily accessible even in the dark when lamping.

The trigger is adjustable and of two stage design, i.e. there is a small take up of the first stage before the trigger pressure is reached. Set at the factory the trigger was a 4.5pounds with a small amount of creep but breaks cleanly.  You can adjust this with the Allen keys provided with the rifle but I left it ‘as is’.

The trigger guard is a slow looping band of steel which is a bit tight when you have gloves on but looks really nice and works well.

The XL was not at all pellet fussy and a nice smooth shooting rifle to use with the silencer really muting down any muzzle report but did prefer the more domed pellet designs.

Muzzle velocity wise was nice and consistent with four pellets standing out in particular, the Accupell, Air Arms Fields, Bisley Superfields and FTT. But the two former proved to be the best accuracy at 30 yards. The Accupells shooting 595fps and 11.2ft/lbs energy shot 0.65 inch groups at 30 yards. The FTT shot 0.75 inch groups for five pellets with a velocity 584fps and 11.4 ft/lbs. Although the Superfields had a healthy velocity of 581fps and 11.3ft/lbs energy accuracy was poor at 1.25 inches so a no go in this rifle. The Air Arms Fields are bang on 11.0 ft/lbs and 557fps shot 0.75 inch groups but in truth any of these pellets would be a good hunting choice dependent on your own preference.

The Lightning’s size, weight and really good handling characteristics makes it a ‘get the job done’ sort of rifle but with the latest stock you can still admire its looks also.

Great rifle for the price honestly, what more do you want, those Accupells, Lazapells, Air Arms Fields or FTT pellets were on the money with velocity and energy with less than 10-15fps variation on the A A Fields and Accupells, which is amazing on a springer. The action is smooth but there was a little twang from the spring even after the run in period, but what the heck it shoots so well. That slim line integral sound moderator muffles the muzzle report to nothing except the pellet striking your quarry.

I would change the front sling swivel stud position but really this is a great first, second or seasoned air rifle hunters rifle and best of all the price at around £323 is very good.