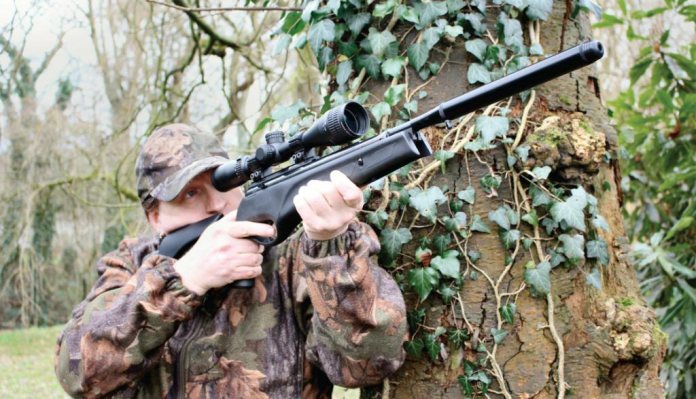 Relatively recently BSA up-graded virtually all the air rifles and gave them an ‘SE’ denotation. Some, such as the XLT or as it’s often known the ‘Tactical’ model of the Lightning also received these up-grades but in my opinion didn’t seem to be given the attention it deserved. Particularly when you consider the stock was altered quite dramatically.

As I’ve previously tested the XL Tactical before the ‘up-grade’ I not only felt it long overdue I tested the ‘XLT’ model but also give it the coverage it deserves before it’s ‘eventually’ superseded. That may sound strange but let me explain: As we moved into 2015, BSA informed me they’d eventually be changing this model offering it in a different stock design. Possibly by the time you read this, most likely at the IWA Trade Show in Germany its successor will have been shown to the public. However, the company also stated there was still good stocks (no pun intended) of this particular model and many retailers in particular will still have them on their racks. In that respect judge for yourself if you feel you should grab yourself one during this period of change.

Immediately noticeable is the High Impact Polymer stock has now forgone the original’s dedicated right hand roll over cheekpiece, to be replaced by a fully ambidextrous jobbie. This newly configured, relatively high and very well-defined cheekpiece finishes at the shoulder with a very generously sized ventilated black rubber butt pad. The neck is slim, while the steep drop down pistol grip is quite thick set. This palm swell giving the trigger hand a very good hold and by way of offering extra grip there are large raised ‘textured’ panels set either side of the ‘handle’ and three set either side of the forend. A generous thumb shelf is also incorporated into the design to allow for a ‘thumbs-up’ hold.

BSA have also proudly moulded in their ‘piled arms’ logo towards the base either side of the butt section and talking of moulding, the rifle now has a sling swivel stud ready fitted under the butt section to pair up with the one installed at the rear of the silencer at the forward section. The forend is relatively slim and tapers sharply upwards to end in a semi-Schnabel tip!

As this is a scope-only rifle, no prizes for guessing that BSA has retained the Maxi-Grip scope rail they fit to many mechanical action air rifles in their stable. That rail and rubber cushion design is kind on any optic but later, upon firing the XLT, it became obvious recoil isn’t an issue, so the raised nature of this ‘unit’ helps the action be suitable for both large and smaller objectives. However, as I feel a more general spec’ hunting optic to be the optimum companion to this rifle I opted for a Hawke Airmax 4 – 12 X 40AO in medium height mounts.

The cocking stroke was super smooth and made easy, as the full bodied yet relatively slim silencer makes for a handy cocking aid.

Once cocked you can clearly see the large, wedge-shaped detent lock and chunky breech seal that when closed lock everything up with a solid and secure feel.

The test rifle was in .22 calibre, so I set a sensible 25yd zero, even though in the right hands, the XLT is capable of kill-zone accuracy at ranges far exceeding that! But in most cases this is the sort of rifle where you’ll be taking on quarry at ranges from approximately 12 to 30yd. Accuracy proved most pleasing and from a stable rested position using H&N Field Target ammo I was soon able to print ragged ½” groups at my set zero.

Other features that impressed (besides the stock design) are the slim, full-length integral sound moderator and the responsive 2-stage, adjustable trigger. As for the former, it’s quite a dominating feature of the rifle, as it almost fully shrouds the 10” barrel and upon firing does a very fine job of taming muzzle report. If you need even more sound suppression, what initially appears to be the rounded muzzle of the silencer is in fact a removable end cap. Once unscrewed, it reveals a ½” UNF male thread, which of course will accept a wide variety of off the shelf ‘cans.’

However, do take into consideration the extra length a secondary moderator would add to the gun and in my opinion for the minimal amount of extra sound suppression one would give – you’ll equally lose out on the rifle’s inherent compact handling attributes.

The 2-stage adjustable trigger unit was originally and specifically designed for the XL series of springers and here on the XLT it gives the shooter a very high level of shot control. Straight from the box, a gentle squeeze of the nicely curved metal blade showed it breaks crisply and cleanly without a hint of creep. It also has a practical and user-friendly manual safety lever positioned above and to the right of the unit.

BSA has put a lot of time and effort in developing a very fine roster of air rifles, of which the Lightning XLT is a prime example. It handles superbly, has a super smooth cocking and firing cycle with a very low muzzle report, little recoil and is extremely accurate. With all those favourable attributes I’m sure many will agree that the ‘current’ BSA Lightning XLT is one of, if not the finest spring-powered air rifle BSA has produced to date. And no matter what we might see in the future, this is without doubt going to be a very hard act to follow.