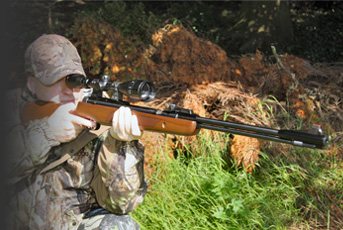 Their seems to be much ‘twitter’ on the airgun websites surrounding the origins of this rifle so the facts as I know them (and as stated by BSA) are as follows. Though in certain areas the Polaris bears some resemblance to a Turkish made rifle currently on the market it definitely isn’t the same. It has been manufactured by Gamo (Spain) for BSA and is based on the action of their CFX Royal. Input from BSA has come by way of trigger layout and other areas particularly the chunky muzzle shroud and to some extent the stock design. So here’s what I think.

It seems that both companies who’ve collaborated on this rifle have decided they have enough synthetic stocked models in their rosters and have opted to fit the action into a beech stock. The sporter design has familiar Gamo features, such as the soft lines of the nicely rounded, medium height cheekpiece, the familiar seven hole, black rubber butt pad and a full and relatively lengthy, forend. Two sets of generously-sized, fine-cut, chequering panels adorn the pistol grip and forend, and are particularly well positioned for the leading hand hold.

I Beg To Differ

Confusion over this gun’s true identity has in part arisen due to both the ‘cosmetics’ at the front of the under-lever and the rotary breech loading facility looking similar to other models. However, I can attest to the fact that having used both rifles they definitely do differ.

Sliding the ribbed retaining catch back on the Polaris brings with it the under-lever locking mechanism which isn’t a spigot, but a sear-type catch that locks up under the muzzle. The lever draws smoothly down and has a lengthy cocking stroke, locking securely back in the rearward position having travelled an arc of around 140º.

As many will realise for a full power springer this means the spring isn’t short or overly strong, and as I was soon to discover this does translate into a smooth firing cycle with low recoil. Before getting to that though, we need to get lead in the tube so to speak, and in the case of the Polaris this is achieved by manually sliding over the rotary breech from the right to the left using the serrated catch, thus revealing a deep cut, loading channel. With the breech open you direct load the pellet into the 18.5” barrel and close the cover back to its original position. All’s now cocked, loaded and sealed, and you now need only deliver the payload.

For this you’ve two aiming options, either use the Tru-Glo open sights or fit an optic to the raised ‘dovetailed’ rail which is fixed to the cylinder. It can be removed but it’s been added to serve the purpose of raising the sight line, so you can mount a larger objective optic - this is because the open sights are quite high due to the muzzle configuration, but more of that later.

As you’d expect the open sights are now the familiar front red insert in the blade and the fully adjustable rear unit with green fibre optic bars flanking the U-notch. These give fast target acquisition for close to medium range hunting or plinking. However in my opinion this rifle deserves to be out in the field doing what it’s capable of.

Scoping up with a BSA 4 – 12 X 50AO Essencial in high mounts I set zero for 25-yds with the .22 calibre test rifle and began to really appreciate what it was built for. That’s knocking over legal airgun quarry at sensible distances.

I’d set it up on the target range and made enough sub 1-inch groups out to 30-yds using quality ammo to be sure one shot was all I’d need once I’d spotted a coney within range.

Accuracy is certainly helped by the 2-stage adjustable trigger unit which has the familiar BSA layout of a manual safety lever positioned on the right of the action above the metal trigger blade. Unlike other BSA rifle’s that use this layout, there are no F&S (fire & safe) markings to indicate the status of the safety. But like others of its type in the rearward position the Polaris is set to SAFE while pushing the lever forwards puts it in FIRE mode.

The Polaris balances well and feels solid in the hold thanks to the stock material and design even though specified at 6.6lbs un-scoped it feels rather heavier than expected. It isn’t in the slightest cumbersome even though this full length sporter measures 44.25” from butt to muzzle.

That nicely brings me around to the next bonus; as the muzzle is very reminiscent of the discontinued BSA Goldstar in the fact that it has an outer sleeve that’s internally threaded to accept a silencer adaptor. Though it comes with a thread protector cap ready screwed into it, BSA have thought of the fact that potential punters will want to make use of the facility and supply an adaptor that screws in and then gives a male ½” UNF thread for fitting a silencer of choice. I used the rifle both with and without silencers fitted and quite frankly didn’t feel the need to use a can, due to the low report and recoil - the added weight isn’t even needed to combat muzzle flip. So in my opinion why add extra length?

Personally I’m glad I got the chance to test and hunt with the BSA Polaris because it has allowed me to clear up the confusion and misconceptions surrounding it. It’s also made me realise that it’s a sporter worth serious consideration if this type of air rifle appeals to you. Due to the balance, accuracy and overall performance I for one hope that this isn’t a model that gets overlooked – it’s certainly capable of putting a few bunnies in the pot.

We Reckon:
Good working under-lever
Simple and efficient
Not unlike others of its style