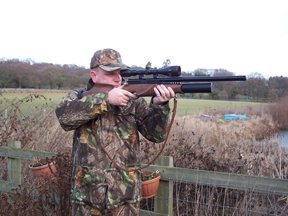 The BSA SuperTEN pre-charged pneumatic (PCP) has been around since 1996, and was a good seller from the start. Early versions sported a semi-target stock, which although functional, was never going to win any beauty contests. Subsequent models had much improved woodwork and the Mk III was especially pleasing. The action remained the same though, after all; if it ain’t broke, don’t try and fix it! The 200cc buddy bottle provided plenty of shots in sub 12ft/lb format, and an impressive shot count at FAC levels too; this was due to the John Bowkett designed regulator (he has been a design consultant for BSA ever since). This relationship has been fruitful over the years, and the collaboration resulted in other PCPs - the Hornet, Spitfire, Ultra and Scorpion. When it was felt that the SuperTEN could do with a revamp, it was decided to go the whole hog and design something completely new instead.

The R10 keeps a couple of SuperTEN features - the tried and tested hammer-forged barrel and the 200cc buddy bottle/air reservoir. The bolt-action mechanism from the Scorpion is the starting point of the design with its slick, bolas bolt effortlessly feeding pellets from the rotary, 10-shot magazine.

John Bowkett’s new regulator is the heart of the action; metering air into a separate firing chamber. Repositioning the reg lower makes the overall length of the action shorter, so bringing the weight backwards and thereby improving balance. In tests, the regulator proved consistent, which is obviously essential for the long-term reliability. The fill status can be monitored by an on-board, pressure gauge positioned in the bottom of the action. The buddy bottle is charged in situ using a probe that simply plugs into the port in front of the gauge. Charging a PCP doesn’t get much simpler than this!

The 12” tube sits in a full-length shroud and gives the R10 a pleasing, bull barrel appearance. Internal baffles make it a primary sound moderator; however the end cap can be removed to reveal a ½” UNF thread, allowing the fitting of a secondary moderator. Thanks to its regulator the R10 is frugal with air and is quiet enough for most hunting situations, but with BSA’s VC silencer in place, it gets really quite.

The trigger is an uprated version of the one fitted to BSA’s other PCPs, with a fully adjustable blade, so if you can’t get it in the right place, it’s your fault! The unit came factory-set for a very nice break, but you can tweak it to your heart’s desire should you wish. The release was just right for me, so I just got on with the shooting.

The safety catch is identical to the Scorpions which is positioned on the right of the action, below the bolt. This is not ideal, as the bolt’s ball can obstruct access. So this new R10 re-positioned it on the left making it much easier to use as it can be operated by the firing hand thumb.

You may be wondering what the black anodised device below the barrel does; well, nothing really, it just fills a gap! The serrations may look a bit like the back of Rambo’s knife, and I’m sure this little detail will be a like it or loathe it feature, even if it is a minor one.

The standard BSA magazine is used and is activated by the trigger mechanism; this ensures that the rifle cannot be double loaded. A ‘follow through’ as you pull the trigger trips the release mechanism, which rotates another pellet into position, ready for loading.

The latest version has an alloy pellet carrier for enhanced reliability, but there’s also another feed option. As a new single shot adaptor can be slipped into the well instead of the drum. It consists of two parts held together by the pivot pin. One section is held stationary by the magazine retaining pin that slides in from the front of the breechblock. The other is retained by a spring-loaded ball, and with the bolt withdrawn; the pellet carrier can be swung down to the left rather like opening a revolver cylinder.

A pellet is placed in the feed hole and the carrier returned, closing the bolt chambers the pellet. This operation is quick and easy and a real boon for those that might compete in FT or HFT, as a multi-shot magazine must be removed between lanes for safety reasons. The adaptor can be left in place and seen to be empty when it’s open. It’s quick and easy to use should you not want the hassle of filling the mg every 10-shots… They are expected to be an optional extra and cost around £30.

The prototype stock you see here isn’t quite the same as the production version, but the overall lines are. It’s the work of Jon Sykes (Hydro Graphics), who designed the synthetic furniture for the Scorpion T10 and XL Tactical, and he’s certainly worked his magic again. BSA staff also had an input and this collaboration has obviously worked. The elegant lines flow back from the tip, through the slim, yet hand-filling forend, and into the pistol grip in a very pleasing sequence.

The pistol grip has a generous scallop for a ‘thumb up’ hold, but it can obviously be held in the conventional way. The roll over cheek piece aligns the eye perfectly with the scope and the adjustable butt pad can be altered for that individual fit. Grade II walnut will be used for all R10s and I can see the woodwork alone bringing plenty of shooters to gunshops in search of this new BSA. Final versions will feature rosewood grip and forend caps, as well as panels of chequering on the forend and grip.

One thing that won’t be reaching the shops however, is the facility to carry two spare magazines in the underside of the butt. The recesses have strong magnets in them that hold the steel outer bodies ready for use. The downside is that the cut-outs compromise the sleek line, even though it was a handy feature. The mags could also potentially drop free if the stock was handled roughly, and it would be possible for grit to enter the clips in dusty conditions. I and other testers thought this feature was dropped, which it will be on production guns. I prefer to keep spare magazines in a pellet pouch around my neck, so probably wouldn’t use this facility even if it were fitted.

Proof of the Pudding

So how does the whole package come together? Very tasty indeed, as it handles extremely well and balances nicely, even with a pretty large scope fitted. At just under 7lbs (8 ¼ lb scoped), it’s not a chore to carry, especially if a sling is used with the fitted QD studs.

I used the rifle in all manner of positions; bench rested, off a bipod etc., and it proved to be an enjoyable experience every time I took it out. Foul weather and lack of quarry meant that only a solitary feral pigeon met its maker courtesy of the R10, but I still put a lot of pellets through it on the range. The action never missed a beat, whether I was using a magazine or the single shot adaptor, and other who tried it liked it too. Over the chrono, the regulated action spat pellets out with boringly consistency, and it didn’t mind what it was fed. Crosman Accupells were its preferred diet, but this might be different with other examples. Accuracy was as you’d expect from one of BSA’s excellent barrels, with tiny spinners hit time and again at 50 yards.

This new model should be in the shops by the time you read this, and it will undoubtedly be very popular in the years to come. At around £650 it’s very good value for money and I reckon it’s destined to join the ranks of classic BSA air rifles.