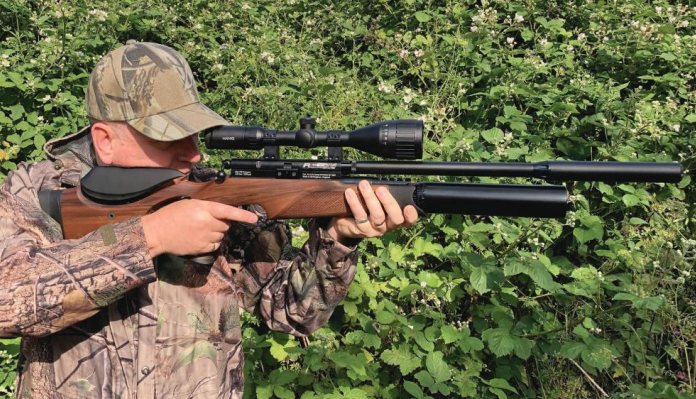 I first saw the subject of this review, the newly released BSA R-10 TH, at the British Shooting Show in February. It really is a lovely looking air rifle but before I get stuck in, I think it’s a good idea to take a step back in time to when the original R-10 was launched.

BSA’s flagship model was once the SuperTEN precharged pneumatic, launched in 1996; it used a 200cc buddy bottle and 10-shot rotary magazine and the action was regulated. It went through various upgrades over the years and the original, rather utilitarian, target-style stock was soon replaced with a fair more elegant affair in 1996, when a host of other improvements were made. A carbine model was thrown into the mix in 2003 and the model continued to sell well.

Over time, BSA realised that a replacement was needed to keep up with competitor’s rifles, so a programme was implemented to develop a new, multi-shot PCP to replace it and freshen up the range. The resultant model used the reliable breech and bolt from the Scorpion and an entirely new action, fitted into an extremely stylish Minelli-made stock. The original stock had cut-outs in the bottom of the butt, with room to house two spare 10-shot magazines but this was not carried forward to production models and the sculpted, handfilling sections on the forend were altered to flow the opposite way. Apart from these tweaks, the stock remained the same and was later available in Walnut, Realtree Xtra Camo, Black Tactical and ‘Black Pepper’ laminate. It’s fair to say that there were some issues with the original R-10s, but the factory soon addressed them all with the introduction of the R-10 Mk II. What also helped reliability, was the introduction of the new-style BSA 10-shot rotary magazine that no longer relied on the indexing pin that was part of the trigger mechanism. The new magazine was self-indexing, in that as soon as a pellet is fired and the bolt drawn back, the inner rotor turns under spring tension, to present the next shot; it has been a resounding success and is now used in all BSA multishot PCPs.

I’ve shot all the R-10 variants over the years and I have one here and it’s one of my ‘go-to’ air rifles when there’s pest control to carry out, or if I just fancy spending time on the range.

When I saw the latest version of the R-10 on the BSA stand at the BSS, it was love at first sight, as it has one of the most attractive stocks I’ve seen in years! We are really spoilt these days when it comes to the furniture fitted to air rifles, both spring and gas ram, as well as PCPs. A lot of this is thanks to the Italian company, Minelli, as they produce stunning designs and many UK companies now use their timberwork. The R-10 TH gets its name from the fact that the stock is a thumbhole (TH) and what a great job the BSA designers have come up with; the example I have here is in walnut but it is also available in Black Pepper laminate (which also looks great by the way!).

Starting at the front, which is just like the current R-10, there is a stylish, semi-Schnabel tip in contrasting black wood, complete with a thin spacer; the elegant forend still has the gentle ‘wave’ contour of the standard model and it’s a feature of several BSA stocks these day and gives sort of ‘family’ look to the range. The forend provides a perfect hand-filling hold and there are panels of chequering on both sides, as well as underneath. There are a couple of holes machined into the underside, one for the fill port and another for the air pressure gauge but more on those later.

The timber flows back towards the relatively upright grip, which, like the rest of the TH’s stock, is completely ambidextrous; some ‘ambi’ stocks are a bit of a compromise but this one is spot-on. The grip is capped in a similar way to the forend and there is chequering on both sides. The thumbhole itself is just the right size and there are also grooves either side for those who adopt the ‘thumb up’ grip; I think this would be a waste of a perfectly formed thumbhole however!

The stock continues back into the butt and there’s a black, soft touch wooden cheekpiece that is adjustable for perfect scope/ eye alignment via a single Allen bolt on the right. The cheekpiece and where is meets the timber is enhanced by a luxurious ‘scallop’ and the black colouring matches perfectly with the action, barrel, buddy bottle and forend and grip caps; it also works well with the adjustable rubber butt-pad. BSA have fitted a set of sling studs, which is a great idea, as many people want to fit a sling and many, like myself, also fit a lightweight bipod. All in all, a very, very nice stock!

That’s the rather lovely organic stuff out of the way; so, I’d better tell you all about the steel and alloy! Well, for a start, the R-10 TH has a 280cc buddy bottle in place of the 200cc version of previous models and maybe I can claim the credit for this, as I mentioned it quite a while ago to BSA’s Jon Hatton. I pointed out that 280cc bottles are the same diameter as the smaller capacity versions and are just longer, so a perfect, instant upgrade and considerably more volume of course. Others may have mentioned it of course but I do like to think that I had a little influence in the decision to use one!

The action itself is the same as the existing model but the regulator must have been given a once over, as the performance figures are quite astonishing, but I’ll get to that later on. Regulators not only improve shot to shot consistency but they can actually make accuracy more consistent over a charge as well, as the pulse of air behind the pellet is the same each time, so that the pellet is more uniformly deformed by the blast of air, compared to an unregulated PCP. The differences may be minute but every little help, as they say. The adjustable, two-stage trigger is said to have had an upgrade, but I must admit I couldn’t actually tell what the difference was, as the trigger seemed sweet enough but as I didn’t adjust it maybe I was missing the finer points? The blade position is also adjustable for position. The safely is on the left, above the trigger and it’s pushed back for SAFE and forward for Fire.

The ‘Bolas’ bolt is now coated black, as opposed to the old shiny version and this seems to be even slicker than older models. The magazine is still the reliable 10-rounder and the ones with the rifle have red inner rotors, as it’s in 22; .177 rifles have blue. Loading is really simple; you just drop pellets into the waiting chambers as you turn the inner wheel against spring tension and it’s the pellet itself that stops it rotating until a shot is taken. The mags are retained in the action by the standard BSA catch on the left side of the action.

BSA make their own barrels on cold hammer forging machines and the R-10 TH’s .22 calibre 15-inch tube is no exception. As standard, the rifle comes with a black anodised barrel shroud with the silencer fitted to the end but this rifle has an adaptor so that the silencer can be screwed onto the ½-inch UNF thread at the muzzle; a small threaded cover screws onto the alloy fitting that the shroud had been fitted to, to tidy things up a treat. I like the look of it sheathed and bareback, so I guess beauty is in the eye of the beholder.

The R-10 TH uses the same type of filler probe as most of the company’s PCPs and it is inserted into the charging port in the underside of the forend; a slow release of 232-bar is easy to do the twin O-rings seal the connection. BSA now supply a handy filler port plug, which stops anything untoward getting injected into the air reservoir. I’m always very careful with any rifle I’m using and I’ve managed to keep anything nasty out of all my PCPs over the years but this is real belt and braces stuff. My dive cylinder only had 200-bar in it, which was very annoying, but it was all had to work with, so that’s what the rifle was fed.

I used various pellets but settled on the H&N Field Target Trophy at 14.6-grains, as they seemed to work very well. Over the chrono I was getting absolutely amazing consistency, with nearly every shot being around 584-feet per second (around 11ft/lbs) plus or minus 2- or 3fps; this is better than many Field Target rifles! I ended up getting over 260 shots before the pressure went down to about 50-bar, so the maker’s claim of this rifle producing up to 340 shots per fill in .22 seems to be about right.

When I first shot this fine rifle, accuracy was slightly disappointing with a few fliers, but many rifles need a bedding in period initially and a quick clean with a pull through and a few hundred shots sorted things nicely and I was soon getting little fingernail sized groups at 30-yards! On my first trip to the range I fired more than a whole tin of pellets, probably around 650 in all, so I was more than enjoying myself! Shooting this rifle was very pleasurable, with a slick bolt action and general quality feel; the stock is simply lovely!

BSA clearly know their way around an air rifle and produce some great guns; I predict that the R-10 TH will be very popular indeed, as it is a very attractive product that provides excellent results!