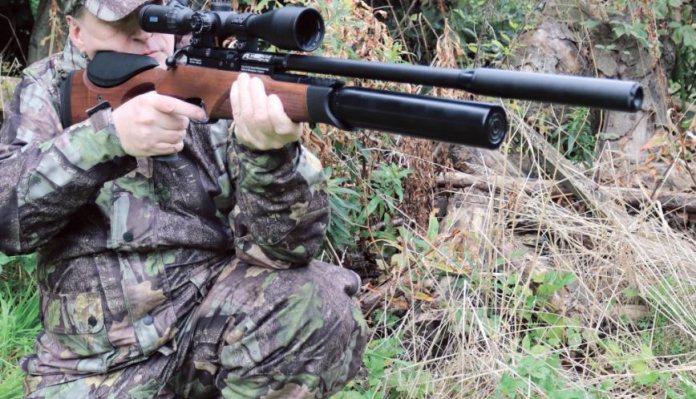 Doesn’t time fly? Because although it’s hard to believe, the rifle here featured represents and celebrates the fact that the BSA R-10 has been a model on the company roster of PCP air rifles for 10 years. During that time, it has undergone many changes and design modifications plus there’s been special edition models such as the Ltd Edition Firefly. So, to mark the decade BSA have decided to launch a model dressed in what can be described as very trendy and superbly configured thumbhole furniture. And as the handle you hold is one of the most important features of any rifle then it’s here, I begin my scrutiny of what on initial inspection is already a very cosmetically appealing rifle.

This superbly finished and crafted Minelli manufactured ambidextrous thumbhole walnut stock boasts a height adjustable cheekpiece, with a multi-adjustable full black rubber buttpad. The former feature is actually ‘Soft Touch’ being made of wood with a rubber over mould and the latter fixture offers the ability to be both offset at an angle as well as being height adjustable due to the full rubber shoulder pad.

These combine to allow the shooter to fine-tune the rifle to achieve correct eye-scope head scope alignment and to attain a nigh on perfect shoulder fit.

Although the stock is quite chunky and thickset for most of its length, the neck is sensibly trimmed resulting in it being relatively slim. The steep dropdown pistol grip angles swiftly down and then, at the very base, curves very stylishly out, plus it has a noticeable palm swell. This not only looks unique and quite sexy but also in use actually does aid your hold at the grip. To finish the rifle cosmetically, there’s what appears to be a rosewood end cap with maple spacer complemented by another at the front. The wellproportioned forend it ‘caps’ off is ideally sized for the action, quite deep with a slight forward taper which follows through to the stylish elongated Schnabel tip. Panels of very well-cut chequering adorn the sides of the grip, forend and even cover the majority of the underside.

Sling swivel studs have been pre-fitted at the factory and are ideally positioned so even when you’re not using a sling (or bipod attached under the forend) they don’t hinder or affect your leading hand hold.

The removable/fixed buddy bottle has now been upped to 280cc capacity but as you’d expect is still charged via the rifle’s neat inlet valve port found on the underside of the stock and a fill is easily injected in using the company’s familiar and supplied safety damped quick fill probe. A recommended fill pressure of 232-bar gives 280 full power shots in .177 and 340 in .22 calibre as per rifle on test. This is due to the rifle not only being able to store and use a larger volume of compressed air because of the large air tank but also due to the up-graded air regulator. And as many might know, the latter unit is a unique design due to it being positioned at the very front of the action block so it can be easily accessed and removed or replaced for servicing and/or maintenance.

A button size air gauge with a stylish black background and colour highlighted pressure settings is deeply recessed into the underside of the stock for checking the status of air in the on-board buddy bottle. This design of gauge is an easy to read unit and one that BSA seem to now have settled on fitting to most of their PCP rifles.

The R-10 TH of course uses the now heavily upgraded self actuating10-shot removable magazine familiar to all BSA’s multi-shot PCPs. Though I’ve mentioned these upgrades in the past, no harm quickly checking through them as every feature on the magazine is beneficial.

They have a colour-coded high-impact polymer inner rotor which has a serrated edge for ease of use and is numbered. The colour denotes calibre with blue being .177, red .22 calibre. Also, there’s a small aperture hole that shows as a white dot in the faceplate to indicate you’re on the last shot and a neat useful finger groove in the back plate makes for ease of removal of this very smooth and prices operating unit

The generously sized ‘blacked’ Bolas bolt is ideally positioned at the rear of the action block and after turning the bolt up from its closed position it slides back very smoothly to lock back with a quiet but noticeable ‘snick’.

For magazine removal or fitting, after the bolt has been taken to the rearward position, you can then ‘unlock’ the magazine from its housing. This is done by sliding its large serrated edge retaining catch positioned on the front left of the action block. This then allows you to lift the magazine out from the left.

BSA know the importance of a rifle’s trigger mechanism and their acclaimed 2-stage semi-match grade adjustable trigger is one of the finer mech’s available. A straight post and shoe design it can be fine-tuned for even the most finicky of trigger tastes including angle of shoe position, length and weight of pull. It now also has what the company term ‘Enhanced Trigger Function’ for better shot control. It’s a superb and precise unit to use, and the manual safety lever positioned above and to the rear left side of the action block operates very positively.

Now we come to a feature of the rifle that since its inception and inclusion on the R-10 has proved itself to be a formidable suppression system. That being the full barrel shroud with a semiperma fix secondary moderator attached at the muzzle.

Termed CCS (Customer Configurable Shroud) this highly developed sleeve is a totally innovative design and has clearly visible vent holes that help to dissipate air that follows the pellet as it exits the barrel. At the front, the secondary unit takes over to further reduce report using a combination of internal baffles and spacers plus it also has vent holes in its design. As it comes set from the manufacturer, both combine to make for a remarkably efficient ‘report tamer’ because the rifle must surely now rank as one of the quietest production PCPs on the market. But there’s more, because as the name clearly implies the shroud and front silencer can be configured to suit customer preference. This takes the format of you being able to remove the secondary can, then the barrel shroud (thus exposing the Cold Hammer Forged Barrel) and then re-attaching the secondary silencer to the muzzle again using the adaptor supplied. It’s just a case of removing and resetting a few fixtures, but I highly recommend taking advantage of the combined performance of both units for the high level of sound reduction they’re capable of achieving together. Also worthy of note on this model is the shroud is slimmer than previously seen therefore helps to reduce weight somewhat.

I opted to fit a discontinued but reliable Hawke 3 - 12 x 50 SF IR onto the rifles uninterrupted run of scope rails and after setting a 30-yard zero, the .22 calibre test rifle soon showing its pedigree and performance, making ragged one-hole clusters at zero and pushing out to 45-yards ragged ½-inch groups quickly became the norm. The shot count is also very impressive as is shot to shot consistency – the latter of course due to the regulator precisely metering out air for each and every shot.

For the hunter the BSA R-10 TH is undoubtedly the flagship air rifle the company now offers and has all the qualities and features of the Mk2 SE model plus a superbly designed thumbhole multi-adjustable stock that makes good use of it. The stock really is impressive not only due to the level of adjustment it caters for but also the generous thumbhole combines with the design and style of the pistol grip to make for a very secure hold from which to steer the rifle and platform to address the trigger.

Now although the R-10 TH is quite lengthy, the balance and handling are such that they make it feel far shorter than it actually is. It’s also quite a substantial gun, not overly heavy and with a suitable optic on-board you can tailor the overall weight to suit your preference, but whatever you scope up you can be assured that it will always feel solid on aim.

The soft touch height adjust cheekpiece is a great addition for proper rifle fit and of course feels very comfortable when you rest your head against it. Inherent accuracy potential is up there with the best of them and the CCS silencer unit is one of the most efficient found on any PCP that uses a combination of suppressors.

Bettering any flagship rifle is never an easy task so It’d be a brave man who tried to make a guess at where BSA go from here. However, judging by the form the company are now on I’d say we can expect this particular manufacturer to always strive to impress, and that’s something they’ve once again achieved in the R-10 TH. In that respect I think congratulations are definitely more than due.