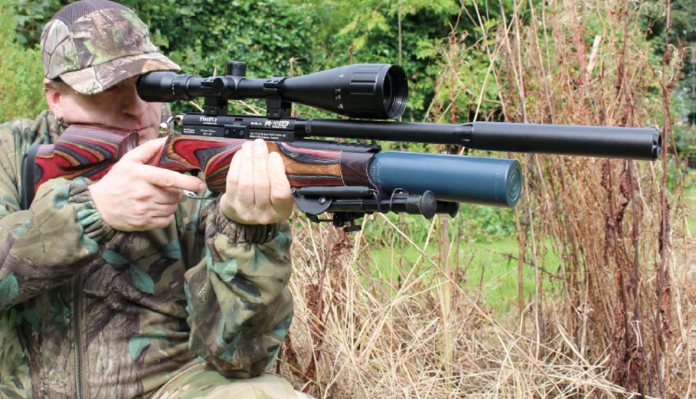 Limited Edition airguns are often launched to mark a rifle’s popularity and available from most good gunshops until the production run ‘limit’ set for that model is sold.

However, sometimes it might only be available through a few ‘select’ outlets, or as the case here – totally exclusive to just one specific retailer – in this instance it’s T & J. J McAvoy Guns. This shop has long been a premier retailer for BSA in the area – the gun manufacturer even nicknaming them ‘The Northern Powerhouse.’ This connection between the two is key to the rifle’s existence, because the FireFly is a collaboration between the shop and themselves; clearly acknowledged, as the rifle’s name is etched in white on the action block, accompanied with ‘By McAvoy Guns.’

Only 120 fully certificated models are available, including the option of Standard or Super Carbine format in either .177 or .22 calibre. It comes bundled with BSA’s Essential 6 – 24 x 50AO scope, 2-Piece double-screw Mounts, Deben 9-13-inch bipod, adjustable neoprene padded rifle sling plus 2x magazines and a tin of pellets of choice, all protected by a semi-rigid, Italian-made quality ABS rifle case. Certain ‘ancillary kit’ can be ‘altered’ to a customer’s personal preference on discussion with the retailer. A long winded but necessarily detailed introduction – so now onto the rifle itself.

It’d be fair to say that this is one of the most striking and unique ‘colour mix’ laminated stocks the company has ever offered. These range from different hues of red, brown, grey, black and in places tinges of yellow with a hint of black. This superbly finished and crafted amalgamation of plywood is ambidextrous, boasting a high, well-defined and substantial cheekpiece, fitted with a multi-adjustable full black rubber butt-pad. The latter fixture offers the ability to be off-set at an angle and the rear has a sliding, heightadjustable shoulder pad. These combine to allow the shooter to tailor the rifle for correct eye-scope alignment and to achieve a perfect shoulder fit.

Although the stock is chunky and thickset for most of its length, the neck is sensibly trimmed, resulting in it being relatively slim at the top rear section to the generously sized thumb shelf, yet the dropdown pistol grip swiftly angles down to show a noticeable palm swell. To finish the rifle cosmetically, there’s a red palisander wood end cap with maple spacer, complemented by another at the front. The forend is ideally sized for the action, being quite deep, with a slight forward taper, which follows through to the stylish, elongated Schnabel tip.

Stainless steel sling swivel studs are fitted and are positioned so that even when you’re not using a sling (or bipod attached under the forend) they don’t hinder or affect your hold. The 200cc buddy bottle is finished in a very attractive blue/grey – a very nice embellishment, which for on-rifle fills or ‘top ups’ there’s a neat inlet valve port on the underside of the stock, alongside which is an air gauge for keeping check of your air status.

Using the Quick Fill probe (supplied) a recommended fill pressure of 232-bar gives 190 full power shots in .177 and 250 in .22 calibre. The FireFly uses the now heavily up-graded, self-actuating 10-shot removable magazine familiar to all multishot PCPs on their roster. Though I’ve mentioned these up-grades in the past, there’s no harm quickly checking through them as every feature on the magazine is beneficial. These include a numbered and colour coded (identifying calibre) high-impact polymer inner rotor, last shot indicator and a neat useful finger groove in the back plate makes for ease of removal.

To cock and load, the large serrated edge magazine retaining catch (seen front left of the action block) needs to be slid forward; then, the generously sized, rear-mounted cocking bolt can be pulled fully rearward to prime the action and its pellet probe exits the magazine, which is now free to be lifted out from the left. Note the FireFly has a polished chrome bolt handle, which is matched up with a chrome trigger guard. A nice touch for those who like a modicum of bling, complementing the overall ‘luxury’ class look of the rifle.

BSA know the importance of a rifle’s trigger mechanism and rightly fit a suitable class of unit that’s fully in keeping with the model. In this case, it’s their acclaimed 2-stage semi-match grade adjustable trigger. A blade and ‘shoe’ design that can be fine-tuned for even the most finicky of trigger tastes, including angle of shoe position, length and weight of pull. It now also has what the company term ETF (Enhanced Trigger Function) for better shot control. It’s a superb and ‘precise’ unit to use, including the very positive operation of the manual safety lever positioned above and to the rear of the action block.

Now we come to a feature that has certainly been modified and one you can’t fail to notice – this being the full barrel shroud, with a secondary moderator attached at the muzzle. Now, I wasn’t overly impressed with the shroud when I tested a standard-length R-10 Mk2, but that certainly isn’t the case here. Termed CCS (Customer Configurable Shroud) this highly developed ‘sleeve’ is a totally innovative design and uses clearly visible vent holes to help dissipate air that follows a pellet when fired. At the front, the secondary unit takes over to further reduce report, using a combination of internal baffles, spacers and vents.

As it comes set from the manufacturer, both combine to make for a remarkably efficient ‘report tamer’, because without doubt, this is one of the quietest, carbine-sized PCPs on the market. However, as the name suggests, the shroud and front silencer can be configured to suit your preference. Meaning it can be removed to expose the cold hammer-forged barrel and the secondary mod’ then re-attached at the muzzle with an adaptor. It’s just a case of removing and resetting a few fixtures, but I highly recommend taking advantage of the combined performance of both units for full sound suppression.

Already affixed on the rifle’s uninterrupted railed receiver, was the BSA scope included in the package. After setting a 30- yard zero, the .177 calibre test rifle soon showed its pedigree and performance, with ragged, one-hole clusters at zero, and pushing out to 40-yards ‘off the bipod’ ½-inch groups were the norm. The shot count was also very impressive, due to the up-graded regulator, precisely metering out the air and ensuring you have a very high level of shot to shot consistency.

This is a very tempting offer, especially for a limited-edition rifle that’s available in such small numbers. The cosmetics may well be a major deciding factor but let’s not forget the BSA R-10 SE FireFly LE surely must be one of, if not the, most special PCPs BSA has ever produced and in this ‘ready to go’ combo format, one that some will find very hard to resist!

As for function in the field, the rifle is quite frankly one of the best new models of hunter PCP I’ve used for quite some time. It handles perfectly, is impressively accurate and features a combination of sound suppression units that are hard to beat. Even with the ‘combo’ included relatively large optic on board (or I should say lengthy) plus bipod attached, it doesn’t feel front heavy.

Due to the number of units manufactured, it’ll quickly be in short supply, so if it’s the type of rifle that gets you ‘fired’ up, I recommend you act quickly before they all ‘fly’ out of The Northern Powerhouse doors.