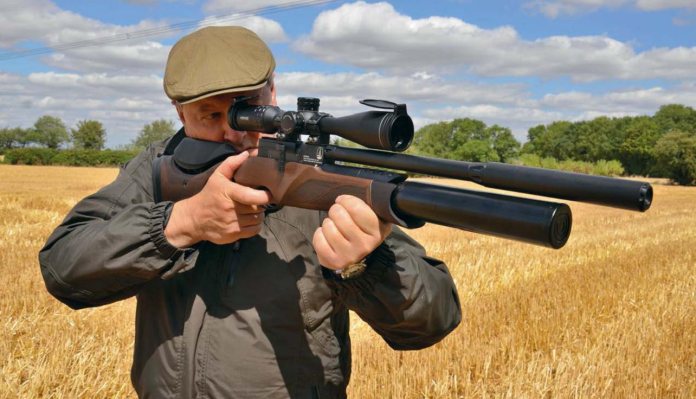 When BSA launched their new Ultra CLX model back in 2021, it signalled a seismic shift in BSA’s approach to engineering. New prototyping processes and facilities, and specially designed automated testing equipment ( all new models get 50000 shots through them!) was installed. All to great fanfare. At the heart of the Ultra CLX lay the new CNC-machined receiver, referred to by BSA as their ‘monoblock platform’, with the idea being that future models would incorporate this layout, requiring fewer components and utilizing higher grade materials.

Well here we are again, another new model, and I don’t mind admitting I’m just as excited.

The BSA R12 CLX Pro Carbine is a handsome beast and OK, I can already hear rumblings that it looks very familiar, and undoubtedly, the side profile isn’t a million miles away from the company’s R10- TH. Well, let’s look a little closer and see just what’s on offer here, with what will become the new flagship model for BSA.

Two key points here. Firstly, there are apparently only six remaining components from the R10. Secondly, the familiar flowing lines are intended to be a slow evolution and comfortingly familiar to any BSA fan who wishes to invest in a seriously upgraded product but still wants the gun to look and feel like a Beeza. Personally, I can see the point, but possibly think it looks a bit too ‘samey’ and could do with some visual markers that make the R12 stand out as radically different. That is of course a basic observation, and close inspection does indeed reveal major revisions.

For a start, we have slick side-lever operation, and whilst I understand there’s a fervent movement of BSA fans that are liable to glue themselves to the factory gates in opposition to such a radical change, I reckon this has to be the way to go folks. I can appreciate that the Bolas bolt was a thing of beauty for sure, but the sheer functionality afforded by the side-lever makes operating the R12 an easy, civilized experience.

The R12 CLX Pro’s PCP action is regulated, and the regulator is itself all new. The latest receiver is beautifully machined and finished, plus is visually a vast improvement over the old one. There we go, two new features to start.

The Customer Configurable Shroud (CCS) is still here. As it comes, the silencer screws into the shroud, which in turn, fixes to the receiver. Just undo the Allen key at the receiver end, where there’s new porting, and the shroud should slide off. The silencer is then unscrewed and the additional collar is screwed onto the end, adapting to 1/2” UNF thread. The silencer can then be just screwed onto the muzzle, without the shroud. This does give a surprisingly different look, and whilst removing or adding the shroud may alter shooting characteristics slightly, the whole operation is more of a cosmetic exercise than anything. At the end of the day, the CCS system introduces an element of experimentation and fun, and on a basic level, it gives two guns in one if you just crave a visual change.

BSA introduced a new magazine with the Ultra CLX and that features here too. It’s an all-metal affair and looks and feels well made. It slots into the action and is pulled in via a small magnet, whilst the remaining number of shots is also displayed in the small window. How many shots? Clues in the name, with the R12 offering 12 rounds in either .177 or .22 calibre. Filling the mag is simple, with no pre-tensioning required. Just insert a pellet into each aperture, twisting the drum to the next hole in turn.

The new, simple but boldly-styled manual rocker safety catch, again lifted from the Ultra CLX, is here, plus it’s in the perfect position to be thumbed off when utilized. A red dot signifies ready to fire and it feels super positive in operation.

Charging the airgun is done using the probe-style adaptor supplied, and the filling pressure is actually 230bar, not the magic 232bar that BSA has prescribed for so long. Yes, I’m not sure why either. Anyhow, pressurizing the system couldn’t be simpler. Look under the forend and there’s the perfectly positioned manometer. Just in front of this, there’s the inlet valve, and we now get an incredibly neat, key-shaped magnetic dust cover that just needs prodding, dislodging and removing to access the valve. Fully insert the probe, charge the system, bleed the line and remove the airline. Finally, snap the valve cover back into position and we’re good to go.

Minelli manufactures the stocks for BSA and my test gun came fitted with the matte-finished Walnut, which I have to say, I find particularly tasteful. Differences here over the TH model? Well, look closely and instead of chequering, we get that progressive or graduated style of grip. It’s actually formed by a series of raised dots, and these are deeper and rougher at the top on the forend, then get flatter as the panel wraps around. Likewise, the pistol grip - deeper to the rear and almost flat in the front, under the hand. I know BSA is trying to be different, but I think it just looks pre-worn on a new gun! I’d prefer conventional chequering or full-on stippling. Either in preference to what we have here.

That said, the quality of the timber and finish still exudes style and class, despite my negative observations. That classic flared forend has now become synonymous with BSA and feels great into the bargain. The rosewood cap and subtle flowing lines feel very classy, and coupled with the adjustable cheek comb and butt pad, overall handling is hard to fault. A single Allen bolt controls the moving cheek. Likewise the butt pad, so adjustment is simple. Take the time to get the pressure point on the face just right, and a repeatable shooting position is all but guaranteed.

Rifles fed with an onboard buddy bottle invariably offer a sizeable shot count, and this BSA comes fitted with a 288cc bottle as standard. However, fancy fitting a larger 400cc bottle? Then you now can, courtesy of the larger opening at the front of the stock. It’s all about choice these days, and BSA appreciates that shooters have different tastes. With that in mind, the new R12 CLX Pro can also be purchased with a Black Pepper Laminate stock, and since I was sent one with the test gun, I can certainly vouch for it. A tasty option for sure.

BSA’s triggers are normally pretty respectable on their PCPs and the unit here trips quite cleanly. It’s a fully adjustable 2-stage design, plus with a match trigger shoe that can be rotated to create the angle of choice, the user is well catered for.

On the range, I found it made sense to ensure that pellets were fully seated in the magazine, and this is best done with the head of the next pellet, otherwise, some were causing friction in the mag. During chronograph testing, I did have a couple of shots where I had cocked the action but the magazine had not rotated to the next shot, so I fired air. BSA has now added a feature around the breech (lifted from the Ultra CLX) to show when the action has been cocked, and this displays a small red indicator showing the gun is live. Overall though, I would recommend adopting a positive cocking action when pulling back the side-lever, and just check that the shot counter window clicks over to the next number, then there shouldn’t be an issue.

In operation, I love the way the sidelever is spring assisted, so it flicks backwards automatically, completing two-thirds of its movement before the final pull is needed. The shape and feel are just spot on.

BSA claims 280 shots from the standard buddy bottle in .22 calibre, and their figures are normally conservative. I ran 9 magazines worth (108 shots) over the chronograph, to gauge the efficiency of the regulator, and the gun achieved a total spread of just 12 fps using BSA’s own Goldstar pellets straight from the tin. That’s superb.

As for accuracy, effortlessly blowing out the centres on a match card over 30 yards was a great start. Then, managing sub 1/2” clusters over 40 yards just told me what I suspected all along - this is a classy hunting machine that’s fit for purpose. Perhaps the best test of all was dropping into a kneeling position and taking on my ‘big 6’ knock-down practice rack, made by Nockover Targets, where at 30 yards, the incredible balance of the R12 made me feel I couldn’t miss.

Overall then, a cracking rifle that’s beautifully put together. Not perfect, but unlikely to disappoint.