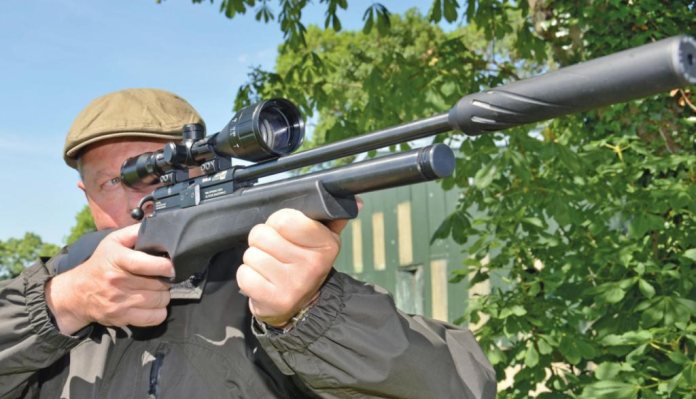 When BSA unveiled their brand new Ultra CLX a short while ago, it was obvious that their range of pneumatic models would receive some form of streamlining thereafter, to avoid too much product cross over, and what you see before you here is effectively part of that process.

The Scorpion SE models have proved extremely popular for BSA but where there was previously a selection of stock options, now this super-compact hunting machine is only available in the synthetic tactical stock we see here.

I’ve encountered this stock before on a different model a few years back and once you shoulder this Scorpion, that sublime piece of design work (courtesy of the late and much respected John Sykes of Hydrographics) instantly hits home. Yes, it’s aesthetically pleasing, with subtle curves and swirls, even an integral trigger guard, but function is at the forefront of the design. Where so many plastic fantastic stocks have a cheap feel, the density of the polymer used here, coupled with that textured finish, just demand a positive reaction.

It’s an ambidextrous configuration, yet somehow doesn’t feel like a compromise. The features include twin, pronounced, well-defined cheek pieces, a slimmed out, tapered forend with additional grip panels, sling swivels as standard and a rubber butt pad. But of course, the key element is that full 90° drop-down target grip. Here, a generous palm swell, finger grooves and that all-important thumb shelf combine perfectly. In short, in case you hadn’t realized, I likey!

OK, so we’ve established that the synthetics do their job nicely, so it’s time to peruse the features that the Scorpion SE format offers. BSA, of course, still produce their own barrels and the cold hammer forged specification commands respect worldwide. This comes factory fitted with a ported barrel diffuser and whilst any influence on the pellet is debatable, it certainly adds to the looks. There’s the familiar Bolas bolt, 10-shot magazine, manual safety catch, probe charging, manometer and adjustable 2-stage trigger.

To charge the action, first, remove the neat screw cap dust cover from the front valve, then insert the probe adaptor supplied. This is slightly unnerving as it doesn’t seem to push very far into the inlet, so it’s good practice to make sure it is still fully inserted a short while into the filling process. Pressurize to BSA’s usual 232bar, bleed the line and remove the probe.

Many will be familiar with BSA’s colour coded magazine system, with the inner section being either blue for .177, red for .22, or black for .25 calibre. There’s also a number indicating shots remaining and it’s all pretty neat in operation. Simply drop a pellet in each chamber, twisting anti-clockwise until full.

There’s full freedom when mounting a scope here, given the continuous length of dovetail rail. I bolted on the BSA Essential EMD 4-12X44 AO scope, as supplied from the factory. We’ll cover this model elsewhere, but suffice to say, it’s an astonishing piece of glass for the crazy asking price!

And so to the business end of the test. Pull back the Bolas bolt, slot the mag home into the left-hand side of the action, push forward the bolt (which automatically drops down into position), then pull back and lock the mag retaining catch. We’re now ready to go.

Squeezing the trigger reveals a pleasantly weighted unit that trips with minimal fuss. That said, a gun of this quality still deserves a better blade than the basic one offered here. I’ll keep saying it, but whether hunting or target shooting, a broader blade with a flat surface transforms the feel and spreads the pressure point, regardless of the mechanism behind it. As it stands, this Scorpion’s trigger is light enough for it to be a minor detail, so I’ll contain my whinging for now!

Cycling the mag proved slick and effective for the duration but with my initial testing conducted with the ported barrel diffuser in place, the din was hard to ignore. A fairly short barrel on a PCP creates a crack at the muzzle as the air rapidly expands, but given the diffuser is a 1/2” screw fit, simply unscrew it and spin a moderator onto the male thread. A dull muted ‘phut’ thereafter, proves the point, making a sound moderator an obvious addon for hunting at least.

From that specified fill pressure of 232bar, my test rifle produced 80 shots (I stopped at a residual 100bar), which is way over the manufactures claim of 65. That said, looking at the velocities slowly climbing as I noted the figures through the test, it’s obvious that filling to a lower pressure will find the ‘sweet spot’ and close the total spread considerably. Ignoring my first 10 shots, the spread narrowed from an overall 37 FPS, down to just 19 FPS. I used BSA’s new Goldstar pellets for the chrono test and they were pretty consistent overall.

Accuracy wise, with this test rifle originally supplied by BSA to evaluate their new pellet range (reviewed in the September issue of GM), I was left with the impression that, firstly, all four pellet types are indeed high grade, but also, that this slick little Scorpion SE is anything but pellet fussy. All the groups could be covered with a 5p piece, while the Goldstar and Silverstar clusters were sub 1/4”! Quite superb.

And so, after an extensive session with this stylish model, I was left with the impression that the popular Scorpion SE in Tactical synthetic configuration, remains a highly desirable, super-compact hunting machine, that can’t fail to impress the minute it hits the shoulder. Great handling is one thing but the on range performance well and truly back up its credentials.

At £669, it represents fair value for money too and whilst there are now a bewildering number of competitors all vying for our cash, with a hatful of features thrown in, few can rival the pedigree of the famous old Beeza brand.