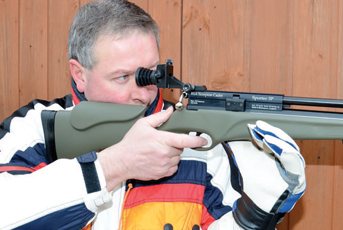 My first airgun club, East Barnet in Hertfordshire (circa 1980), was an indoor target set-up. The members were a thoroughly nice bunch; only too willing to share their knowledge and enthusiasm; and as a consequence, I just couldn’t wait for Sunday afternoons to come around, to get back down there with my Dad.

Airgun shooting took place over ten yards predominantly, from screened off individual shooting booths, and the rifles used were of the ‘target’ variety. Learning the ropes in such a semi regimented atmosphere is no bad thing, and the discipline and safety instilled at an early age, is an invaluable lesson for the shooting world in general.

10 Metre Indoor target shooting, the airgun discipline currently incorporated into the Olympics, is of course the aspiration for top shots that emerge from this style of club, but one of the biggest stumbling blocks in any budding gold medal winners career, has to be the prohibitive cost of many top flight target rifles. Around £2000 to £3000 is a significant investment for most shooters, but cheaper alternatives do exist, for anyone looking to get started.

The rifle on test here, is the special 10Metre version of the BSA Scorpion, being the Cadet Sporter 3P model; where 3P stands for 3 positional. BSA are of course an old household name, yet in recent years have moved much of the production to Spain – the home country of their parent company Gamo. The Scorpion is one model which is still made in good old Blighty, and this Cadet version certainly looks the part.

That distinctive profile stems from a fairly compact configuration, including a synthetic semi target stock, and those dedicated diopter target sights. BSA actually supply this rifle to the British Army Cadets, which by any measure, has to be seen as an impressive endorsement. An RRP sub £500 is an attractive proposition too, so let’s see how this model shapes up to the specific task asked of it.

Most eye catching of course, is that synthetic stock, and whilst my test rifle was supplied in the rather attractive Green, a Camo design is a further option. The configuration of the stock itself is identical to the black versions used by BSA on various ‘Tactical’ models of late, and all I can say is - handling is a joy!

A full ninety degree drop down target grip puts the trigger hand in exactly the right place, with all important trigger control properly promoted. Whilst this stock isn’t totally ambidextrous in a symmetrical sense, that fact is a pure technicality, since the moulded finger grooves are so subtle as to be non obtrusive to south paws. An integral trigger guard is all part of the precise moulding, as is a prominent cheek piece, and in use head alignment with the sight line felt just about perfect.

The flexible rubber butt pad is nicely concave too, meaning it properly hugs the shoulder in the aim, but the fact that it’s also adjustable at the twiddle of a central screw, is most welcome.

One curious feature is the one eyelet for a sling swivel, provided on the underside of the fore-end, with no corresponding provision at the butt end. On checking BSA’s instruction sheet, one photo showed the stock with one and another with two - so maybe something for the factory to address. Some consistency needed at least! Nit picking though, as overall, given that excellent fine roughened feel to the surface of the synthetics, these stocks just feel great.

Indoor target guns utilize Diopter sight systems, and BSA fit the Scorpion Cadet with their Gamo made units. These consist of a hooded foresight at the front, and the main diopter at the rear. Initially, the foresight assembly needs to be slid onto the small dovetail at the muzzle, which is a surprisingly fiddly job. Once in place though, it stays put. Interchangeable elements can be inserted by just unscrewing the collar of the hood in the time honoured fashion, to change the size of the circular element or post as desired.

The diopter system in general requires the shooter to look through a small aperture, (formed by a pin hole in a rubber eye piece). The aim is to view the target centrally within the foresight ring, and in turn keep this image central within the aperture. Practise of course makes perfect, and a surprising level of accuracy can be achieved from this seemingly basic sighting system. Remember though that top class Olympic shooters rarely miss a bulls eye, just half a millimetre across at 10metres, so there’s definitely technique involved!

These Cadet models can be supplied either as multi-shots, with a ten shot rotary magazine, or with a single shot adaptor. My test candidate came with the 10-shot mag, so first things first - time to chamber up.

To remove the magazine from the rifle’s action, the mag retaining button, just forward and to the left of the breech block, needs to be pushed forward. Then the bolt needs to be fully pulled back and the action cocked. The mag can now be pulled from its slot and a pellet pushed into each chamber in turn. Return the full magazine to its housing, push the bolt forwards, and engage the mag retainer. Job done!

Indoor 10m target shooting only requires low power, given the close distance, and to this end, BSA set these rifles to produce around 6ft/lbs. Basic physics dictates that low power needs less air, so a fill of 190bar will go correspondingly further. BSA’s literature claims 170 shots. However, on test, using Daystate Rangemaster Li pellets, this model posted 110 shots with a spread of 38fps, and a kinetic reading of 5.2ft/lbs, before velocities began to tail off markedly. Still plenty of shots though, and with the quick fill probe method of recharging on offer, topping up the air supply is a fast and easy.

One point to make at this stage is that the elongated shooting session did highlight the fact that a positive cocking action is advisable when cycling the bolt, to ensure that the hammer /action is cocked, and at the same time, the magazine has also been indexed. A couple of misfires, where just air was discharged occurred, followed by two pellets being chambered at once as a follow up. Stick to a deliberate cocking action, and this problem shouldn’t occur; yet I would still advise to opt for the single shot version in any case – especially if you intend to use the rifle for .

The standard two stage trigger unit from the full power Scorpion is utilized here, yet whilst the blade is a little two curved all round for my liking, I could hardly fault the super light first stage and ultra clean final release. OK; this is no top match unit, but consider the ultra sophistication of triggers fitted to those flagship Olympic grade target models, and its clear that this is one of the areas where savings can be made. Remember the realistic asking price of this Cadet, and I reckon its trigger has to score highly overall; being sensitive enough to reward good technique.

Setting up the Diopter sights revealed a surprisingly sensitive mechanism, allowing for fine adjustment. The initial zeroing process proved the ideal opportunity to explore this rifle’s raw accuracy potential too; and from a rest, over the prescribed 10metres, I recorded several ragged holes which could support a pellet!

A good start then. As for my efforts freehand, slightly more erratic - yet with patience and practise, several 5 pence piece sized groups emerged, proving the Cadet had what it takes - even if I didn’t!

The Scorpion Cadet comes very well appointed, coming as it does with all the features needed to tackle the indoor arena. Throw in some rugged good looks, and I reckon it makes a great gun for any newcomer to this demanding branch of our sport, who wishes to test the water without taking out a second mortgage. GM