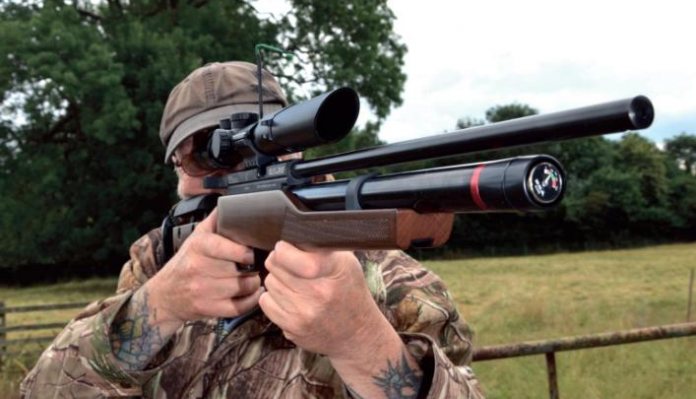 The British Shooting Show at the NEC, Birmingham, has become a real showcase for the industry, and I still get excited attending these events with friends, to savour all the best aspects of our great sport, under one…or rather, a complex of roofs. It has become customary to announce/ launch new models at these prestigious events, and BSA certainly went into overdrive at the last one, with something like eight new products, spanning their various brands including Gamo and Winchester.

I tend to do the rounds at these events, meet with industry folk, and generally soak up the atmosphere, and of course arranging review projects is all part of the deal. Yet one newcomer to BSA’s own range, announced as the Silver Star, didn’t fully register, and rather slipped under the radar so to speak. Yes, I clocked it on the stand, but BSA’s initial marketing seemed to suggest that this brand-new rifle was to be solely a low-powered, indoor target model. I test airguns right across the disciplines, but with my passion for outdoor competition unavoidably at the forefront, I placed the Silver Star on the mental back burner, without fully acknowledging just what was on offer!

So, to cut a long, padded intro short, here it is: the BSA Silver Star, and I have to say, considered from several different viewpoints, it really is something to get quite excited about.

Whether BSA had a change of heart, and switched emphasis, mid-project, I’m not sure, but what we now have, is a super compact PCP air rifle, with built-in versatility and a host of features, aimed at both, the indoor target shooter, and the HFT market. Okay, ‘all things to all people’, normally means the dreaded word ‘compromise’, but the clever part of the burgeoning spec sheet, comes with the way the Silver Star can be ordered, with either a 12ft/ lbs main cylinder, or one set to around 6ft/lbs. 12ft/lbs for HFT/FT work, and 6ft/lbs for indoor 10m target shooting.

In terms of build quality with the Silver Star, everything feels well-finished, with the matt black of the breech block contrasting nicely with the glossy chemical bluing of both the cylinder and barrel.

At £699, this model is pretty competitively priced, and an unregulated action helps keep costs down. Stock wise, there is a choice, of either the beech version, on show here with the contrasting cheek section, or a black stained beech version.

I like the slimmed down, angular forend, and with a neatly recessed accessory rail here, the addition of either a small bipod for indoor use, or an add-on adjustable Hamster/stock raiser for example, are all on the cards. The drop-down pistol grip is well shaped, and the deep cut chequering applied to both the forend and grip is an impressive detail that transforms handling.

The Silver Star has several ace cards to play, and that kicks off with a level of adjustability to satisfy serious shooters, looking for proper ‘gun fit’ among the plus points. Look on the rear right side of the stock, and there are three discs with Allen bolts. The top two can be slackened off, and the cheek piece can then be raised or lowered to suit. On my test gun, it was noted that as the cheek is raised, it actually leans slightly to the left as the bolts are tightened. It didn’t seem to affect my final comfort or stance, but it didn’t appear to be an intentional element of the design. Slacken the rear bolt, and the butt assembly can then be pulled out and extended by up to 3.5-inches, which means, all importantly, length of pull can be stretched, from 12-inches, right out to 15.5-inches. One final Allen bolt sits in the centre of the butt pad. Slacken this one, and the pad can be raised or lowered, again to suit the individual.

Stating the obvious, but what all this means is that, after a goodly twiddle with an Allen key, the Silver Star can be basically made to fit the shooter. Alter the length of pull, and both juniors and gentlemen such as myself, built like an orangutan, are immediately accommodated. Take the time to set the other elements until eye relief and a relaxed shooting position just fall into place naturally, and the task is complete.

Get past the fully tweakable woodwork, and the Silver Star’s next Ace card is of course the way the main cylinder is easily detachable – surely something of a first for BSA, as far as I’m aware. This means that customers who order this model in 12ft/lbs spec for example, could then order the low powered pre-set cylinder further down the line; and vice versa. A red anodized filler valve at the front denotes full power, whereas 6ft/lbs cylinders get silver. Switching cylinders is simplicity itself too, which makes the whole system so appealing. Just unscrew the cylinder at any time, and slide in the replacement, (sold as an optional extra). Nip it up hand tight, and you’re away. All importantly, charging to the prescribed 232-bar is done with the cylinder in place, so zero isn’t disturbed in any way. A quick fill probe adaptor comes with the rifle, and this is screwed onto the airline, be that pump or diver’s bottle, in the usual way.

To charge, just pull off the plastic valve cover, insert the probe, and slowly open the airline. In terms of best practise, I would always recommend checking that the probe is still fully inserted into the valve early in the charging routine, wait till the prescribed pressure is reached, bleed the line, and remove the probe.

Slide the dust cover back into place, and we’re done. That removable cylinder really makes sense in my book as a safety feature, and I would hope the industry will go down this route in the future, given that it allows for the pressurised vessel to be easily tested for integrity further down the line.

This model comes fitted with a two-stage semi match trigger, and whilst this is specified as a fully adjustable unit, I left it as delivered, since this felt reasonably light from the off. The blade can be rotated around its axis too, so angle can be altered for those who prefer an off-centre release.

Another new feature of the Silver Star, and something I think we’ll be seeing on other BSA Models, is that chunky metal ‘T’bar cocking bolt. It’s ambidextrous and doesn’t need to be twisted, instead relying on a straight-line pull. Cocking effort is reasonable, with some resistance at the start, and the bolt can be felt to snap back into position at the end of its travel before the shot is taken, so all quite satisfying in use.

Currently only specified in .177, the Silver Star utilises BSA’s own much-vaunted Cold Hammer Forged barrels, and with the barrel totally free floating, it is the ideal configuration for competition shooting. For the record, I had both the full power and half power cylinders for the duration of my test, so as to get a proper feel for both set-ups. Order this model with the 6ft/lbs cylinder in place, and you also get BSA’s dioptre sight set, which includes the fully adjustable dioptre rear sight, and also a small foresight that clamps onto a dovetail, barrel adaptor also supplied.

Over the chronograph, I recorded almost identical energy figures of just under 5ft/lbs with a variety of pellets, including H&N Sniper Medium, and JSB Exact RS. With the dioptre sights all bolted in place, it was a quick job to zero the sights, via the two clearly marked finger wheels. Accuracy from a rest over 10-yards, was excellent, with a genuine single ragged hole the result. From a freestyle standing position, I managed fairly easy sub-half-inch clusters, and clearly technique is all that stands between any budding enthusiast and very creditable results. Expect around 175 shots in this mode.

Now it was time to spin the red banded full power cylinder into its thread. Purchase the Silver Star in this guise, and you also get the small barrel adaptor, which can accept the foresight at a later stage. Fixing a scope in place is simple enough here, since the Silver Star carries dovetail rails along the two ends of the breech block., and with an MTC Viper Connect in place, I was ready to hit the test facility. Back to the chronograph, and whilst BSA currently claim 85 shots from full power, apparently with heavy pellets, my testing was with a view to a super consistent band of useable shots for serious competition. From the 232- bar fill pressure, I managed 55 shots with 8.44-grain pellets, all within 15fps which is creditable consistency. Shooting 75 shots opened up the velocity to 47fps spread, but this is all from an un-regged action don’t forget. Admittedly the super consistent band of shots isn’t huge, but do your homework and realistically, there’s plenty to play with.

Power on test was a little low, equating to around 10ft/ lbs irrespective of ammo used. However, accuracy wise, groups of 3/8-inches over 40-yards proved a point for sure. Handling is impressive, and all the features come together nicely. Muzzle report is quite significant however, so personally, I would fit a silencer, which would also add front weight.

So, plenty of plus points then from this refreshingly versatile rifle. I really enjoyed my time with this new BSA, and it reminds me of the MPR, a now sadly discontinued model from Air Arms that catered for the competition shooter but kept things relatively simple. That’s praise indeed, believe me. Build up the stock via the accessory rail, add more to the barrel in terms of air stripper or silencer. The choice is yours, but the foundations for success are clearly here, at a price point that should appeal to many.

With thanks to Jake Miller for the kind loan of his rifle for this test, and BSA for the extras supplied.