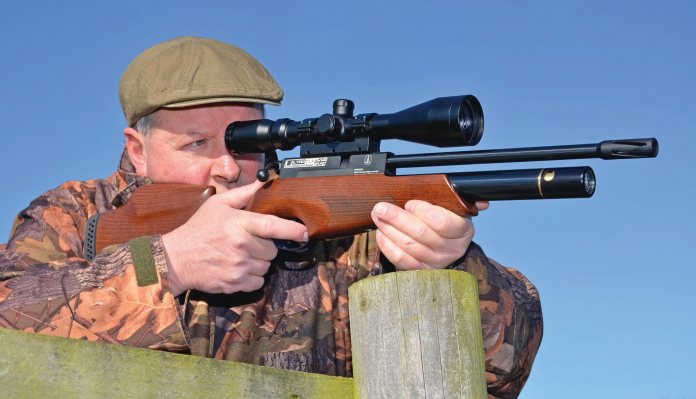 I still get excited about the launch of a new airgun, but when you’re sworn to secrecy by one of the household names in the industry, sweaty palms soon enter the equation. A sudden compulsion to spread the news with all and sundry defies logic, and even the lady on the Tesco checkout had a narrow escape - if only she knew.

Timing is everything with product launches, and so it is with this brand new model from BSA; timed to coincide with their 160th Anniversary. As one of the key companies supplying arms to the British Empire and beyond, and gun production spanning back to 1861, the company does indeed have an incredible history to celebrate.

Today’s BSA focuses solely on airguns, and whilst the factory no longer takes up the whole of Armoury road, it still sits on the ground of the old stock making facility.

So, the new model is the BSA Ultra CLX; a gun that for me, stirred a curious mix of emotions, all within a very short period of time.

Firstly, I have to admit to a small bit of disappointment at the realization that my obsession with competition hardware hadn’t been indulged, how rude of them! Secondly, on seeing the CLX, the brain is tricked into thinking it is a familiar BSA profile, so what’s new? This is an understandable, but massively misplaced assessment. What we are looking at is a seismic shift in BSA’s approach to engineering, and this model lays the foundations for future projects.

Close inspection reveals some seriously superior engineering, that frankly leaves their old kit in its wake. Let’s firstly dispel any assumptions that this is a tweaked Ultra, you’ve only got to pick the gun up to realise it’s not. The only components from the parts bin are the Bolas bolt handle and the trigger guard.

At the heart of the CLX is BSA’s ‘mono-block platform’, which is effectively an exercise in precision CNC engineering. We will be seeing a lot more of it, as it becomes the basis for the next generation of PCP models. It reduces the number of components and complexity, so should improve reliability. Subtle changes of direction and angles on the surface plates give an unusual and distinctive look, and the end result just instils confidence in what lies beneath.

BSA still produce their own cold hammer forged barrels and that’s what’s fitted here. When you consider how all the early PCP’s had to have super long barrels to generate the desired energy levels, the astonishingly short 12.4” barrel here is an achievement in itself.
The new muzzle break looks great, and according to BSA, it has been designed with airflow in mind, intended to aid the stability of the pellet as it exits the barrel. To fit a moderator, simply unscrew it and spin one on, courtesy of the ½” UNF thread.

The airgun is supplied with a probe charging system, and it’s certainly slick. The manometer is now bigger and clearer than what went before, but it really isn’t safe placing it in the front of the cylinder. A common fault in many PCP’s I appreciate.

To charge the gun, twist the metal collar round at the front of the cylinder until the open valve is exposed, then insert the probe and charge to 232bar. One observation here is that the probe doesn’t have to be pushed in far to be fully seated, which is a bit disconcerting, so keep an eye that it remains fully inserted early on in the charging process. Remove the probe and twist the valve cover to close.

The new 12-shot magazine has a precise feel, is of all-metal construction and features a small magnet to snugly locate it into the mag well. There’s also a shot count window on the facing side.

To fill it, hold it with the window towards you and drop pellets nosefirst into each chamber, twisting the inner drum anti-clockwise to expose each one in turn. When full, the counter should show 12. These mags are designed to be ‘anti-double load’, and I’ll come to that in a moment.

New features just keep on coming. The pellet probe is now manufactured from high-grade stainless steel, so there’s real robustness where it matters. Precision around the pellet and reduced wear all helps the cause, and it is little details such as this that really elevate the brand.

At the rear of the action, there’s now a rocker-style safety catch, which is similar in feel to a Daystate. It is in exactly the right place, falling to the thumb for an easy nudge off, and when in ‘live fire’ mode, the red dot shows. It’s nicely made and being manual, it doesn’t interrupt the proceedings unless needed.

Unsurprisingly, the tasty beech woodwork is produced in Italy by Minelli and despite the ambidextrous credentials, is a delicious piece of design work. Sling swivel studs come as standard, which is great given this model’s inevitable hunting duties.

The stock shows some snazzy, what I can only describe as ‘graduated chequering’. The panels are actually pin dots of varying sizes, and it’s definitely different. I still reckon the forend could be extended by a few inches though, and this wouldn’t increase the gun’s overall length.

The trigger is the best unit I have used on a BSA and is based around the R10 trigger. It’s a multi-adjustable design with a few additional features, allowing for trigger pull release, sear engagement, first stage weight, and position. The blade can be moved sideways, back and forth, plus the shoe can be turned on its axis. All in all, a comprehensive unit, and a contributory factor in overall performance.

Right, it’s time to see how BSA’s new baby shoots. Firstly, it should be made clear that this model isn’t technically regulated in the true sense of a mechanical valve system, instead, as per BSA, it works by ‘restricting the airflow through a series of valve seats, controlling the size of the transfer port to give a more precise amount of air when the hammer strikes the knock-open valve. It still gives a power curve but a lot less severe than most self-regulating guns’.

On test, over the chronograph, the manufacturer’s claim of ‘up to 50% increase in shot count over previous Ultra models’ from the 232bar fill pressure, was definitely born out, and I managed 60 shots. A total spread of 60 FPS was a little wide, but after checking the stats the total velocity spread reduced to a highly acceptable 35 FPS if you took the first 48 shots. As usual, experimentation with a lower fill and different pellets would pay dividends.

As mentioned earlier, the new magazine is designed to be ‘anti-double load’, and after some initial confusion from my side, I called the factory to clarify. Basically, if you pull back the bolt and cock the mechanism, and it sets the trigger and hammer as well as indexes the next shot in the magazine, you return the bolt, then at that point, forget if you cocked the gun, if you were to try to cock it again, it would not chamber another pellet. However, if you are less than positive in the way you pull back the bolt, it is still possible to index the next shot in the mag, yet not have actually cocked the trigger and hammer. In this scenario, further cocking would chamber a second pellet. The answer is to be positive in the cocking stroke and hear the action set.

Understandably, the Ultra CLX is pretty noisy, with a healthy muzzle crack from the short barrel and supplied muzzle brake. Accuracy wise, at 25 yards the rifle produced easy 1/4” clusters and at 40 yards, groups of just over 1/2” were possible. However, with a moderator fitted, I found rifle balance improved and the groups shrunk slightly to 3/8” clusters at the same distance. Impressive stuff for sure.

An energized team have maintained BSA’s position as a big player in the airgun marketplace over the last couple of decades. This new model and what it represents looks set to bolster the company’s status yet further. The build quality is the best yet from Beeza, and the format of this pint-sized beauty makes it a highly desirable airgun, capable of punching well above its weight. ‘Accuracy, precision and craftsmanship’ is the tag line from BSA, and in the case of this Ultra CLX, it’s difficult not to concur.

In short, a beautifully made, supercompact hunting rifle, designed, developed, and manufactured in Birmingham. The £609 price tag seems fair, but if you fancy something really special, then BSA is producing a limited production run of 200 ‘1st Edition’ models. These come complete with walnut stock, EMD 3-9X50WR scope, BSA silencer and a special compact hard case, all for £799. And that, I’m sure, is going to be one tasty sporter for the connoisseur!