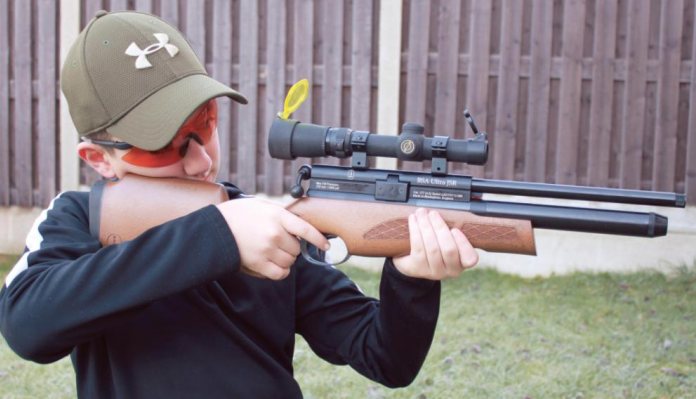 The BSA Ultra was an instant success and the junior version is a dedicated starter rifle built to the same exacting standards as BSA’s adult airguns. When you handle the Ultra, even the “normal” one, it’s not a big rifle. The JSR has a slightly shorter length of pull to accommodate the smaller frames of the younger shooter, with the distance from the trigger to the back of the stock at 290mm.

The main difference, apart from the stock, with the JSR is its power levels. They are set to 6ft/lbs. this is a deliberate choice from BSA. When starting new shooters out the range they shoot at must be limited, it’s counter-productive to get them shooting at 55-yard targets straight off the bat. It will only dishearten them when they are not knocking down targets at that range. The other added bonus to halving the power is that the shooter can focus on what the pellet is doing rather than what bangs and noises the gun is making. After shooting 12ft/lb PCP, putting pellets down range with the 6ft/lbs is a completely different experience. The end of the barrel is also threaded for ½ UNF and has a thread protector collar.

The rifle is filled via a probe fill, a really reliable and simple system. It has a dust cover that has to be removed first, this reveals the charging hole. Just stick the brass probe in and away you go. To check on your air usage the JSR as all modern Ultras has a pressure gauge under the action. Maximum fill pressure is 232-bar or 3365-PSI.

Over the chronograph the gun gave me 100 shots with 7.9 grain pellets and a 232-bar fill all at around 5.8ft/lbs. The 183mm long 11mm scope rail runs the full length of the action, it has a cut out on the right-hand side to insert the 10-shot magazine.

The JSR does not come with any sights fitted so some sort of optic will have to be attached. We all know how to load this type of rotary magazine. The BSA version is the white dot that appears on the bottom of the magazine to tell the shooter they have reached the last pellet. You can see this on the left-hand side of the action with a magazine inserted. The JSR comes in both .22 and .177, using BSA’s world famous hammer forged barrels accuracy is guaranteed, and I was not disappointed, it one holed at six-yards, if you love your back garden shooting the JSR is superb. You just don’t need a 12ft/lbs. air rifle in your back garden, with a moderator on the sound of your pellets hitting your targets will be the loudest thing anyone, including your neighbours, can hear.

The JSR has a manual safety catch on the left rear of the action flick it fully forward for the fire mode and back towards you for safe, F and S of course. As always, I’d encourage the use of the safety at all times, just flick onto safe after you have fired your last shot and of course before the first one.

The trigger weight is light and predictable at 0.5kg, adding to the JSR’s accuracy down range. As does BSA’s world-famous cold hammer forged barrel. Expect sub-20mm groups even in inexperienced hands at 25m.

It’s not a me-sized rifle, so, it was time to treat my 12-year-old son, George, to the experience of the BSA Ultra JSR. Generally, PCPs are lighter and easier to handle for younger shooters. But even a normal adult PCP is a bit much for junior shooters to handle safely unless sat down with the rifle supported on bean bags or rifle rests. Not so with the JSR; it was perfect for George. I fitted the JSR with one of my all-time favourite scopes, the Simmons Whitetail One to Five times magnification. It’s a small compact scope with a low magnification capability, ideal for back garden ranges. With our safe backstop set up and George’s kitted out in his EN-166 rated shooting glasses on, we were good to go. We only have eight-yards to go at in our back-yard, but it’s was ideal for having fun with a gun.

George immediately loved the JSR, the multi shot capacity was a massive favourite. Just being able to work the coking bolt and fire another shot left him grinning from ear to ear.

If the shooter outgrows the JSR you can purchase an adultsized synthetic stock from BSA to make it fit again. As a junior PCP I cannot recommend it enough, quality built to actually fit the smaller shooter and very, very accurate. In one word, superb.

My thanks to BSA and Jon for help in production of this article.