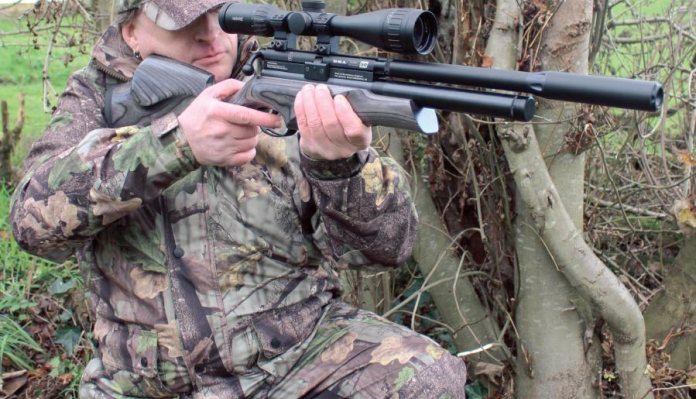 Since its inception, there’s no disputing the Ultra has been a steadfast and very popular selling PCP in BSA’s impressive roster. Obviously, over the years, it’s been up-graded but more so, when you consider the original it’s based on, its had far more mechanical modifications. I say this because even with a suitable silencer up-front, the standard Ultra SE is a use anywhere, anytime, cope with any situation you’re likely to face kind of rifle. Notice I included the word ‘standard’ previously, because if the extra three letter ‘CCS’ prefix added onto its name hasn’t caught your attention, then one glance at the gun surely will.

The ambidextrous laminate stock is a return to form for this rifle, as it’s the design that the Ultra was dressed in before it gained its SE denotation; and, if I’m not mistaken, there’s only the singleshot Ultra in a beech stock that still uses this superior design.

Needless to say, we’re looking at a very well-crafted and finished piece of woodwork. The ‘black pepper’ stock is stunning, having an overall charcoal grey coloured base, overlaid with many tinges of brown and flecks of darker charcoal, while the separate laminate bonds are highlighted by and seen as thin black abstract lines that follow the contours of certain features of the design but equally run in a very loose linear pattern. The result of this combines to almost mimic a very attractive ‘grain pattern’. However, this isn’t just a case of eye-candy, as the stock features a high, thick-set yet nicely contoured cheekpiece with a full black rubber buttpad.

Although the stock is quite chunky and thickset for most of its length, the neck is much slimmer and has a slight thumb channel that quickly widens out as it rises up to where the woodwork meets the rear of the action, to end in a small broad platform for your big digit to rest on. The steep, drop-down pistol grip will, for many, be at the perfect angle to afford the ideal base from which to slip the trigger, your grip helped by the generous palm swell.

The forend is in perfect proportion to the aft section and again uses contouring that enables it to not only sits comfortably and without fuss in your leading hand, but it has a ‘unique’ shape that feels natural in the hold. This is because, immediately upon leaving the metal trigger guard, the rounded undercarriage slightly flares out on both sides as it rises to a point, they form a noticeable thicker section with a rounded off, lipped edge. The profile also tapers slightly inwards at the sides plus has a stylish inward lower curve as it tapers quite quickly upwards, to where it curves down again slightly as it meets the stark angled back front tip.

The rifle uses the company’s now familiar fill probe, which is pushed into the inlet valve hidden under the air reservoir’s screw on front cover cap. A recommended fill of 232-bar gives approximately 40 full power shots in .177 and 50 in .22 (as per rifle on test). A neat air gauge is deeply recessed into the underside of the stock for keeping a check on the status of your air reserves.

As you’d expect, the rifle’s payload is held in BSA’s much modernised 10-shot removable magazine, which uses a calibre colour-coded, high-impact polymer inner rotor; it’s also numbered on the serrated outer edge. Blue is for .177 calibre rifles and red is .22.

To remove a magazine, you first need to pull the generously sized, balled ended blacked ‘Bolas’ cocking bolt fully rearward, then slide the serrated magazine retaining catch (positioned on the left at the very front of the breech block) forward. You can then lift the magazine out from the left of the action. A thoughtful inclusion is the finger groove close to the edge in the forward-facing section of the outer casing (back plate) which makes it easy to ‘grip’ with cold or gloved fingers. Another useful magazine feature addition is the inclusion of a small circular aperture towards the bottom left of the face plate – it’s positioned to be seen when the magazine is in the action and a white dot appears, indicating that you’re on your last shot.

The magazine operates much more smoothly now than previous designs ever did, but filling it is as eassy and the same as it’s always been. This operation requires you to manually rotate the inner exposed rotor, thumbing a pellet into each chamber as it comes around, pellets going into them through a loading hole in the faceplate. Once all 10-chambers are filled, you simply place it back into the action, slide back the retaining catch and push in the cocking bolt. The rifle’s now ready to go, so safe shooting practice at this point is to pull back the rocker style safety catch sited on the left of the action just rear and above the curved metal trigger blade.

Again, at risk of sounding like a stuck record, the action block has an uninterrupted flat receiver that BSA use on all their PCPs, and it’s a great base for fitting any optic or NV scope. Making a considered sensible scope choice lead me to fit a Hawke 4-12 X 40AO Airmax AMX reticle optic in a set of special, medium height two-piece mounts Sportsmatch UK make specifically to fit BSA’s unique 13mm wide scope rails.

The 2-stage, fully adjustable trigger unit is a very impressive mechanism, the nicely curved metal blade has a well-rounded outer edge, which some shooters prefer over a ‘flat’ fronted inward curve design. Most shooters will have their own personal preference, but I feel that on this particular compact hunter carbine the blade is ideal for finger contact and trigger feel. It now also has what the company term ‘Enhanced Trigger Function’ for better shot control. Without doubt it’s a very responsive unit and one that predictably trips the sears crisp and cleanly.

The manually operated trigger safety lever is also a classy mechanism; pull back to engage and push forward to put the rifle into live fire mode. The letters ‘S’ and ‘F’ are etched in white on the action block directly above the lever’s finger friendly pronounced round dome head lug. Shooting from a rested position, tight ½” clusters out to 30-yards became the norm but I’d have expected nothing less. All models of Ultra SE are now fitted with what is termed a lightweight ‘fast-strike’ hammer system that gives increased efficiency through the charge for each and every shot.

Now we come to the dual suppression system, first seen on the R-10 Mk2. Termed CCS (Customer Configurable Shroud) this innovative design uses clearly visible vent holes in the shroud to help dissipate the air that directly follows a pellet when fired.

At the front, the secondary silencer of the system takes over, report being further reduced by a combination of internal baffles and spacers, while vent holes are also clearly visible in its design.

As it comes fully ‘setup’ from the factory you’ll notice both combine to make a remarkably efficient sound suppressing ‘tag-team’, because this is one of the quietest carbine size PCPs on the market. However, as the name clearly implies, the shroud and front silencer can be configured to suit your personal preference. This is achieved by removing the shroud (which exposes the free-floating cold hammerforged barrel) and the secondary mod’ is then re-attached at the muzzle with an adaptor supplied. It’s just a case of removing and resetting a few fixtures, but I’m sure most hunters will leave this ‘twin-set’ as they are.

To my knowledge, there’s no official number of how many Ultra SE CCS MS PCPs are to be manufactured in this format, only that there would only be a short run available in the black pepper stock. However, what I do know is after a very enjoyable test period, I think they’d be well advised to take it off the ‘when it’s gone it’s gone’ list. Not only does this rifle perfectly compliment and complete the ‘Ultra’ family of compact PCPs but it’s also a superbly featured hunting machine that belongs in the field. A ‘no limits’ air rifle you could say when you consider it’s possibly the finest carbine sized PCP the company has produced to date…