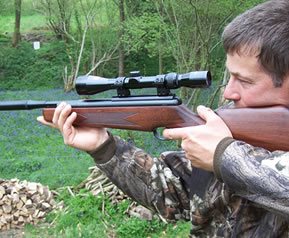 I was sitting under an old oak tree in late September, deep in the Sussex countryside at dawn anticipating the imminent arrival of a Roe doe and fawn to feed on the acorns that were dropping noisily all around me. As I sat motionless the squirrels darted frantically too and fro, and the odd rabbit ambled up the still leafy ride before me, it was not photographing the Roe I was now thinking of, but what a great morning’s airgun hunting I was missing!

I had recently been testing a new deluxe version of the BSA Lightning in .22 calibre, a design that seemingly has reached epitome of its design potential. The new Lightning (dubbed the XL) is a real no nonsense carbine sporter with few frills but a good solid performance. In situations like these, with squirrels and rabbits at only 25 yards, all you need is a competent spring piston air rifle to get the job done, and in this instance my mind had chosen that little XL which had proved so accurate and powerful when I was testing it for this review.

True I like expensive fancy airguns just like the next person, but there are times when all you need is a rifle that will get the job done without the anxiety of whether you are going to get the stock scratched or bluing ruined. The Lightning XL is certainly one rifle I found very hard to criticise. It’s really all any hunter needs to eradicate a vermin problem or bring home a tasty rabbit meal for the table.

First impressions are of a solidly built sporter, but internal and exterior components have been brought right up to date with some crucial new technological know-how, probably inspired by John Bowkett, airgun guru to BSA.

Most noticeable is the 1 inch diameter ‘fixed’ moderator which is 11” long and almost shrouds the carbine length barrel. The moderator is actually constructed in three sections with a pronounced rounded forend and tapered rear section. The voluminous space inside the moderator provides the XL with the quietest muzzle report on any spring gun I have tested. What is more remarkable is that the 12 groove rifled BSA barrel is only 10 inches long so there is sufficient muzzle blast to tame, but tame it, it does - very impressive, and one of the reasons I like this model so much. The moderator also acts as a good muzzle weight and cocking aid.

The breech area remains unchanged, with a sprung locking latch and hardened pivot pin ensuring a return to the same lock up spot everytime for optimum performance from the Lightning for many thousand rounds.

The compression cylinder has a hard wearing satin blued exterior finish, and on top sits BSA’s maxi grip scope rail with its synthetic “buffers” that will keep any scopes reticule safe – although truthfully there’s little recoil on the XL.
Internally you have the conventional spring and piston set up, but with the use of lubricants and a high efficiency coiled spring, there really is smoothness to the XL`s firing cycle and little noise to distract the shooter. Lock time is impressive too, with little time lost between pulling the trigger and the pellet exiting the barrel.

To the right side of the rear of the receiver is the simple yet effective manual re-settable safety catch - forward to ‘Fire’ and rearward to be ‘Safe’. The trigger is adjustable, although the factory setting was fine for me. I personally did not like the black alloy trigger blade, but it does not detract from the performance in any way.

All this smooth operating hardware is useless without some solid bedding platform for the action to sit in. The old Lightning stocks were plain, to say the least, but the XL stock has changed that. The finish still has that utilitarian feel with a strong beech wood instead of walnut, but some new design features have giving it a more user friendly feel and much better looks too.

The forend is long enough, and although I don’t particularly like the new machine chequered side panels, they are effective in giving a non-slip surface. (Editor’s note - they also keep the gun affordable!) Length of pull is 13.75 inches which is actually too short for my 6’ 3” frame, but is nonetheless right to fit most adult users. It certainly does not impede the use of the trigger and places the forefinger pad just on the trigger blade with a good degree of control. The pistol grip is quite upright which I like, and the slightly raised cheek piece is fine - the XL can be comfortably shot by left handers too. The rubber ‘recoil’ pad gives great adhesion at the shoulder.

Overall you get a sense of solidity in the construction of the new XL. Indeed with a weight of 6 lbs - and 7.5lbs plus scope and mounts - the Lightning is fast in the shoulder, yet its solid feel certainly deadens any movement on firing. In fact the firing cycle is very smooth, and predictable enough for you to follow through cleanly on each shot. This no doubt contributes to the good inherent accuracy. At 30 yards I set some targets and placed a chronograph 10 feet in front of the muzzle to record velocities and consistency figures. I shot several pellet brands and found that the little XL put up very good hunting groups indeed.

Cocking the XL is a doddle. A sharp tap to the end of the moderator opens the barrel and breech union. A smooth effortless cocking stroke is all that is needed to engage the trigger sear and this can be done very quietly - also of interest to hunters, I am sure. Pop a pellet in the breech, close the barrel and line up on target. The muzzle report was anything but loud, and I will stick my neck out here and say that the XL’s report is probably the quietest I have tested, really a very dull thump, and at 30 yards range it’s inaudible - brilliant.

Accuracy at 30 yards was well under an inch with the Premiers, Field Target Trophy, and Air Arms Field producing the best groups. My personal choice would be the FTT`s over the others for hunting at 30 yards, because of the slightly higher velocity of 585.0 fps and energy figure of 11.83 ft/lbs to get as flat a trajectory and heaviest impact from that .22 pellet as possible.

All in all this is a great little air rifle, and fairly inexpensive too. Its built to take some abuse and still perform, in fact I was so taken with the XL that I must have shot nearly 3000 pellets through it, it was so instinctive and fun to shoot. If you are in the market for a reliable, accurate and powerful little spring air rifle, I would have no reservation in recommending the BSA Lightning XL - it’s a steal.