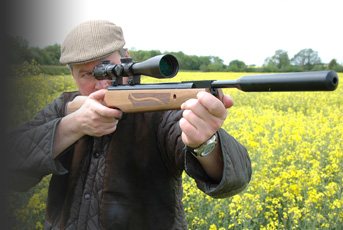 Conventional break barrel air rifles still account for a sizeable section of overall sales across the airgun market. New designs come and go, but with the meteoric rise in pneumatics over the last two decades, you could be forgiven for expecting the humble ‘springer’ to be well and truly side-lined - yet nothing could be further from the truth.

Of course the recoilless pneumatics make our lives easier, by virtue of their forgiving nature, yet despite flattering an average shot with far greater returns in the accuracy stakes, something is still missing in my view. The reliance upon an external power source is at the heart of the problem, and for this reason alone, many just never take to the new technology. Hunting trips can be thwarted and spontaneity curtailed as a direct result of needing to refill a PCP. Is there or isn’t there sufficient air in the reservoir? An occasional stumbling block to just grabbing the rifle and taking to the field.

There are no such issues with the spring powered option, and the break barrel still takes some beating for pure satisfaction and simplicity in operation.

Cometa airguns are a Spanish brand, and in my view one of the best makes of spring powered airguns on the market. I have long been a fan of their Fenix 400 model, and I have here the very latest version on test; the Cometa Fenix 400S Carbine Premier model. This sports a brand new walnut sporter stock, which basically affords the highly successful Fenix action some added class. We’ll return to that woodwork in a moment; but first let’s see what else is on offer with this model.

The shortened action sees the barrel trimmed to 9 inches, and then balance and leverage restored by the addition of a satisfyingly chunky silencer. Around the breech, all important attention to detail is on show, with the use of a small keeper screw on the main breech jaw bolt. Wear on the breech axis point is always a consideration with the traditional break barrel configuration, but Cometa take the necessary steps to hopefully eradicate any future problems in this area.

The scope rails cut into the receiver are a little short, but by extending all the way to the rear, they accommodate most potential mounting positions. Standard of finish is good, but given a few little blemishes on the metalwork, as the rifle came supplied,  the blueing is clearly not as thick and lustrous as some.

Back to the furniture, and whilst that cheek-piece looked a little vague and low, in use, with a sizeable MTC scope onboard, sighting and mounting was absolutely fine.  The panels of laser cut chequering are deeply cut and provide an assured grip as well as contrasting beautifully with the walnut’s natural grain pattern. Whilst the stock configuration is that of a very average sporter, the pleasantly angular forend tip has the direct result of giving this rifle the feel of a Theoben - and that’s obviously praise indeed. Couple that with the aforementioned quality timber, and this Carbine Premier variant begins to look an enticing proposition. Indeed if the test model was representative, then I can certainly vouch for some very pleasant walnut figuring.

Cock the rifle using that chunky silencer, and the comparison becomes even more interesting, since the quality lock-up of the breech is highly impressive. A fair amount of effort is required to initially open the breech, but it’s more a case of technique, and with a deliberate sharp downwards stroke, the task soon becomes easier. Compressing the mainspring nearly always produces some groans and scrapes from a new factory standard spring powered action, and this Cometa was no different. On firing the action though, the test rifle displayed a slick snap, with little in the way of detectable spring resonance - indeed the holy grail where this type of airgun is concerned. Besides, almost all spring/pistons actions get better with use as they are ‘run in’.

The trigger utilized on these 400 models is above average, with an adjustable two stage action, which is capable of reasonably light settings. Significant creep always seems to be present, but with practise, the unit can be tripped reasonably predictably. The blade itself is rather disappointing, being a little too narrow on the facing edge. Why it can’t be moulded with a wider spade, spreading the load even more, I’m not quite sure. However, this is a niggle that is easily rectified by the addition of a broad trigger shoe.

An automatic safety catch is brought into play in between shots, which whilst a little irritating, is reminiscent of the great FWB Sport design, and as such, is at least slick in use.

Over the chronograph, the Cometa’s power plant was clearly consistent, with Falcon Accuracy Plus pellets returning an excellent 8fps variation over 10 shots. Energy levels were however a tad low, at around 10.4 ft/lbs with a variety of pellets; JSB and Logun Penetrators among them. Give the action time to bed in and I would expect these figures to improve. Pick up another example of the same model for that matter, and the results could well be different in any case.

Over 30yds the .22 JSB’s were reasonable, returning 3/4inch groups, yet Falcon Accuracy Plus pellets were clear favourites throughout the sessions, with 1/2inch clusters the norm.

Balance is an issue with any rifle, yet from the kneeling and standing positions, I found this Carbine Premier to be a fast-handling operator that could hold the target.  I had the full weight MTC Mamba optics onboard, so a lighter scope could well make a difference here; but I was suitably impressed nonetheless.

What we have here then is a high quality adult sporting rifle, ideally suited to hunting and maybe specific class Hunter Field Target shooting. Consider that asking price, and I reckon it represents outstanding value for money, especially when pitched against many far-eastern offerings, which may be similarly priced, yet can’t come close for sheer performance.

Any shortlist of quality adult break-barrel rifles would always include the Cometa Fenix 400 if I had anything to do with it. This new version just serves to confirm exactly why!