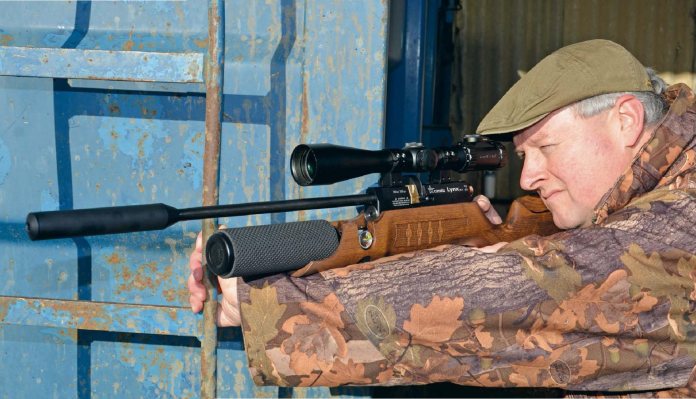 Better known for their traditional, spring-powered hardware, Spanish brand Cometa, can now boast several pre-charged pneumatics (PCP) in their lineup. I’ve been a big fan of their operation for years, and whilst I can’t always quite put my finger on it, the fact that their kit is invariably stylish and well put together, is a big part of the attraction. My gun on test is the Lynx SPR Compact, which is a somewhat scaled down version of their buddy bottle fed rifle, supplied here in tasteful walnut. With the scalloped woodwork apparently the result of a weight saving exercise, the result is a rifle that’s not only practical, but looks distinctive too. You’ll not get much change back from £900 mind, which is a significant figure. So, two questions; does the Lynx SPR Compact deliver where it matters and more importantly, is it worth the asking price? Time to get hands on for a full evaluation.

Inside the box alongside the gun, you’ll get a bag with Allen keys, spare O-rings, the Foster valve adaptor, and a cassette-style magazine- 13-shots in .22 calibre as tested, or 16 if you opt for the .177. The Lynx SPR Compact has plenty more features too, starting with that compact buddy bottle. Sling swivels come as standard, the stock shows an adjustable cheek piece, always a good feature, factory silencer, side-lever cocking, regulated power plant, power adjuster, Cometa’s own barrel, dovetail rails, manometer, and adjustable 2-stage trigger. So far so good, as the spec shows some promise.

Several components get the bling treatment too, with the rear lever anchor and side-lever handle in aluminium finish, and the inner breech block and trigger blade gold-anodized. That angular trigger guard is the final detail, and the end result is, as mentioned, a very distinctive profile.

Pick up the Lynx SPR Compact, and the build quality and overall feel is very impressive. That slick walnut timber is ambidextrous in configuration, and if I adopt the usual reach forward with my lead left hand, the extended tongue of wood under the buddy bottle, is just enough to keep my pinkies from cold steel. That’s a good start, but for those with an even greater reach, akin to an orangutan, then Cometa thoughtfully wrap the bottle in ultra-cosy, soft foam rubber. It’s not a slide on coat, since this material is actually stuck to the air tank, but it’s a nice touch, and frankly a world away from the horrors of some of Cometa’s rivals- where the icy bottle is the forend, whether you like it or not! No big deal in the Summer, but come those Winter mornings, and it’s a subtlety that really comes into play. At the other end, part of the graceful lines come from the way the design removes unnecessary wood from the underside of the butt, leaving a super sleek rear end.

In the aim, despite thinking the filling valve recess was going to be where my lead hand wanted to go, the only irritation proved to be that sling swivel. Nit-picking, but you know me and in truth a minor detail. Well, it can be removed if really necessary. I love the laser-cut detailing/ chequering and as well as the name ‘Lynx’ smartly picked out on each side of the forend, there’s also the Cometa logo, etched into the base of the pistol grip. ‘Laser-applied’, means everything is pin sharp. And with the subtle matt lacquer finish, there’s a classy feel, which still allows the beauty of the wood to shine through, for full appreciation.

Cometa manufactures their own rifled barrels, and this one gets finished with chemical bluing. It’s not exactly mirror finish, and it’s best described as lack lustre, but the upside is that it’s practical, along with the black matt of the breech block.

Having the luxury of an adjustable cheek piece is a big plus, and it’s well worth spending a couple of shooting sessions just fine tweaking this until your head just sits in the right place for that perfect, relaxed sight picture. Just slacken off the two chunky hex bolts, but keep some resistance, slide the cheek up until there’s the mildest pressure between the face and the wood, and a repeatable full sight picture should be the result.

The factory-fitted silencer is threaded ½ x 20 UNF, and can therefore be removed in a second, and replaced with a muzzle brake, or just a different moddy. As it stands it certainly does a good job of taming the muzzle crack generated. To charge the bottle (in situ), pull away the small rubber cover from the air valve on the underside, and snap the airline into position, using the Foster adaptor supplied. A big plus point goes to Cometa for the perfect positioning of the manometer, neatly recessed into the left side of the stock, and with the gun laid on its side, it’s easy and safe to read the dial. Slowly fill to a max of 200bar, bleed and remove the airline. Replace the dust cover, and the manometer should now read fill pressure.

It now just remains to get the mag up and running, and at this point, for those unfamiliar with this type of magazine, I have to say that the basic instruction leaflet supplied, would have you confused, given that half the detail is missing! Anyhow, it traces a familiar pattern, as follows:

Wind the clear cover anticlockwise, right round against spring pressure, then drop the first pellet, skirt-first into the one exposed chamber from the rear.

This holds the mechanism back. Now fill each chamber in turn, head-first from the front. Close the lid, pull back the rifle’s side lever to cock the action, then push the mag into its slot from the right side, until the slotted end snaps into place around the small locator bar, on the left side of the breech. On test, I did find the mag slipped round occasionally, as the slotted end had missed the bar, and was riding up. Slightly annoying, but a more precise approach should pay dividends.

That flashy 2-stage trigger is actually adjustable for length of first stage, length of second stage, and final release pressure, yet as it came supplied, it was fairly light and predictable, so I left it as delivered, after all, and as they say, if it ain’t broke don’t fix it! This model utilizes the MKII version of the Lynx action, and with a factory regulator fitted, consistency should be reasonably tight. The modest sized buddy bottle means shot count isn’t intended to be huge, and on test, starting with the chronograph, I recorded a total of 80-shots from the 200bar fill pressure, using Air Arms Diabolo Field pellets straight from the tin.

A total velocity spread of 29 fps was nothing remarkable, but respectable, nonetheless. Cometa specify this model with a power adjuster screw, which sits to the rear of the action, and once the top keeper screw is slackened off, the rear bolt can be used to fine tune energy levels. It’s a handy feature, which is useful in ensuring that we stay the right side of the law. Make any adjustments in conjunction with an electronic chronograph, and it can be a really valuable feature.

In terms of ability, ½” groups over 30 yds were competent enough, but when I switched to loading single shot, straight into the breech with no mag, they pleasingly closed up to half that figure, so food for thought. I really like the handling and feel of this scaled down Lynx SPR, but this sector of the market is now super competitive, with plenty of choice, across a range of prices and individual features.

If I’m honest, that gold effect block around the breech does look a bit of an afterthought, and the unsubtle way the magazine locates is a source of minor irritation. But put those negative observations to one side, and it’s difficult not to like the Cometa Lynx SPR Compact. It balances well, has a quality feel with a high standard of finish, and performance with the right pellet is well up to the mark. ASI, the UK Importers, are currently offering a black stocked version, but the quality of the timber on my test gun is such that, you really do need a talking to, if you take that path! Sorry, what I meant was, the choice is yours.