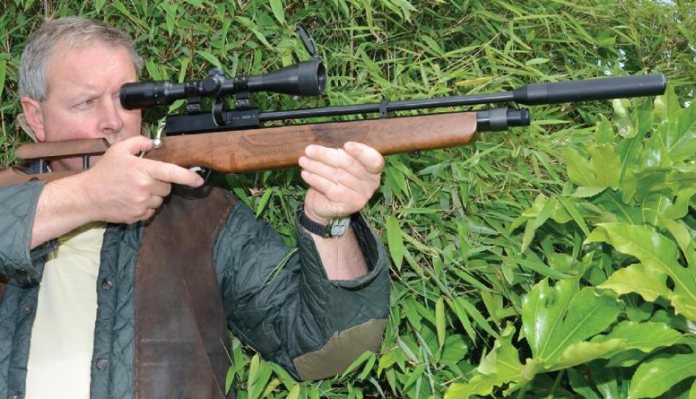 Spanish brand, Cometa, is an old, family-run business, known for their traditional spring-powered airguns; so understandably, the leap into the world of pneumatics was some while coming! Their buddy bottle fed Lynx model was the first to make it off the drawing board into full production, but their latest creation, in the form of the Orion, looks set to cause quite a stir, for the more traditional among us.

Take a look at the Orion SPR’s tasty spec list, and on paper at least, it starts to look like a whole lot of airgun for the money. Given we’re talking a tad under £400; you’ll see what I mean. Conventional barrel-over cylinder configuration, comes with a multi-shot bolt action mechanism including cassette-style magazine, an adjustable walnut sporter stock, two stage trigger, sling swivel studs, sound moderator, pressure gauge, and quick fill air valve. For the record, the action isn’t regulated, but as we’ll see in a while, this hardly seems a problem!

Of course, that highly attractive woodwork is what initially catches the eye, and the piece of walnut used for my test gun certainly had plenty of character, with nutty orangey browns and swirls all over. But leaving looks aside for a moment, there’s two key features with this ambidextrous sporter stock that earn it a massive thumbs up.

Firstly, the inclusion of a height adjustable comb/ cheek piece section means eye scope alignment can be effectively set for the individual. Secondly, that unusually long forend means handling wise, the larger framed among us (myself included) can feel right at home, with extended grips nicely accommodated. Laser-cut chequering adorns both the pistol grip and the forend, and this is both stylish and perfectly executed. Quick detachable (QD) sling studs are a nice touch of course and always a most practical feature too!

Where build quality is concerned, this is a very impressive rifle. All the components stand up to close scrutiny, looking well engineered and finished. The sturdy breech block gets treated to a matt black finish, whilst the barrel and main cylinder are chemically blued- which is to a good standard. Maybe a little dull when compared to some of the main market leaders such as Air Arms or Weihrauch, but still very even and again, well executed.

Two areas up for niggling criticism has to be firstly the rather thin matt finish applied to the sound moderator, which already showed signs of the finish wearing at the edges, before I’d even got to it. Admittedly this I suspect was partly due to clumsy transit, with a few small loose items kicking around the box, but effectively a test of the finish if you like. My other gripe concerns the small amount of play around the magazine cassette, once it is pushed home within its slot in the breech block.

Time to ready the action and first stop is to get 200bar of air into the system. Cometa fit these rifles with a Foster-style quick fill valve, and that just needs the front valve cover to be pulled away and the airline snapped onto the valve; be that from a diver’s bottle or dedicated airgun pump. An on-board manometer sits underneath the forend (which is a nice safe location), and this allows for the residual pressures to be checked. Charging, as always with PCPs, should be done according to the gauge on the air supply, which would normally be that bit more reliable!

With the cylinder pressurized, we now need to fill the 13-shot magazine and this is done by first pulling back the chunky satin cocking bolt at the rear of the action, until the hammer mechanism is heard to cock. The magazine can then be pulled clear from the right hand side.

Filling the magazine (which is very similar to the Theoben design) is basically as per the FX routine, where the Perspex front needs to be twisted anti clockwise all the way round, until it comes to a stop. Then, whilst holding the lid against the spring pressure of the mechanism, turn the mag over, and insert a pellet skirt first into the one open chamber. This now stops the lid from moving, and the mag can be turned right way up, and pellets chambered head first in turn, in the normal way. With the mag full, it can be pushed home into its slot in the action, so the mag groove locates over the small side bar in the action. Close the bolt, and the first shot is ready. As usual, sounds fan dangled, but in practise, it takes seconds. Subsequent cocking of the bolt cycles each shot in turn.

Final preparation has to include getting that cheek piece set to the right height, and this just needs the two Allen bolts slackening off, so it can be slid up or down on its pillars, and the bolts then nipped up again once eye/ scope alignment seems right. It’s a great feature, and allows the stock to fit the shooter.

Shoot this model, and you soon realize the sound moderator is doing its job, as muzzle report is significantly reduced. A half decent, two-stage trigger always helps downrange performance and the Orion certainly has that. A nicely shaped aluminium blade, and an adjustable mechanism with a reasonably light let off, is a great start. Add to that a well designed manual safety catch bar, i.e. it only features when you want it to, is just as it should be in my book. Cycling the bolt on my test rifle was occasionally a bit sticky, but overall, I had no malfunctions regarding pellet feed and the magazine.

Moving on, Cometa’s inclusion of a barrel clamp towards the front of the action, which appears to hold the barrel fairly tight, without an O-ring, certainly flies in the face of accepted wisdom surrounding PCP configuration. That said, I didn’t notice any adverse effects over the course of my test period. But if this were my main rifle, I would be tempted to remove that clamp altogether, or have it drilled out to allow for barrel movement and flexibility with respect to the fluctuating pressures within the main cylinder through a charge.

Given that this Orion SPR has no regulator fitted, I was intrigued to see how many shots it could produce from the 200bar pressure fill. Using Air Arms Diabolo Field pellets, it soon became quite clear over the course of my chronograph session, that the Orion’s internal valve design is quite exceptional. A total velocity spread of 20 fps over 140-shots, without a regulator, is superb, and to be honest, the equal of several top flight models that do feature a regulator, make of that what you will! Quality ammo was used throughout admittedly, but those are still excellent figures, whichever way you look at it!

Bucking the market trend, Cometa actually fit their own barrels to this model, instead of the usual industry standard Lothar Walther-spec tube that so many companies use these days- and it certainly proved accurate on test. I managed the occasional ¼” centre-to-centre clusters over 25yards, when I did my bit, with easy ½” groupings at up to and over 35yards. I did experience the very occasional flyer, but I would probably put that down to the fact that there is plenty of play in the way the magazine slots into its housing within the action block. When I say ‘flyer’ though, we are talking a shot that would increase a group to just outside the quoted ½” at at 35 yds, from a super tight ragged cluster. So still very good, and better than many rivals in terms of raw accuracy.

Cometa are actually producing several versions of their new Orion:- the standard model, which comes complete with fibre optic open sights fitted, the ‘SH’, denoting the full length shrouded barrel, the ‘BP’ Bullpup model, and the ‘SPR’, which refers to silenced pneumatic- tested here. UK importers, John Rothery (Wholesale), are sticking with the standard and SPR versions for now, but demand always dictates the pace.

As it stands, this Orion SPR gave a very good account of itself on test, and is just an enjoyable gun to handle. An RRP of sub £400 makes it very competitively priced, given that full spec sheet, and with solid performance figures thrown in, it’s hard not to be very impressed indeed.