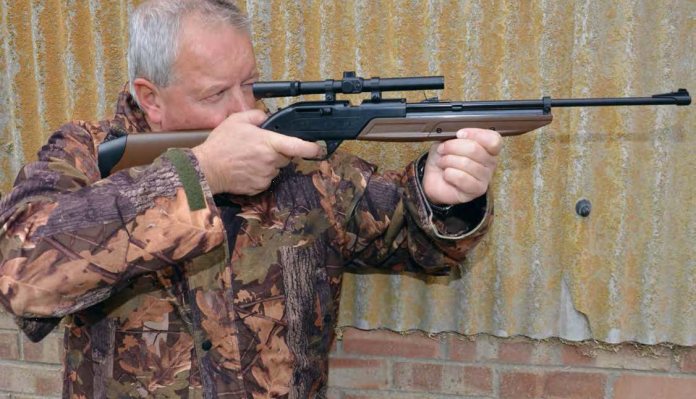 For any sport to survive and develop, young blood is vital, so it falls to all of us to promote our activities and make a concerted effort to attract youngsters into the shooting sports. Starting them at a young age under correct and full supervision is the key to getting them onboard, but having appropriate hardware, designed specifically for juniors, is a big part of the equation.

I’ve always been a fan of the American brand, Crosman, since my teen years, dabbling with their timeless Medallist American Classic pump-up pistol. It well and truly set the ball rolling, giving me an appreciation of the self-contained pump system which promises so much. ‘Pump-up’ airguns seem far more popular in the States for some reason, so few airguns of this type seem to make it across the pond, yet one favourite, aimed fairly and squarely at the younger shooter, is the model on test here - the Crosman 760 Pumpmaster Classic.

In fact, it was almost 10 years ago to the day (blimey that’s worrying!) that I tested an earlier version of this model. It had a 5-shot clip and a slightly plainer stock. The latest revised version here has dispensed with the clip and instead, offers the option of using either BBs or firing pellets single-shot.

So, first impressions? Well, on opening the protective box, I must admit that there is a cheap feel overall, and there’s no point in pretending otherwise since this Crosman has clearly been made down to a price. The compression cylinder and barrel are steel, but everything else is plastic/ synthetic. The upside, however, is that weight is dramatically reduced. This is a deliberately scaled-down gun for the junior shot, and couple that with the super light weight of just 2.2lbs (yes, that isn’t a misprint), those little people, trying our sport for the first time, are going to find handling this gun very easy indeed. In fact, that crazy weight must make this the lightest rifle I’ve ever shot, so a great start on the junior gun tick list.

Crosman, now all part of the Velocity Outdoors umbrella group, supplies the Pumpmaster complete with a 4x15 scope and mounts, but whilst I appreciate this is a budget offering, and with all due respect, there’s no getting away from the fact that the scope really is a shocker, with a dark and murky image. To be honest, there are plenty of bargains to be found in starter optics these days, so I would invest maybe £20-£30, either on a 4x32 scope or some sort of red dot sight. Alternatively, just utilize the open sights that come fitted, certainly until our junior learns the ropes.

This Pumpmaster Classic is available in .177 calibre only, and as mentioned, can take pellets or BBs. The latter are stored inside the slide access door under the grip. Flick the switch to open the reservoir and you’re away. However, my views on dodgy BBs are well known, so stick to pellets, as you’ll avoid ricochets and the accuracy overall will be more rewarding.

OK, time to see what this gun can do. This is a multi-pump system, which allows the shooter to use a minimum of 3 pumps, up to a maximum of 10 pumps. Just to confuse things, the instructions state categorically not to shoot using less than 3 pumps, yet the box comes brazenly printed with velocity figures for 2 pumps! Make up your minds lads. Anyhow, take it from me, 3 pumps make sense, as you’re less likely to experience a barrel blockage, plus it’s so easy to achieve.

The entire forend is the pump handle, so to pump the action, grip the forend and pull it down and all the way forwards in an arc. Make sure that it’s a full arc outwards, as this will aid consistency. Next, pull it back and close up the lever. It’s the return stroke that compresses air into the cylinder, and Crosman makes much of the way they have designed the pumping action to be consistent, irrespective of the number of pumps undertaken. On test, I found effort does slightly increase, yet pump number 10 is still surprisingly manageable.

The pump system is impressive then. Not so impressive is the rather uncomfortable and badly shaped cocking handle. How this ever got through a feedback meeting at the factory I’ll never know, as it sports a pointy edge - nice. That said, it does the job, and the effort is still minimal, so I’ll contain my whinging. Pull the handle to the rear (once pumping is complete), and this exposes the loading channel. Roll a pellet across and into the lip of the breech. Close the bolt and the shot is ready. There is a cross-bolt manual safety if needed, and as for the trigger, this is reasonably light and works well.

During testing, I found that this Crosman produced around 5 ft/lbs of energy after 6 pumps and only 6.6 ft/lbs from the full 10 pumps. In the end, I concluded that the effort simply isn’t worth it. Consistency did seem to improve the more pumps used, along with slightly tighter groups, but overall, I would advise sticking to 3 pumps and having some fun sessions with minimal effort.

On test, the airgun managed 10-shot strings with a total spread of 18 fps using three pumps, and 16 fps using 10 pumps, giving you some idea of what is possible. Accuracy seemed slightly better the more pumps used, yet with end-on drinks can-sized clusters over 20 yards with just 3 pumps, it’s still a whole lot of fun for minimal effort.

Undoubtedly, the pumping cycle is an integral part of the Pumpmaster, and the fact that you can vary the number of pumps is all part of the appeal. Add in that incredible lack of weight and this American classic is unlikely to disappoint where its target audience is concerned.