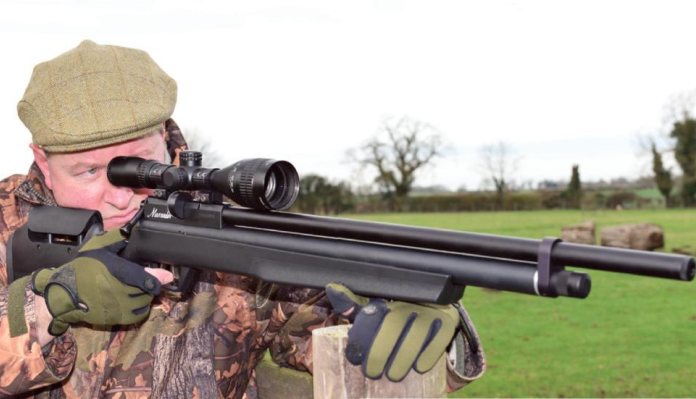 If something works, then it’s little wonder that manufacturers flock to get involved, and the modern PCP is a classic example. Line up several pneumatics from different manufacturers, and the basic blueprint will no doubt be identifiable through each model. It’s all about accepted configuration, and the ‘barrel over cylinder’, linked via a figure of eight clamp at the muzzle end, has stood the test of time.

Benjamin’s mainstay in this market has been their Marauder model, and with some subtle upgrades implemented of late, we thought it about time to re-evaluate this stalwart of the range.

Benjamin as a famous old American brand lives on, as part of the mighty Crosman Corporation, and the Marauder is a fitting model to bear the company name. My test rifle came with an ambidextrous synthetic stock, and weighs in at a very reasonable 7.3lbs.

Bear in mind that this model fitted with the wooden stock tips the scales at 8.2lbs, and it could be a deciding factor for those who wish to keep heft to a minimum. The synthetic compound has a nice feel to it too, whilst the configuration is impressive. A nicely angled full pistol grip and that super long flared forend give the Marauder a great start, and I for one just love the handling. With all the action treated to a smart parkerisedstyle of finish, this model’s practicality is there for all to see.

Specification-wise, this is a pre-charged pneumatic to be filled with conventional air, either from a diver’s air bottle, or dedicated hand pump. The original model, when launched, was specified as ‘dual fuel’, with customers Stateside given the option of CO2 as an alternative power source. There’s now no reference to that route in the owner’s manual, so everything stays conventional this time around. A 10 shot bolt operated magazine, two stage adjustable trigger, full-length barrel shroud, and adjustable cheekpiece, all help bolster an impressive list of features, but that bold American/ Benjamin feel is what these guns are really about.

So just how does this latest version compare with the original Marauder? Well, firstly, the factory has installed what they term a ‘de-pinger’ to reduce the shot noise, valve/hammer vibration. The breechblock has been simplified, making it more aesthetically pleasing, as well as offering a more rigid stable support for scope mounting.

But possibly the most important change of all in my book, has to be the trigger being set further back to improve the grip. We’ll gauge the effect of these tweaks in due course; but first lets ready the action.

Crosman specify the fill pressure as between 2000- and 3000psi, so I opted for the highest figure, equivalent to 205-bar. Getting to the valve on the Marauder just needs the small cover to be unscrewed at the front of the main cylinder. With the 215cc air reservoir factory fitted with the ever popular Foster valve fitting, charging is made that little bit easier and straight forward, since most shooters I know have that style bayonet coupling on their air line in any case. Different makes utilise different valve adaptors and these can be switched as necessary, usually with the brilliant quick couplers from Best Fittings. These then normally just snap into the Foster end; but Benjamin’s approach is a breath of fresh air, simplifying the process further. It’s all what you get used to of course, but this is a great system.

Next to the 10-shot magazine. Pull the bolt up and rearwards to cock the action, and then remove the mag from the right-hand side. Similar in design to the old Theoben cassettes, although slightly smaller, these magazines work a treat. Filling procedure is as follows:

With the clear cover towards you, turn the front cover clockwise, all the way round, until the holes line up, and a chamber is exposed. Drop a pellet head first into the aperture, taking care to stop it falling through the casing. Then gently turn the cover anti-clockwise; dropping pellets head first into each chamber in turn until full. Push the full magazine back into the action until it snaps into place, (another satisfying feature) close the bolt, and the rifle is ready to go.

One final piece of prep work concerns the adjustable element of the stock. With a scope set in place, it pays to spend a while getting the head position set correctly, and with an adjustable cheekpiece all part of the design, the Marauder can really shine in this area. Two small socket heads just need to be slackened off with an Allen key, and the comb can be lowered or raised as desired, until the perfect level of support is arrived at.

The revised breech block, as mentioned is a super sturdy, one-piece affair, with 11mm dovetail rails for scope mounting, and it all feels reassuringly chunky I have to say. Bear in mind the pressure fluctuations of a modern pneumatic airgun, and the way different sections of the gun can expand and contract, and there are clearly many factors that need to be taken into account.

With this in mind, Crosman take no chances with the barrel shroud configuration, keeping the figure of eight clamp purely as a protective strap with full clearance all around between it and the shroud. Clamp this area tight, and the expansions and contractions within the cylinder can cause the dreaded zero shift. Crosman’s approach therefore makes sense. Further attention to detail comes with the action being rigidly fixed and supported at the trigger block end only. Look towards the front, and the small rubber pad under the cylinder is clearly visible, just offering gentle support, but no restriction.

On the range, using the Crosman Premier Ultra Magnum pellets provided by the importers, I soon had some tidy groups forming, and with sub half inch clusters over 25-yards, and groups the size of a 20p piece over 35-yards, all very easily achieved, the Marauder was clearly accurate.

Over the chronograph, shot count was near identical to my figures recorded with the original model, with around 60 shots in .22 calibre within 24fps, which is very acceptable. For those more casual sessions, where absolute consistency isn’t so vital, (and for the record), I recorded 110 shots, which roughly decreased by 10fps every 10 shots after the initial band of 60 shots. It is possible to double cock this rifle, and chamber two pellets at once, although it should be mentioned, that this occurred during fast cycling for the chrono test only.

The two-stage trigger has a perfectly shaped match style blade, and now sits well back, which really suits my style of shooting. The mechanism trips nicely and is fully adjustable for first stage travel, release point, pull weight, and position. As for the ‘de-pinger’ referred to, I’m not so sure, as the action still makes a distinctive ring to accompany the shot. Overall though, with that sizeable shroud in place, the muzzle report and action noise are hardly obtrusive.

As mentioned earlier, the feel and handling of the synthetic stock furniture just suits me perfectly, with that extended, flat-bottomed forend particularly user-friendly from a prone position.

One final nice touch comes with the inclusion of a de-gassing tool, to help dump all the air from the main cylinder, should it be required for maintenance etc.

As you may have picked up by now, I really like the Marauder. There’s a bold brash feel to it, and it just feels right in the aim. It’s well thought through, and with a host of features, and some decent down-range accuracy; it’s a damn fine airgun. Look at the asking price, and admittedly it represents a serious investment against strong opposition in this price sector.

As always though, personal taste holds the key, and for me, the unique feel of the Marauder should win over many fans, and deservedly so.