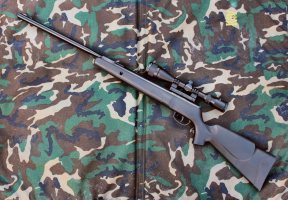 Usually when an air rifle, or for that matter any other shooting product, progresses to a point it’s given a ‘MkII’ designation, they’ve either been cosmetically modified or technically updated from the original bearing the same moniker or both.

In this case the Phantom Mark II covers all the above and, more to the point, this variant seems to bear no resemblance to the original Phantom whatsoever.

I say this as not only does the MkII model here on test omit open sights in favour of a bull barrel shroud/cum silencer, but the action also sits in a completely different stock design. Also, there’s a twist in the tale as, although the rifle clearly bears the words ‘Nitro Piston’ etched on the side of the breechblock, it still uses a spring piston power plant; not that this is easy to determine as you shoot the rifle, but more on this particular nuance later, as first I’ll begin by detailing what I feel many will agree is one of the rifle’s standout features – the stock.

The only similarity both models of Phantom share is that the action sits in a black synthetic ambidextrous stock. However, I’m sure many will agree that, cosmetically, the Mk II has a distinctive centrefire biased styling – in fact not that dissimilar to the Remington 700 series of rifles.

The sleek and stylish stock design features a generous and well-defined cheekpiece with a relatively low comb ending in a very substantially sized full black rubber buttpad. The slim neck is sculpted so both the palm and fingers of the shooting hand can easily wrap comfortably around the steep drop down pistol grip. The lengthy yet slim forend has a rounded underside and features lengthy panels of impregnated grip aids. Rather than being what we’d term traditional style checkering or stippling, the inner area of these panels (also seen at the grip) has, unusually, been given a leatherette finish. But fear not, as all combine to make the stock look very stylish and equally practical, as the more you handle the rifle the more you feel the benefits of the overall design. Reason being that it feels very solid and secure in the hold, balances well and, although pushing the tape to a full 44.5 inches in overall length, it comes quickly and easily up to the shoulder.

Incidentally, while the Mk II omits open sights in favour of the TAC-looking full-length barrel shroud like many other Crosman air rifles, the Phantom Mk II comes bundled with a scope and mounts. In this instance you get a Center Point 3-9x40AO optic and a sturdy one-piece mount, plus all Allen keys to facilitate fitting. So this package comes ready to shoot straight from the box, which many airgunners will find appealing. In fact the quality of the ¼ inch MOA open turret design scope and fixtures far exceeded my expectations, so like the rifle itself you could consider this a step upwards as well.

Due to the MkII having ‘Nitro Piston’ etched onto the side of the breechblock, as mentioned previously, I initially presumed this to be a gas-ram powered air rifle. Indeed even on cocking and first shooting the rifle, both the cocking stroke and firing cycle displayed the super-smooth action characteristic of a gas-ram. However, imagine my surprise on discussion with Crosman importers A.S.I Ltd when I was informed that the ‘NP’ stamp is a manufacturer error and in actuality the rifle uses a traditional spring and piston power plant! This makes the rifle even more impressive and, dare I say, unique, as if I hadn’t been told this I would have believed this was a gasram such is the ‘feel’ of the vibration-free firing cycle.

Not only is the cocking stroke very smooth, it’s virtually effortless due to the fact that the lengthy barrel shroud assembly measures 18.75 inches, so affords a good level of leverage. The lack of effort needed to cock the rifle is also aided by an articulated cocking linkage which also results in there not being an excessive amount of material ‘cut out’ below the forend of the stock, so solidity and strength of the ‘handle’ isn’t in the least compromised.

The barrel locks solidly in the open position for direct pellet loading, and thanks to a large wedge shape détente lock and generously sized breech seal when returned to the original closed position, it locks back up very securely with no worries that you have anything less than a very air tight seal.

After setting a 25 yard zero for the .22 calibre test rifle I really began to realise just how effective the bull barrel shroud is at taming muzzle report. It’s able to do this as the shroud’s end cap that screws onto the barrel itself uses strategically placed internal vent holes to direct expelled air upon discharge back down the inside of the shroud – hence its effectiveness. Also, due to the super-smooth firing cycle, the rifle is also very low in recoil for such a full-power springer.

The two-stage adjustable trigger unit has a neat-looking metal blade with the manual safety being positioned forward of this while both sit protected within an ABS trigger guard – a familiar configuration that is seen on many springers of this type. There is a small level of adjustment to help combat the rather lengthy first stage of pull. Some may consider this a downside, but once used to this particular nuance of the release I soon began making ragged one inch groupings at my set zero.

Although the rifle only weighs a tad over 8lbs scoped up, in my opinion this is definitely an adult-oriented sporter. Not only due to the lengthy overall proportions but the reach to pull measures 14.5 inches which some juniors and smaller build shooters might find a bit of a stretch.

Overall I found the Crosman Phantom MkII to be a wellbuilt, very smooth-operating, accurate and well-balanced full-power springer. Also, taking into consideration the quality of the hardware it comes bundled with, it’s also a stylish, ready-togo, practical and very capable air rifle, suitable for medium range hunting situations